What Does Fujifilm Have to Do to Compete in the West

An undeniable and long-standing staple in the photography world, Fujifilm's market share in the West is still fractional. With all of its innovation and strong reviews, one must ask, what more can Fujifilm do to increase influence in the Western market?

As more information surfaces on Fujifilm's 100-megapixel medium format camera, the announcement of a sequel to their best selling camera, and rumors of a GFX modular system, I can't help but wonder what Fujifilm have to do to compete in the West. You only need look at Digital Camera World's summary of Fujifilm's 2018 to realize they are putting in the hours. Their relentless innovation and production has raised eyebrows and garnered positive reception from the photography community at large, but one fact can't be overlooked: their market share in the West renders them almost irrelevant.

Allow me to take a step back briefly. I like Fujifilm cameras and I like their history in industry. I have used several Fujifilm cameras (one more if you'll let me include the brilliant Instax! No? Fine.) albeit not for any of my commercial work, and I'm always impressed. The build quality is high-end, the specs are strong, and they feel good to use. But when push comes to shove, would I buy one?

Alex Cooke and I were discussing the new 100 megapixel medium format monster Fujifilm are preparing. He was fighting the urge to get one when he can, whereas I essentially scoffed at the idea. Yes, its spec is brilliant and its selling points are alluring. Here's the summary from Cooke's article:

A lot of what the camera offers isn't unique, however high-end it may be. However, it has two huge attractions: brand new, modern spec medium format for under $10,000, and 100 megapixels. The former is far more intriguing than the latter for me. Honestly, I'm not sure what I'd need 100 megapixels for, and I do extremely long macro stacks for commercial use, including billboard printing. The fact is — as Fstoppers showed last year — megapixels are overrated for printing, no matter how large. The generous spec on a medium format camera, for a price closer to a top of the range full-frame body is far more interesting.

Whether you would buy it or not, it's an impressive piece of kit, well priced, and yet the only place Fuji are dominant is Thailand. Every 2018 report of market shares for cameras and lenses are utterly dominated by Canon, Nikon, and Sony, usually in that order. For video, Panasonic are a heavy hitter, admittedly, but if you want Fuji's market strengths, you'll have to depart from cameras and look at medical use picture archiving systems and film for polarizers. 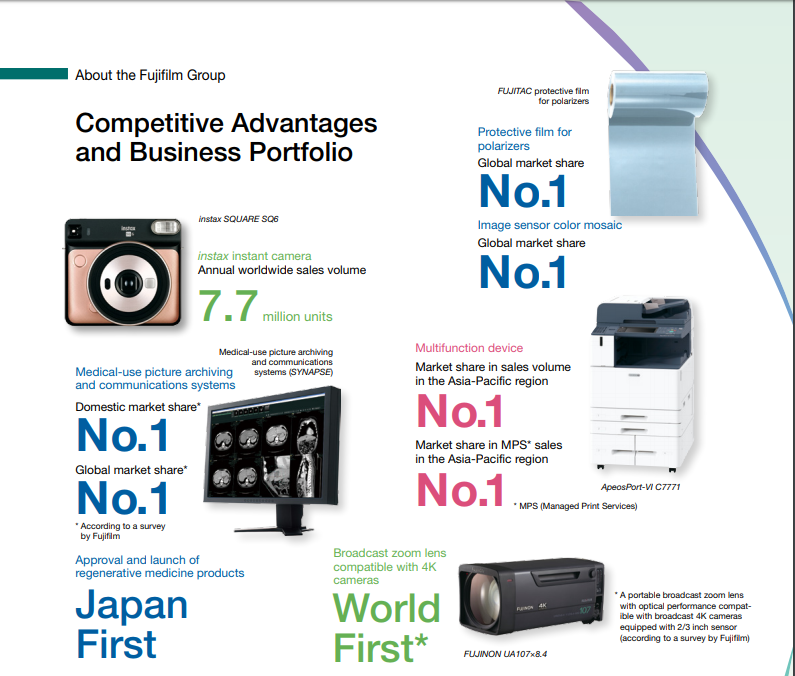 From the 2018 Fujifilm Holdings investors report.

So, why the deficit? Admittedly, there's always the concern over lenses, with favorites like the Sigma Art series only being made to fit either Nikon, Canon, Sony, or Sigma mounts. But having used adapters on Sony bodies for Canon lenses and vice versa, I can confidently say that adapters are not much of a worry anymore.

So I put this question to you readers, both Fujifilm and non-Fujifilm users, why are they not better represented in the Western camera market, given they are arguably working harder and innovating more than their rivals? What would it take for you to switch to Fuji?

I recently switched to fuji. The xt-3 (im mainly shooting video) just had too good of an offering with 4k60 10bit internal flog. Also in the tiny form factor and much improved autofocus and NOT micro fout thirds. Its the perfect gimbal camera. And a really (!!!) strong hybrid as its an almost even better stills camera. Perfect for my work and the price was amazing.
If they bring the xh2 with 4k60 10bit (raw externally?) with no crop (or maybe 4k96p 10bit?), IBIS, they would be THE go to option for video. Their marketshare would increase drastically!

Fuji's cameras are intimidating to novice photographers. The plethora of old timey knobs and buttons makes it look more complicated than it is. Sure it can shoot in shutter or Iris priority mode, or even full auto, with AF!
But it looks like a full auto camera.
However, when I took my artist sister to B&H to buy a camera, she shyed away from the Canon and Nikon bodies. They all looked like old 90's cameras, while the Fuji and Olympus 'looked vintage'.
Fuji should emphasize this more. They are not your dads camera!
The point about lenses is a good one.
There are only two companies that make AF lenses for X mount! Fuji and Zeiss.
No Sigma, Tokina, Tamron at all. And only manual lenses from Rokinon/Samyang and all the Chinese companies.
Someone on some message board implied that there must be a license fee on X mount. (which I doubt Mitakon Zhongyi is paying).
My friend that works at a massive Japanese import/export says she thinks it's a corporate rivalry thing. The other companies are lined up with Canon or Nikon, against Sony and Fuji. (Sony makes the Xtrans sensors for Fuji, Zeiss for X mount is actually Sony).

I started with film. All of the cameras I bought from 1980 - 1999 were full frame, including compacts. I started buying digital in 1999 for work. I bought 1 Sony Mavica and 3 Sony compacts. When I started looking for a "serious" digital in 2012 I took Ken Rockwells' advice and got a Nikon D3200 crop sensor. Then I bought a better Nikon crop sensor two years later. I was always planning to get back to full frame so that when the lens said 28mm I did not have to putz around in my brain to figure out what the field of view "actually was". Plus I like the depth of field you get with 35mm. I read all the glowing reviews about the all metal bodies and real dials and scales of the Fuji system. But I always wanted to get back to full frame.

Now I have bought two full frame digitals, one Nikon and one Sony. I like the perspective you get from full frame and have no intention to "go back" to a smaller size sensor. For smaller size sensors I will use the latest iPhone. And I have to say the latest iPhone XS Max's camera with "smart HDR" is amazing. Plus it's stereo mikes and 4 K video at 30 or 60 ain't too bad either.

I would be a very likely buyer of Fuji cameras if they were full frame. I very much like and still own retro film cameras with actual dials and direct controls. But no full frame and I am just not interested. I don't care about medium format. Not going there.

If i could afford to go full fuji I would :(

That main image up there is bonkers...Who holds a camera like that?

1. I do not understand Fuji's fascination with ISO and shutter speed dials, especially since they ALSO add command wheels. It seems needlessly redundant and silly to me. I mean the shutter speed dial isn't even in 1/3 stops so what's the point? I prefer 2 input wheels - one for my index finger and one for my thumb. With a Nikon DLSR I can make changes to shutter speed, aperture, and ISO all with my right hand and all without taking my eye away from the viewfinder.

2. Fuji should open up their lens mount and lens AF tech to third-parties like Sigma, Tamron, and Tokina. I would love to see all those Sigma ART primes for the X mount, or comparable APS-C ART primes. Sony did that and now there are E-mount Sigma ART primes.

3. Fuji's best flash, the EF-X500 does not have wireless radio triggering ability which means having to look at Godox, Yongnuo, and other sketchy brands. That's simply inexcusable.

4. I've read Fuji RAW files don't play nice with Lightroom. If that's still the case, it's a dealbreaker for me.

here they seem to do well in hipster capitol berlin, the people are using sony, fuji or old analog cams. the 90s looking nikon and canon bodies are becoming more and more rare. fuji is super appealing with its precious vintage retro look. more like a affordable leica. these people also don't wanna carry around bulky lenses.
for the pros - just look at the prices for the new nikon, canon, sony pro lenses - they are in the same range like the gfx lenses - often there are deals and they are much cheaper.
fuji is also a big player in the broadcast market.

I made the switch from Canon and I'm in love. Shooting with it is so much fun and I find images are much quicker to Edit because Some of the camera's color profiles get me already so close. The images that come out of the Fuji always blow my mind.

"they are arguably working harder and innovating more than their rivals" Really? While they do have some nice features they are not breaking new ground like Sony, for example, with their AF advances. That's not to say they don't innovate but hardly more than Sony, Panasonic, Olympus etc. Meanwhile, although the trendies might love the retro look and fiddly buttons and controls, mostly these are more of a fashion statement than a practical solution. I tried out the XT-2 and XT-3 (owed by a devout Fuji friend) but found them uncomfortable to hold and use unless I added the grip, in which case they were too heavy for my use. Also I could not seem to use them one-handed so I gave them a miss.

I left Nikon, a fine company. Sold everything and bought a Fuji XH1 and Fuji 18-55 IO lens. Bought this week. Some what daunting to learn all the menus, so took to my local camera store for help. Happy I bought local. Service is first class. At age 72 I think I made a good decision to “down size” but “upside” on this camera. Did a test shoot today. See attached shot. Not bad for a part time guy. Thanks Fuji. 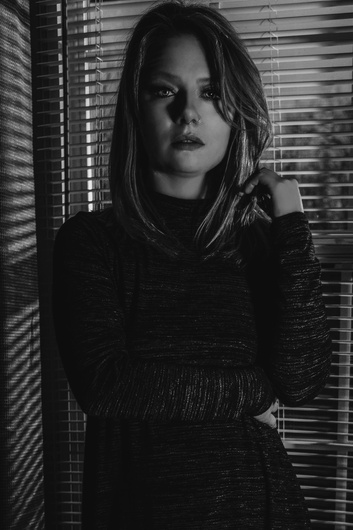 What is up with the ridiculous pose in the article's lead photo? I mean, really? Who holds a camera that way? And, why hasn't anyone taught them better?

How can you hold a camera like the woman does it on the picture?! Its quite ridiculous :D

From my perspective the answer is quite simple: make the GF lenses more affordable. The Fuji medium format appears to be fantastic, but spending 10 grand on a body and two lenses is prohibitive - in particular when the lenses are not even fast