Why Apple’s Expensive Monitor Is Worth It

If you’re out of the loop, Apple announced a brand new Mac Pro. It’s an overdue replacement for the previous trash can model, and I think Apple is getting back to their Mac Pro roots. It’s more cheese grater than ever.

In addition, we’re finally getting an update to the old Cinema Display that many loved. For the past couple years, Apple stopped selling these and instead touted LG’s 5K display. The latest Pro Display XDR offering is as in-house Apple as it gets, even down to the eye-watering price. The new 10-bit 6K monitor will cost $4,999, or for $1,000 more, you can get fancy new reflection-phobic glass.

If Apple's monitor is as good as they say it is, then it competes with the best. These are comparable Flanders Scientific reference monitors.

Your Display Isn’t This Display

I’ve said for a few years now that HDR is the future. When Apple debuted the iPhone X, nearly all of the lauded features pertained to watching HDR content. Netflix is behind it, HBO dropped the ball on it with Game of Thrones, and content producers need to get on board.

Unfortunately, reference monitors aren’t all the same, and newer standards like HDR10 and Dolby Vision can only be achieved with a certain class of display. That wouldn’t be a problem if these things were cheap, but an industry standard Flanders Scientific monitor will seriously set you back, and you'll want it to last years. A Flanders that’s comparable to Apple’s Pro Display XDR would cost $35,000 and would be 4K instead of 6K.

A side note here that I prefer a true 16x9 4K reference monitor so there’s no upscaling from a 4K signal. Still, 6K is impressive and will be amazing for photographers.

Two years ago, I reviewed Atomos’ Sumo monitor/recorder, a wonderful piece of kit that gave me hope for the future of HDR. It had a 10-bit FRC, 1,200 nit display and all the bells and whistles you could need on set: focus peaking, waveforms, the lot. The display-only version costs about $1,300 right now.

However, it’s not true 10-bit. It’s 8+2-bit. Here’s a brief explanation of that. While some might not notice the difference, Atomos certainly have. That’s why they’ve released all new 10-bit HDR monitors that directly compete with their Sumo, the Atomos NEON.

If we were to pick the new Atomos NEON monitor that matched Apple’s Pro Display the best, it would be the 31” model. This monitor comes in at $7,999. Granted, Atomos packs this monitor with way more I/O, a 4K 10-bit recorder, waveforms, LUTS, and even an accompanying app. But I hope you still see what the asking price for a good HDR monitor is. 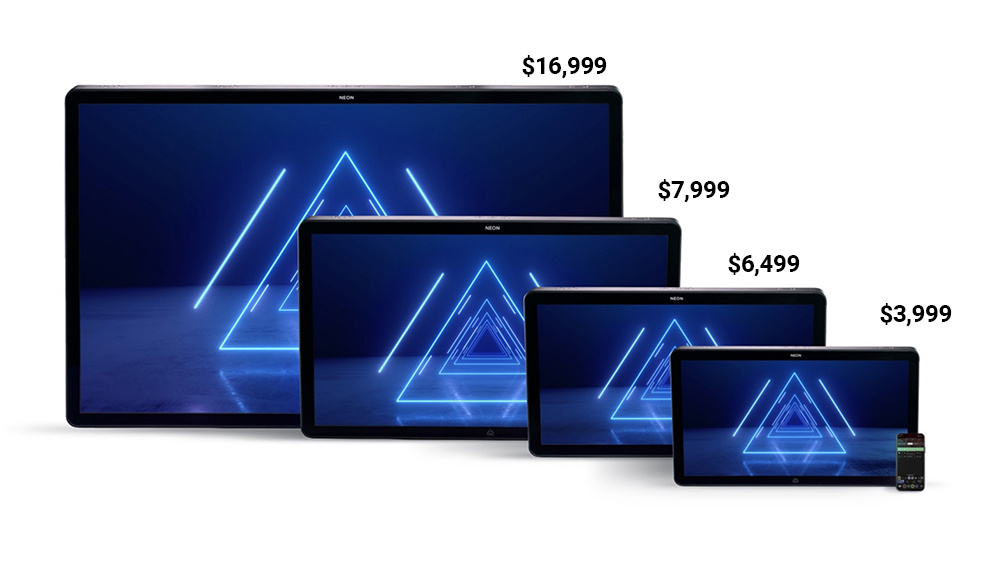 Atomos' new NEON line up is a competitor with Apple's Pro Display XDR, although they are so much more than just a display.

Now I don’t think that Apple’s Pro Display really matches exactly to a Flanders or Sony reference monitor. You don’t get built-in scopes, LUT control, or any features that might help on set. They also say that the Pro Display “produces an industry-leading 1,000 nits,” which is and isn’t true. That 1,000-nit $35k Flanders monitor I mentioned earlier has a $45k bigger brother, which peaks at 3,000 nits.

I’m being extremely nit-picky here though, because that Flanders monitor can only display the 3,000 nit image at a 20% scale. So, you’re only getting a small fraction of usable screen. This won’t happen with Apple’s monitor.

What also won’t happen with the Pro Display is full performance when it’s warm. Apple is claiming that it’ll sustain at 1,000 nits and have a peak of 1600 nits. That brighter ability won’t kick in if the monitor is over 25 °C. Interesting that they’d dish out a temperature in Celsius on their US website. That’s 77 °F, so comfortably above room temperature. This isn’t a particularly jarring issue, I feel, but I’ll bet people will complain about it and compare it to the MacBook Pro’s i9 chip overheating. 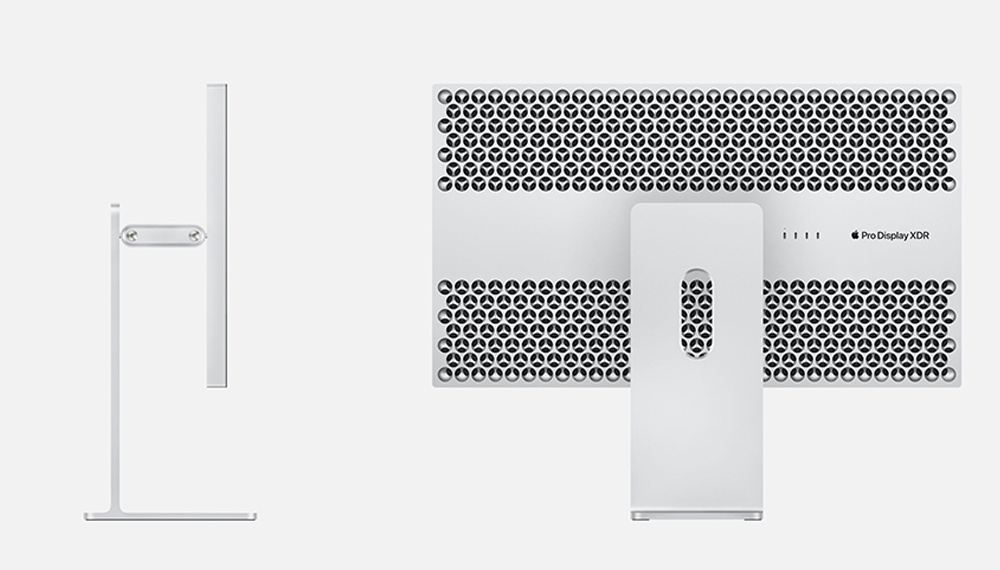 The lack of HDMI or SDI sets the Pro Display aside from other reference monitors, and it irks me. This is designed to be plugged into a Mac computer.

Apple makes a bold point here. They think that if everybody buys these monitors and they overtake the existing industry standard, then the industry will be better off. They’re totally right, in the sense that a colorist or retoucher knows that they’re looking at the same monitor that was used on set.

If industry juggernauts start advertising their tools with the Pro Display, then there’s even more reason to buy it. I’m talking about color calibration tools like Spyder, waveform display apps like Scopebox, and editing apps from Davinci Resolve and Lightroom (who have both already been mentioned in Apple’s keynote).

Also, I know it’s petty, but most of us like when a client recognizes and appreciates our tools, from a particular lens to a type of light. Does a client always know the difference between a softbox and a parabolic? No, but they might know the difference in quality. I’m sure we’ll be seeing these displays in high-end studios soon, and I’m sure that some of the appeal will be the client seeing a brand they know and trust.

Pros have called on Apple to provide updated gear for years, and it’s finally happened. I’m going to brush off the comments that they’ve missed the mark here. Although, I just can’t get behind a $1,000 monitor stand.

What do you think? Will you be saving up or renting one for a few days? Or do the likes of Atomos, Flanders Scientific, and Sony seem more reputable to you?

I fail to see how this is worthwhile for stills photographers. Happy with my 4K 32" NEC PA322. Which, incidentally, I got as a refurb for $568.

My Photos come in at 7000 plus pixels. It would be nice to get a monitor that's closer to 1:1 than what I have now. Helps in photoshop.

How does this help in photoshop? I use 1:1 only when examining for focus, sharpness, and artifacts, and for these purposes having the 1:1 appear larger onscreen than it would in a print is an advantage. This is why MacPerformanceGuide has long recommended at least 32", rather than 27", for a 4K display for stills. On a 32" 6K display, the pixel pitch would be so small that to see artifacts you'd have to either use a loupe to view the screen or go to at least 2:1.

FWIW, my question was a real one, not rhetorical. I'm curious about how a 6K 32" display would be helpful.

I paid full price for the NEC, but it is worth every penny of it. Now after looking at these things, I don't feel so bad shelling out the $3 grand for the NEC.

I don't see any reason why any retoucher should throw away his Eizo for this. And Apples recent record of reliability, engineering, design and repairability is not really screaming "I'm best 4000 bucks you will ever spend"

It's for those of use saving up for an EIZO. Now instead I can buy this.

are you saving for reference CG318/19? than sure, it is an option .. it looks like great monitor on paper

You're right. If you're a photographer with a decent ColorEdge monitor, then there are limited reasons for upgrading. However, if you're a professional color grader working on HDR-content - or considering that workflow, then you should consider upgrading to a monitor that supports 1000 nits or more - whether it is the Pro Display XDR or a much more expensive reference monitor from EIZO, Sony, etc.

Take a look at this video: https://www.youtube.com/watch?v=5cLKmxbmjMY

sure I agree .. just speaking from photographer or retoucher point of view ... it is just not screen for most users .. same case for new Mac Pro ... no point buying lower configs for that money (just get PC for half or iMac Pro) and higher configurations are too expensive and are gonna be great for studios, etc ..
Both products seems to be good (at least on paper) and after few years Pro in the name has meaning but they are cutting away quite a lot buyers even from pro category ..

I fully agree with you! I'm also a photographer with limited use for video performance, but I've worked in B2B sales with a lot of specialized hardware, so I can understand the use cases. This new Mac Pro should only be compared with the competing workstations from HP/Lenovo/Dell. The base model Mac Pro is rather shitty, but it got great upgrade potential if money is no issue - like for a lot of enterprises where reducing time is more valuable in the long run.

There are so many other options for this kind of money. I'd go with a giant oled hdr TV, you can also get up to 8k monitors and calibrate them. Besides, what's the point of making content on these if no consumer has a screen to display it?

I create content professionally, including hdr, and we don't anything more than what the customer will have. Even that is only necessary for the very end of the production, can get by with sdr screens for the rest.

I guess that's why the high-end reference monitors are a niche in the business - because a lot of the workflow can be done with ordinary professional monitors. You buy monitors based on your needs and your place in the workflow. Apple could have released the Pro Display XDR as a high-end option alongside with a standalone version of the iMac 5K display for most creatives, but I guess they'll point to the LG 5K monitor in those cases.

price must be joke, yes?

For me the case is interesting. Due to some personal reasons I cannot use plastic things that outgas. I need to use steel or glass. So Apple products are the only one I can use. I am not aware of any other monitor, computer that is made of glass and aluminium. Everything else is plastic. Eizo too.

They ruined the value in the customer's mind when they said the stand is $1000. Now even if the monitor is trully worth 4000+ USD, the customer sees the stand price and thinks, huh, that's like a $200 stand at most. So the monitor's value must also be greatly exaggerated.

Surprise surprise, It's Apple. Of course all of the prices are inflated.

This is a common misperception.
If you compare Apple products to the cheap disposable minimum viable product you find in Best Buy. Yes, it is quite a bit more expensive than an Acer Elantra or whatever.
If you compare to an HP Elitebook, or similar pro laptop with i7 or i9 CPU, thunderbolt and a metal, not plastic chassis. You see the price difference decrease.
Of course the Apple tax is real in that they switched to 100% USB C/TB3 ports. So you must buy adapters for SD cards, USB A, ethernet and so on.

I assume it has VESA so there are plenty better options anyway ..

It actually does not :D but for $200 extra it does