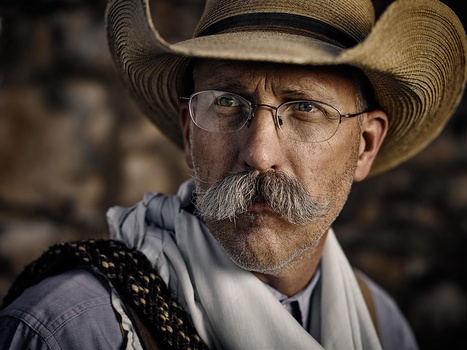 The scene was pretty unique here. It's inside an old 1800's limestone farm house in the Flint Hills of Kansas. The light was horrendous outside so I put him in the shade where the light would wrap around a little bit from the windows. Originally I placed my light on the left so I could short light him (my preferred style), but I just couldn't get rid of the glare on the glasses. Yes, I could photoshop it later, but I didn't want to resort to that. So, I broad lighted him from the right with the Paul C Buff 47" Octabox feathered away from him. A white reflector was camera left, right off the frame, to fill in the shadows a bit.

Love this one Scott!