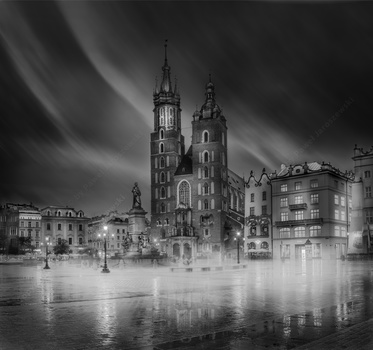 Photograph from the series "Cracow from Dusk to Daybreak"
A series of photographs prepared in the years 2016-2020, for the project of publishing the album under the same title.
The photos were taken in my hometown of Krakow in the south of Poland, the aim of the project was to create an extraordinary vision of this old city.
For many months I tried to show the city in an extraordinary magical light, empty and without people.
And then in 2020, the Covid pandemic came and the city was deserted. Then, on March 15, when the lockdown was announced, I took the last photo of this series.
My friends said that as if I had predicted the world in times of a pandemic - emptiness without people and black and white colors.
My photography series was even called: "Cracow - town during the plague"
More photos here:
https://jaroszewski-fotografia.com/en/projects/cracow-between-dusk-and-l...