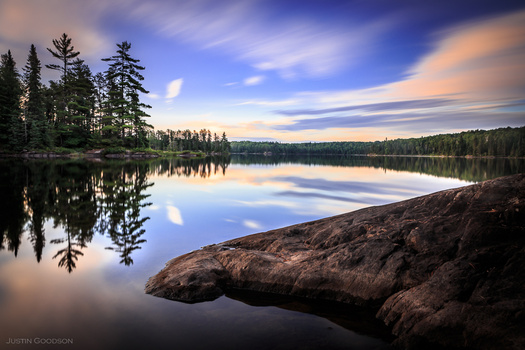 We drove 2000+ miles, canoed across ten lakes, and made eight portages to get to this remote lake just outside Quetico Provincial Park in Atikokan, Ontario. Obviously, the camera came too -- in two plastic bags, inside a watertight box, inside a watertight bag. We camped four days and three nights on this tiny island. My boys claim to have caught 100+ smallmouth bass over four days, although that figure seems to be getting larger over time along with the size of the fish!

I captured this image just after sunrise and right before I went to bed. I'd been up most of the night hoping to photograph the Milky Way, but the skies were overcast. The water, which looks like a black mirror in this photo, is mostly translucent and has an amber glow in direct sunlight.

Not pictured: two million mosquitoes. I edited out every last one.