A reporter and photographer for GlobalPost.com, Tracey Shelton, earlier this week caught some unbelievable footage of some men of the  Noor Den al-Zenke batallion from Aleppo, Syria being hit by a tank's shell. She released a quick series of screenshots from the footage as photographs today. The photos are an incredible and quite horrific example of war.

Tracey was only a few meters away from the blast when it occurred. She was shooting with a Canon 7D and a 28mm lens on a tripod running at 30fps. While I have seen video captured of times of war, this has to be one of the most amazing examples of what can be pulled from video footage to quickly reach a global audience.

"As the cloud of smoke engulfed the street we ran back and frantically waited for the others to escape through the dust and debris. But no one came. In that split second, three men were reduced to broken, bleeding masses. After a few minutes of disorientation, a vehicle arrived to transport the bodies. The survivors washed away the blood and flesh in a heartbreaking clean up. New fighters came to take their posts. And the battle continued." -Tracey Shelton 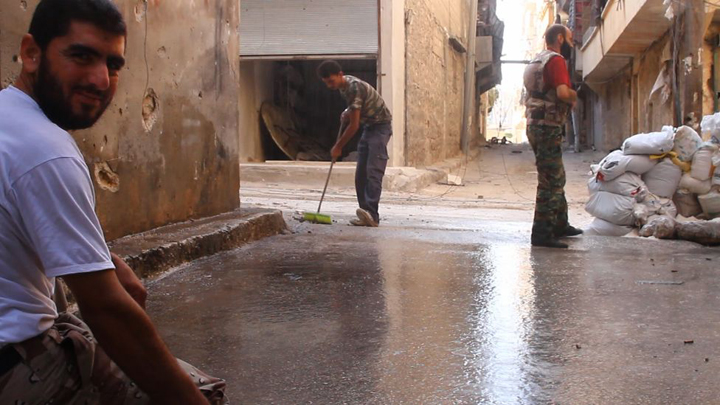 From left to right: Issa Aiash, 30, father of three, his young brother Ahmed, 17, and Sheihk Mamoud, 42, father of a newborn son, laugh and joke as they clean their post Saturday. 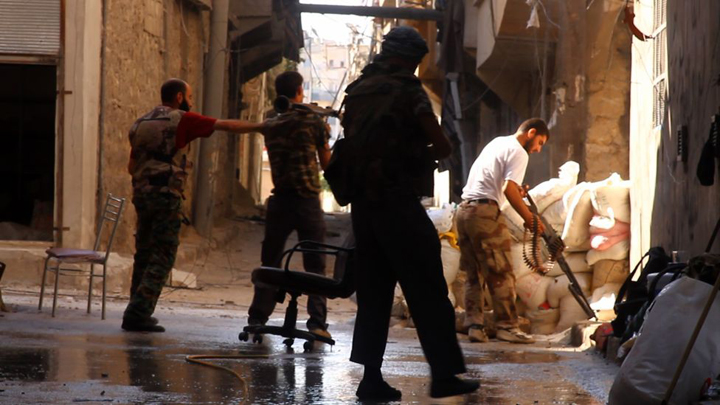 A call comes through that a tank was spotted nearby. The men immediately grab weapons. (Tracey Shelton - GlobalPost) 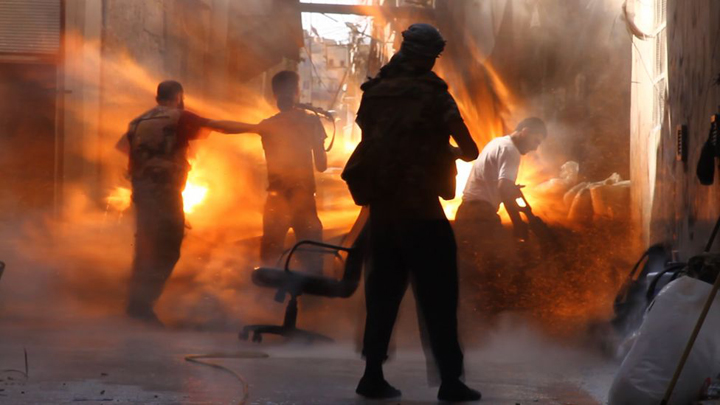 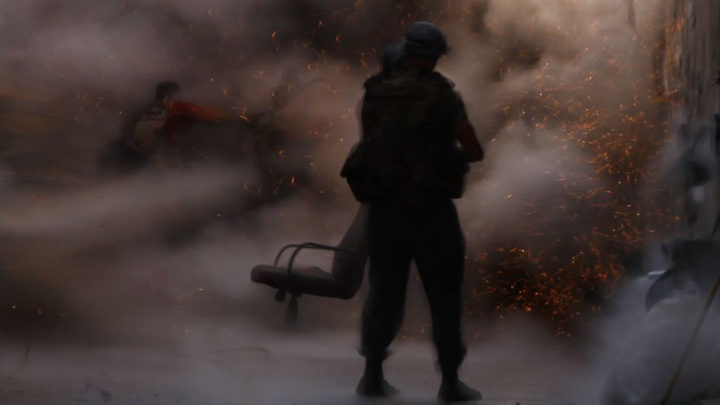 Debris and smoke fill the street around 30 meters back - covering me and the camera in dust. (Tracey Shelton - GlobalPost) 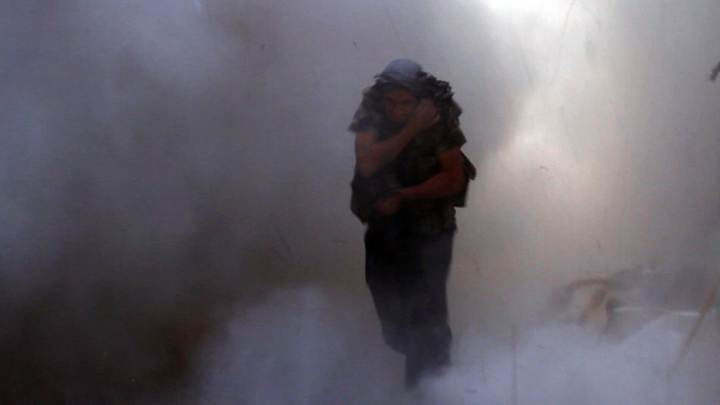 This man was the only survivor. (Tracey Shelton - GlobalPost) 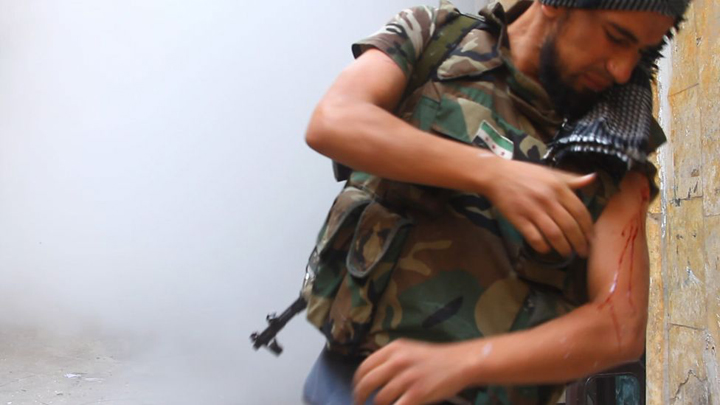 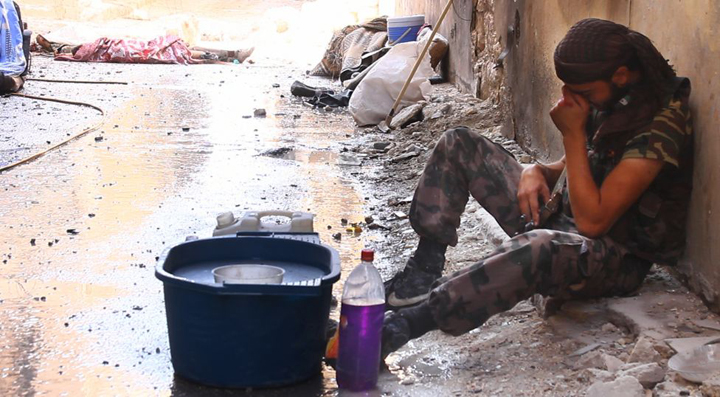 It took several minutes before the dust cleared enough to check for more survivors, but there was nothing we could do.  (Tracey Shelton - GlobalPost)

I have always had a deep respect for war photographers and the courage that they have within themselves to help keep the world informed and educated about what is going outside most of our bubbles. How do you feel about the images?

You can view the entire article Via: GlobalPost

deep respect. death missed her by a few metres.

"A single death is a tragedy; a million deaths is a statistic." ~Stalin

Photographers and reporters in war zones are faced with an immensely difficult task of both covering the horrors of war honestly, and respecting the dead. It seems Tracey has done a service to all of us in reflecting on the violent nature of conflict while memorializing the humanity of those who died, and avoiding veering toward the grotesque. Much respect to her. Rest in peace friends.

Crazy stuff but amazing how he captured the images

what can  you say... very powerful and moving

How can a country fight their own people? This all does not make sense to me at all. I am seriously questioning if the human race should be really considered "intelligent". It is capable to eliminate itself. This is not a sign of Intelligence to me.

Precisely. The Syrian people don't consider them as human being but rather some form of creatures. What they have done to their own people and what they are capable of doing are beyond anyone's imagination. I'm almost certain that the actions seen in videos Youtube have not been witnessed anywhere else by any other regime in the recent history.

How can a people fight its own country? The question makes no sense! There are many species that fight and some few that wage war. Intelligence has nothing to do with it. Its just politics and beliefs that makes it happen. We must let the Syrians have their war and sort their things out without forcing our will upon them. Thats the only way of forging a lasting peace for them.

It is truly diabolical the way and the means that man will go to destroy another man. It only goes to help prove what Jeremiah said at Jerimiah 10:23 - I well know, O Jehovah, that to earthling man his way does not belong. It does not belong to man who is walking even to direct his step.

As Voltaire once said, "Those who can make you believe absurdities can make you commit atrocities." These pictures just cements how horrible man can be to another man all because of a belief.

While we're at quotes:
Ecc 9:11 -I have seen something else under the sun: The race is not to the swift or the battle to the strong, nor does food come to the wise or wealth to the brilliant or favor to the learned; but time and chance happen to them all.

True. Belief and atrocities share a bloody history. But belief in change is the first step to creatiing change.

Seriously? Want Youtube videos of by far more horrendous stuff? Or videos can be photoshopped too?

What is the administration doing about this massacre?

@ Camilo Do you want me to sign you up to fight with the rebels? Let me know.

How terribly sad. Shame on the free world for not helping these brave souls.

@Jumpinjimmyjava why don't you strap an AK-47 and represent the free world in their fight to remove Assad. This is what you get when you are call a rebel. I  am not sorry for any of these guys or so called FSA. They are the number once cause for innocent civilians death. If you want to fight don't hide among the civilian population and fire ak47 or RPG. Get out of the houses and fight. Also we (west) are the cause of this problem. Same problem in Libya with our so called No fly zone to remove Gaddafi. Syria was a stable country with more freedom than Saudi Arabia, Bahrain and reset of our Arabs allies. But we want regime change in a country that is not friendly with us. Why don't we request regime change in Saudi Arabia?And who give us the right to tell others how to live or govern themselves. We (west) is the the bigget bully in the world. I see where kids took it from.  FYI please read about the importance of Syria in the arab world and why the west will want a Sunni puppet regime like Saudi Arabia to isolate Iran.

I'm sorry, but however 'powerful' these images are - they aren't true photographic stills..  they are grabs from recorded video.  They'd be STUNNING if they were true photographs..  but where is the skill in selected some key frames from a video recording??

I think it's the idea that she decided to release the screengrabs as photos right away instead of waiting to release the footage from the film she was shooting. As a news photog the quicker you get content out the better. I have to admit though the grabs look really good for being pulled out of the footage. Who's not to say you can't use a screengrab from video footage as photographs?

The best example of what can be achieved from video (as far as screengrabs are concerned) is our FS Original:
Will Video Cameras Kill Still Photography? Red Epic Vs Hasselblad
http://fstoppers.com/hasselblad-vs-red

It's about the content in this one.  What did you take a picture of lately?  A tree?  BORING

Well she should release the video footage then.  I don't take anything away from the fact she's brave enough to be there documenting it..  but people claiming these are "fantastic photographs" is wrong..  they aren't photographs..  they're video grabs - BIG difference.    I shoot music, not landscape..  I pick my moment..  filming it and picking stills is neither skillful or challenging.

Again I say, still photos are for art, weddings and pin-ups.  You can not only pick your moment, you can stage it.  You can't stage live action, you must anticipate, lead, and still hope you're safe and very lucky.

This is the evolution of the tech in photography. Would you discount any photo taken with a digital high speed camera because it was to easy to hold down the shutter and machine gun off a dozen shots a second and say, That's not how real photos are taken? Maybe I know people who do. But like it or hate it that's what the technology allows these days.

But if you notice, the pictures are progressing in what looks like split seconds.
In the second, third, and fourth photographs, the four men in the
picture have barely even moved! I don't think it would be nearly as captivating
if the journalist just posted a 2-second video.
And if the cinematographer captured a great video and posted stills of that video depicting how great it was, it wouldn't be fair at all to say
"they got lucky they shot a good video. all they had to do was press one
button and just stand there." filmography is a newer (although very
different) form of photography, and it is an art in its own way.

You know when your in the field especially in a war zone you gotta think how to record everything that is happening even if it means taking a video... and Because your doing a DOCUMENTARY...

its not all about skills, it's just pure instinct of what you need to do to make your job right.

Photojournalists use every tool available to provide an image and tell a story.  Even before film and video, you never saw everything that was "snapped" because the photog didn't release the bad shots.  Fact is, it's much more difficult to maintain composition when the subject is moving and you've got to stay with it.  Selecting dramatic frames just provides faster access to the media (less bandwidth).  In the cyberworld, video is for covering action with the added benefit of an audio source.  Still photos are for art, weddings and pin-ups.  .

My point is that she's describing them as photographs, and everyone is praising the skill and timing for getting these images..  ANYONE can record footage and pull 'decisive' frames - but you aren't going to win a pulitzer doing it..  it's not like hitting the shutter at the exact moment.  Right time and place, but no better than any Sky, BBC, NBC, CNN news broadcaster could get.