Superheroes Beautifully Photographed Far Away From Any Action

When we think of Superheroes, we tend to imagine them fighting crime and saving innocent people. We always see them in movies and comic books as they fly away from explosions and jump off buildings. Action all the time. French commercial photographer Benoit Lapray decided to show us their other side and photograph them relaxing in nature. Just them, quietly enjoying the view.

In recent years Benoit lived in Haute-Savoie, in the French Alps, where he fell in love with nature and the mountains. He felt like he's recharging and getting new strengths every moment he took the time to relax in the nature, and started imagining how Superheros probably go there to recharge in between fighting crime and saving people. "It's maybe because I realized that to be there, lost in the nature and surrounding by the mountains, gave us a new strength. And of course, superheroes are the people who need the most to stay strong. So between two rescues and fights with bad people I imagine them going there, alone, to find a new strength and be stronger than ever."

With that thought in mind, Benoit decided 4 years ago to start a personal project named "The Quest for the Absolute", and photograph Superheros enjoying nature. He shot the images in places like Haute- Savoie (France), Haute-Alpes (France), Bretagne (France) and Devon (England), and promises to add new locations and Superheros in the future. 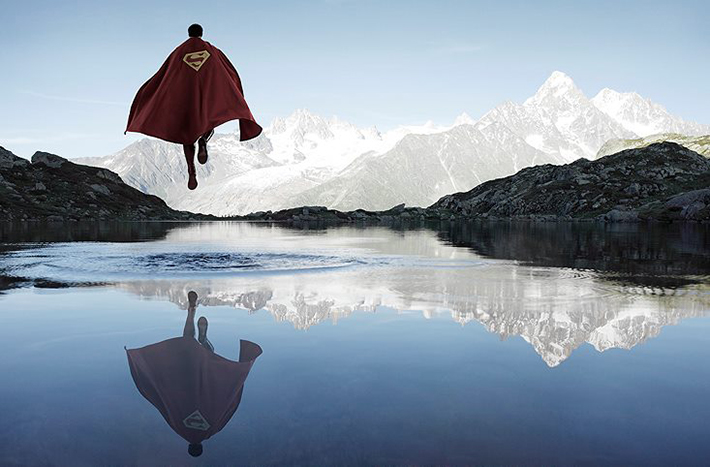 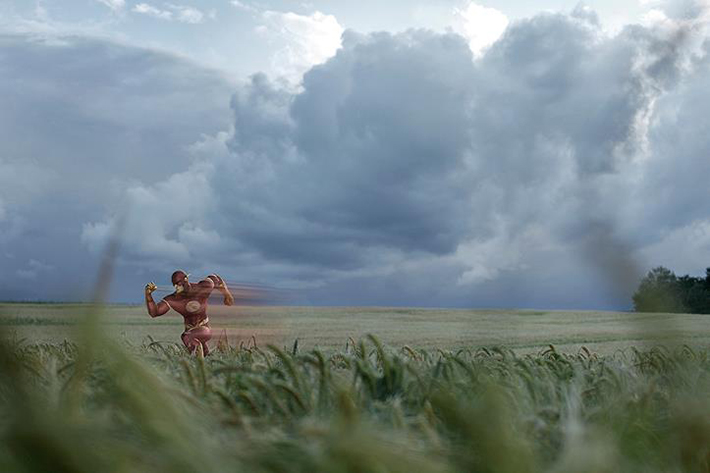 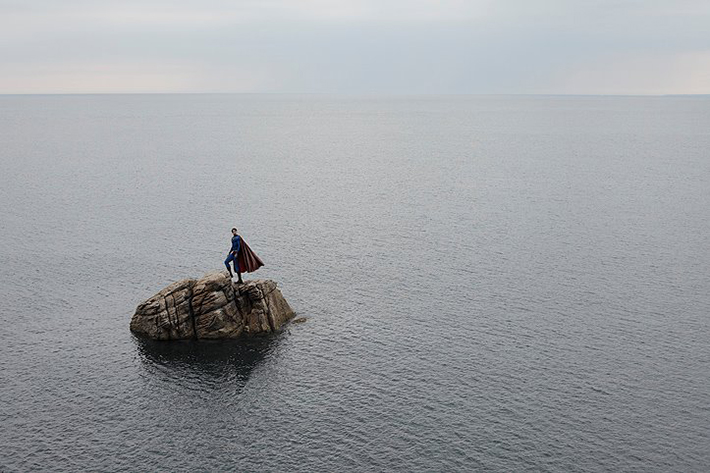 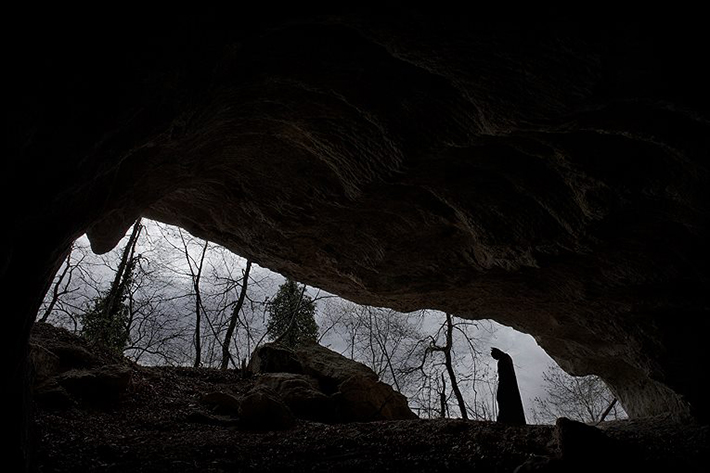 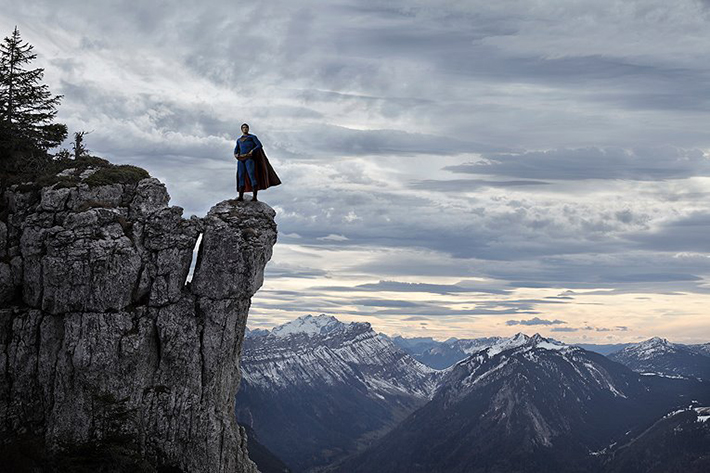 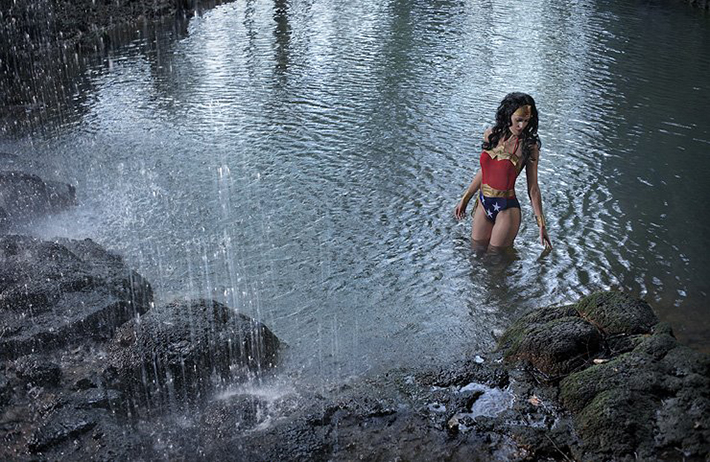 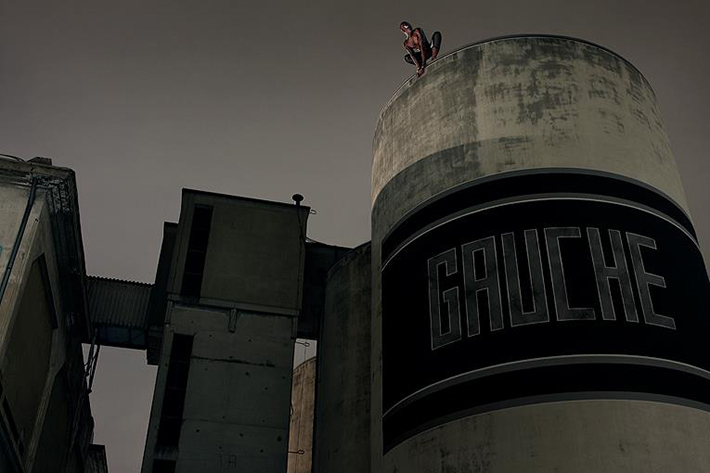 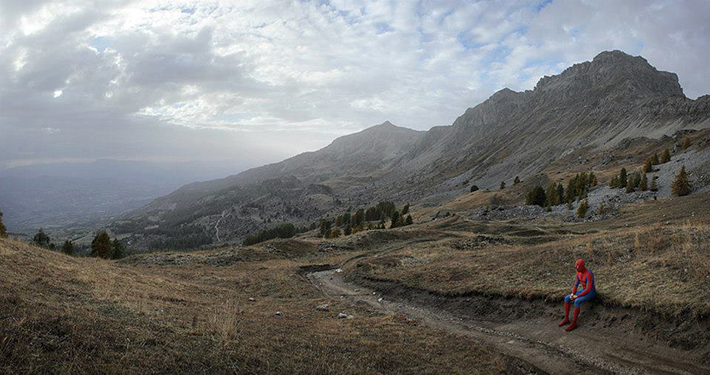 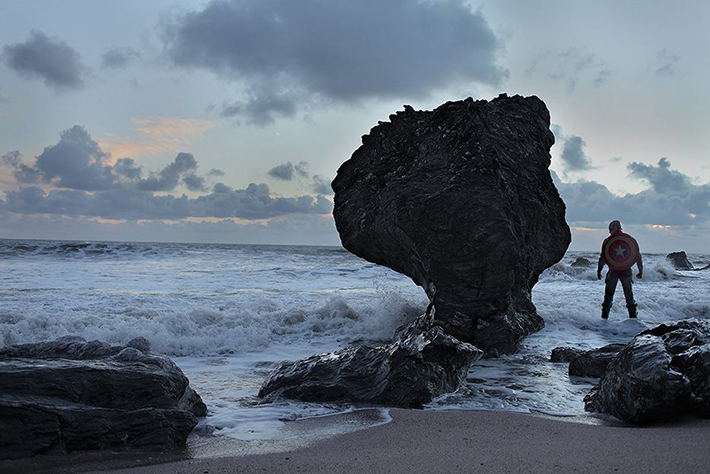 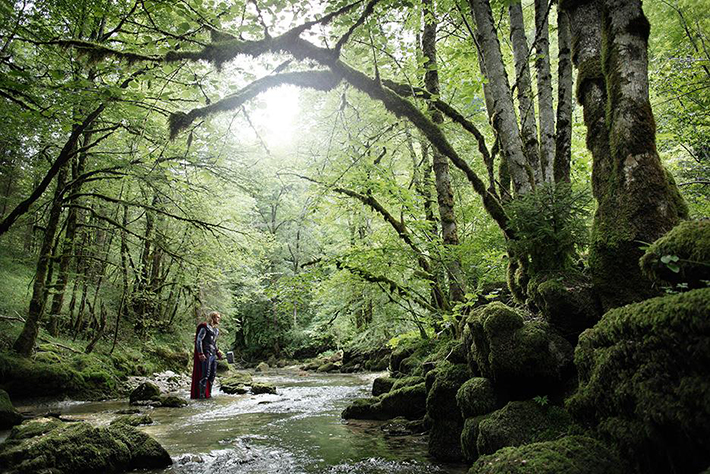 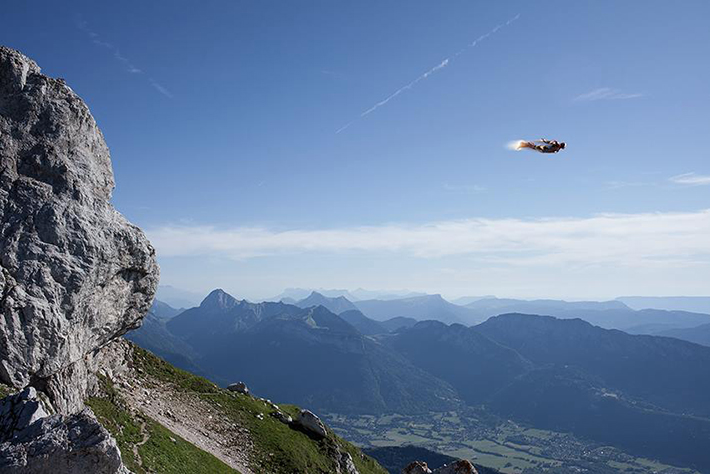 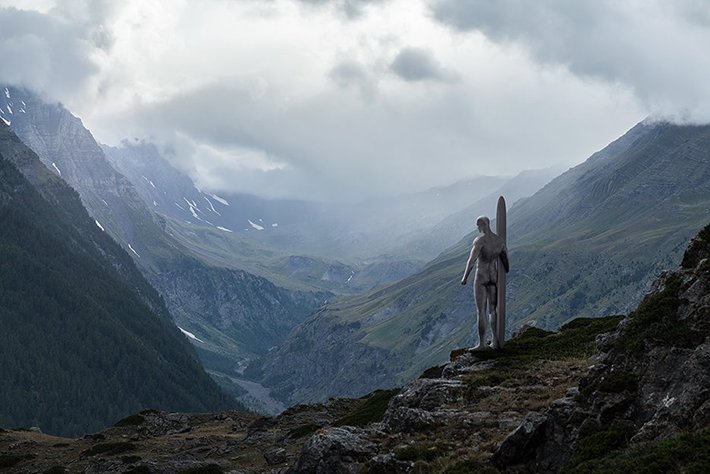 Benoit added on his methods for capturing the heroes: "Sometimes I use shots from the films when I find a picture with an interesting position and light, sometimes a rent costumes and I shoot people with the costumes on at a location (when it is possible) or in a studio (when it is impossible to go on location with the model), and sometimes I buy figurine of the superhero to shoot and add them with Photoshop on my photo landscapes. So I have many ways to proceed for this project, and I don't really care about my process for getting the photograph. My only worry is the result."

For more images from the set, check out this Facebook album.

I love Batman looking down. Even on vacation in the wilderness he is depressed.

The Batman photo is my favorite too.

I do love the series but find it kind of lazy that the only thing done with the only female superchick hero is to have her croutch with her breastplate out in a cavern , over her superboots looking down like she's posing for SI Swimsuit cover. THe only thing missing was her index finger in her mouth. Jeese, what about her napping in her invisible jet? Sitting on a rock contemplating her life and coiling up her golden lasso...Atop a ridge, looking down at an activity that 'normal' women are doing...Doing a yoga headstand under a lonely tree on a prairie.....

Viki, the only thing lazy here is you and your boring, non-inspiring, and sloppy work (see http://www.familyphotographynj.com ). The only things missing are some selective color, awful hdr processing, and posed photos. Nevermind they're all there in your galleries.

As Bob Dylan once said... “Don't criticize what you can't understand.” In this case, it's good photography.

Where's your gallery, Paul Kim? You like to trash other people, let's see your work.

You really should take the time to see his Facebook album that is linked in the article. I think you will find what you were looking for.

Also, if you think about Wonder Woman the "Warrior" Princess. The shot chosen for the article shows her enjoying the water and nature around her. Its the whole point to the series. To place heroes away from their normal surroundings and situations.

At least that is what I got from reading the article.

The result is badass

I like the landscape shots, but the superheroes are just 'shopped in. That's Chris Evans in the two Captain America shots (the shield on back one is from the teaser poster here - http://t3.gstatic.com/images?q=tbn:ANd9GcRe8dsUEZvlWO9NnpF3Z7zue-O81HCWy...), and Brandon Routh (Superman Returns) in the shot of Superman standing atop the rocks. That's definitely Chris Hemsworth as Thor...I mean, the only ones he may have actually had models for are the Wonder Woman pic and the one of Spidey sitting on the path as that looks like a commercially available costume. Silver Surfer's a grab from the FF: Rise of the Silver Surfer (he poses just like that overlooking a valley), The Flash looks to be sourced from either a video game or comic, and Batman, well, there's a dozen Batman silhouette PNGs that look just like that. I don't get it. Like I said; nice landscape shots for sure, but the superhero bits are what's selling this article, and any of us could go grab these same images/stills and stick them on a landscape shot.

Yes, especially because the article clearly states that he "photographed the superheroes in nature", when he clearly just pasted them in. The compositing is solid, but, like you said, this isn't his own creation, and hardly worthy of an article on F-Stoppers.

You really need to re read the last paragraph James. Here's the quote...

“Sometimes I use shots from the films when I find a picture with an interesting position and light, sometimes a rent costumes and I shoot people with the costumes on at a location (when it is possible) or in a studio (when it is impossible to go on location with the model), and sometimes I buy figurine of the superhero to shoot and add them with Photoshop on my photo landscapes. So I have many ways to proceed for this project, and I don’t really care about my process for getting the photograph. My only worry is the result.”

I found two of the source pics in case anyone has doubts. I'm attaching them here.

how fast is your shutter speed when you shot the flash??hehe..i bet 1/8000th of a second wouldn't capture him..

why did you post this? Just landscapes with heroes shopped in. There are a lot of great picture series around web, this one really don't deserve attention. I'm a fstoppers lover, but cmon guys, what's interesting in here? :(

WHoa-jesus H. WHy is it impossible to raise ANYthing without getting flamed? As a girl, I would've liked to have seen something done with Wonder Woman than looking like she was forced to pose sexy at gunpoint.

Why does that become a cause to rip my work to shreds-when it isn't lazy and uninspired. For the record, I mess around a little with some funky HDR occasionally but i'm not an HDR junkie. But there are an awful lot of photographers published and lauded who do so what of it if I were into HDR? Maybe when I was making my very simple and honest comment-instead of 'lazy' I should've used the word 'obvious'. It's like Joel Schumacher focusing on the muscle and groin definition in George Clooney's batman costume THat's ALL I said. Does Wonder Woman really have to squat in a cavern or can't she be doing something in line withe other superheros?
I don't get the reason for the totally vicious jump-down on my head and my work. You were so hardassed to frag me that you jumped over the fact that I said I loved the series-the Wonder Woman shot was out of place in the array of thoughtful contemplative male Superhero shots. I don't think I'm failing to understand a visceral response to what is meant to incite feeling. I'd take a look at your page but there are so many Paul Kims I can't figure out which shooter you are. It's just so unfortunate that one of the very few times I post something , with a pretty honest observation that you say absolute crap about me and treat me like a terrorist at the dinner table.

The personal attack was unwarranted and a jerk move, IMO, but when you criticize in a public arena, you open yourself up for a retort. That said, my observation: The male heroes look masculine. Wonder Woman looks feminine. I can't speak for anyone else, but I'm not seeing the cheesecake/pin-up you're seeing in her pose. I have a strong distaste for the rampant sexism in comic book and fantasy art, but I'm also irked by the notion that 'powerful' and 'feminine' are conflicting qualities. My two cents.

I'm not seeing the cheesecake pin up thing either. To me it looks beautiful and contemplative.

Hey Adam. I definitely see the beauty in the lighting and composition, and the other shots are totally contemplative defined. But the W.Woman looks like she's squatting before spontaneous birth or posing for Playboy's superhero issue. It's a little raunchy looking. Totally matter of first impression I'm sure but when i think of women contemplating i think laying in the grass, sitting lotus position at the beach, staring out of a window from their workspace...a dozen other things. I've never stopped to think by squatting and sticking the butt and chestal area out. There were such great ideas put into the male hero shots. Even floating in the grotto relaxing and looking up at the sky would've made perfect sense. A squatting strapless woman doesn't sell contemplation but i do not need world war three over a simple observation over first impression. I respect different takes and it would be nice not to open my inbox and wince for fear of flying ammo aimed at my head. Again. I really did love the whole series. As a chick, a woman, a freak with boobs, I just found the sole female character's concept a little shallow. Not badly done, just not seeing it as contemplative as the male heroes clearly perfectly are. That's all. Peace out. Band meeting. Present.

Would be better if you didnt just take screen shots from movies Etc..

Some look really cool, some look pretty clearly shopped. The only one I dont like at all is Spidey in the countryside. Peter Parker could always go for a hike as himself in a place like that if he wanted, if he wanted to chill in the Spiderman costume I imagine a location more suited to wall-crawling and web-slinging where he would actually want to keep his identity secret still

You all should read the article. Especially the last paragraph.