The phrase “go big or go home” seems to take on a special significance with photographer Dennis Manarchy. Obsessed with the concept of scale and the possibilities of working with massive negatives to create portrait images more than two stories high, he and his team have created a 35-foot view camera, the world’s largest film camera. The project, nicknamed “Butterflies and Buffalo”, aims to use the traveling view camera as a conduit for documenting more than 50 of the unique cultures in America.

Inspiration for the project grew out of Manarchy’s days as a student of art and photography at the Rochester Institute of Technology. Impressed with the way that artist Chuck Close employed scale to render detail in his photorealistic portrait work, Dennis felt that large portraits made a powerful statement. After seeing Close’s exhibition at the Museum of Modern Art, he wanted to create honest people photographs that could similarly display the authenticity of an individual in a gritty, realistic way. He was also moved by the work of Edward Curtis, a portrait photographer who chronicled America’s indigenous cultures in the 20-volume North American Indian publications.

After graduating from RIT and apprenticing under the legendary Irving Penn, Dennis was drafted into the army and served as a Lieutenant in Vietnam. He eventually established a successful commercial studio in Chicago with a client list including Harley Davidson, Nike and publication credits in Life, Vanity Fair, Vogue and Time. The power of the portrait, the initial draw that he felt when seeing Close’s imagery at MOMA, is the common thread through Manarchy’s long and storied career behind the camera.

With the gradual displacement of film technologies by computers and digital cameras and the rate at which unique cultures and small communities are being absorbed and native languages lost, Manarchy felt a sense of urgency. He hit upon a documentary portrait project unlike any other, one that necessitated the creation of an entirely new breed of camera.

“I decided that my next project would be documenting American cultures and doing it in the most incredible way that I can think of… and so, I think just the way I think, I said ‘how big could I make something?’” says Manarchy in the video that appears on Butterflies & Buffalo web site. “I tried blowing some pictures up that I had taken but they really didn’t do it very well so I said ‘I need a bigger camera’ so I figured well, this is the time I have to roll up my sleeves, dig in, get the welder out and start rocking on a new camera.” 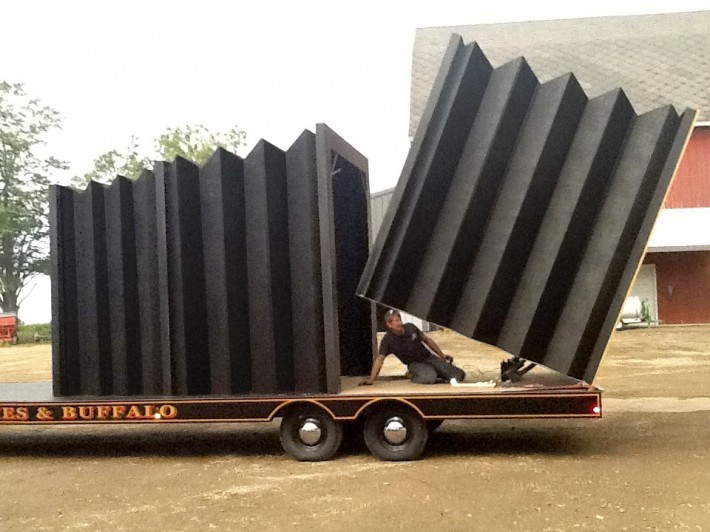 Steel Bellows on the Camera's Trailer

Three prototypes were created in an experimental research and design phase that ultimately led to the enormous, really large format camera that Manarchy will take on a flatbed trailer around the country. The film used to make the massive photographs is shipped in from an overseas supplier and cut down into six-foot sections. The resulting enlargements are 24-feet in height with unparalleled detail.

“The prototypes required a basement-collection of materials — cardboard, switchboards from Home Depot, a vacuum cleaner to provide a suction plate that held the film intact, whatever Dennis could get his hands on,” said Chad Tepley, director of Butterflies & Buffalo. “And now with the debut of the final camera, it is a true commemoration of nearly 200 years of photography. It's stunning — 35'x12' high x 8' wide… the lens is 240 pounds, crafted out of blocks of aluminum and comprised of over 100 individual parts. The camera has over 3,000 nuts/bolts/washers that hold together the massive steel bellows framed in African mahogany.  The 80-inch plasma screen provides a live-feed to the photo sessions in progress so that the communities can witness everything in action and engage with the camera.” 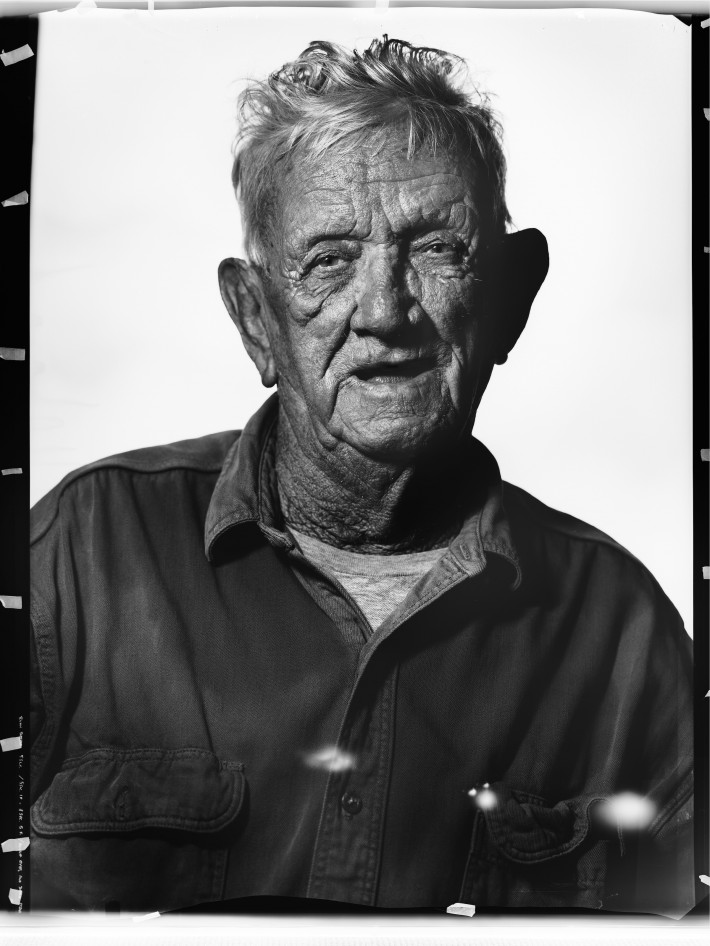 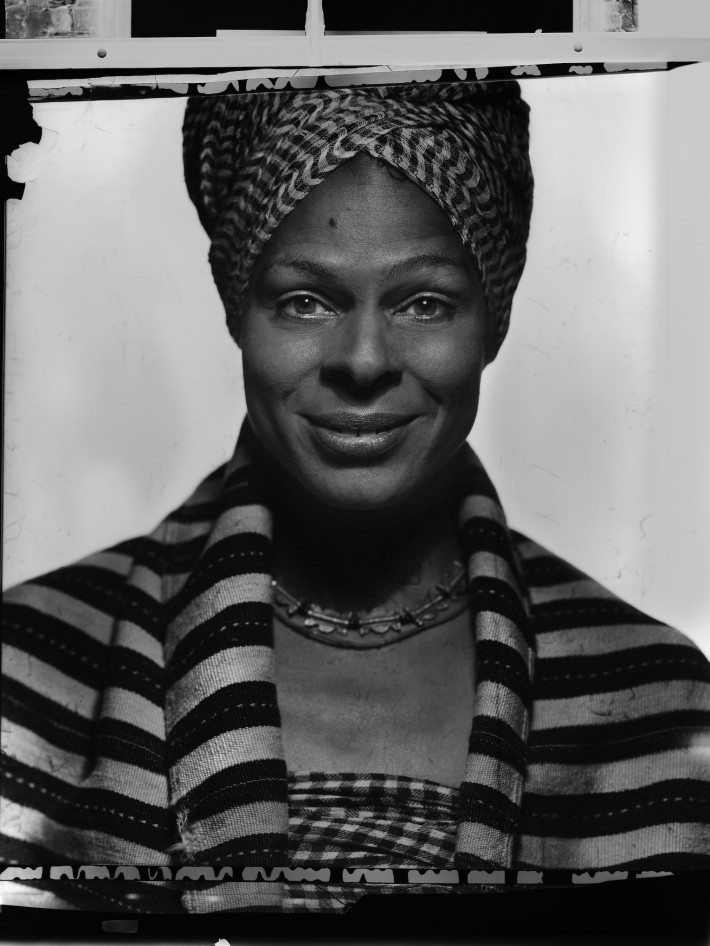 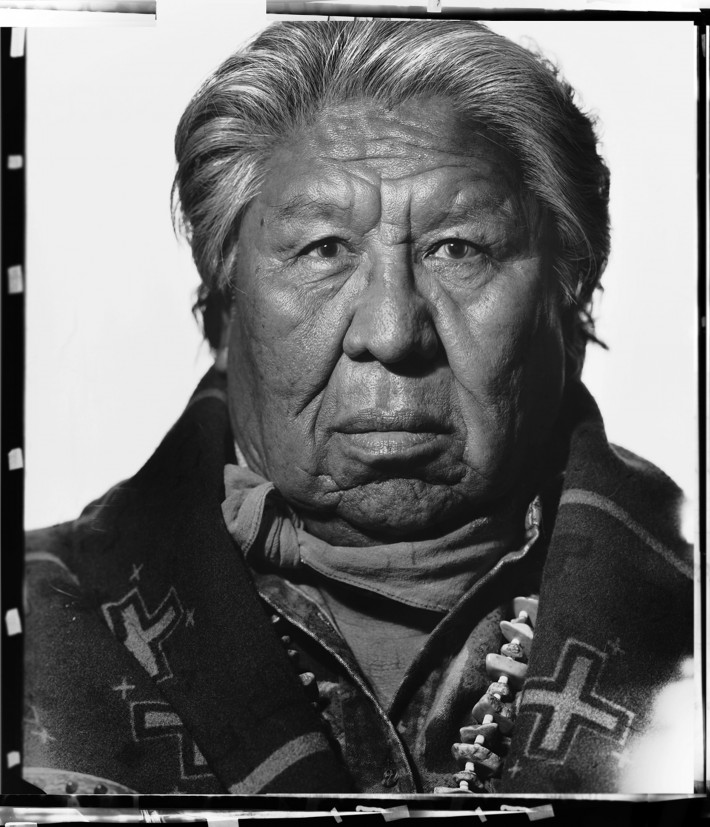 The final assembly was completed last week and will be on display along with a set of massive portraits beginning September 18 at Two North Riverside Plaza in Chicago. The showcase in the heart of the windy city’s historic downtown is the unveiling of the camera and it will soon be on the road on a 20,000-mile nationwide journey documenting the unique and varied people and cultures of the “melting pot.” The concept is thus an ethnographic and visual study, a documentary aimed at preserving history.

“Some cultures are understandably very sensitive to how they are portrayed, and it is our job to allow these people to tell their own stories,” said Tepley.  “It's our hope that this project will raise awareness of the rich heritage across our lands.”

Tepley and Manarchy intend for today’s debut to lead to the creation of lasting interactive, multi-sensory gallery and exhibition, a way of celebrating the American diaspora as well as the invention of the camera. As the team prepares to take to the road when the Plaza exhibition concludes at the end of October, they are continuing to raise money and find sponsors. Just today, to coincide with the exhibition, they launched an IndieGoGo campaign to raise awareness and funding.

You can view at TEDx talk by Dennis Manarchy, visit his portfolio online or a gallery of portraits made with the prototype camera.

"My, your camera is quite large, it must take really nice pictures!"

I would love to see these pictures in their actual size! :)

i see the pictures from my office building, didnt know the thing under the tarp is a giant camera

Outstanding. If the exhibit comes to any museums in Washington DC, I would love to see it.

My big question is what is the focal length of the lens, and what aperture was needed? If imagine this has insanely long exposure time due to the necessary f/stop to get the depth of field needed in the sample images. By my quick calculations, assuming a normal lens at an equivalent aperture to get depth of field similar to f/8 on 35mm, we're looking at an over 4000mm lens at around f/800 to make these images.

Guesswork as to what the actual lens is, but a "standard" lens for a 4.5ft x 6ft neg would be a little over 2000mm in focal length (ie, the diagonal of the negative). Looking at the lens, I'm guessing the max aperture is about 20cm in diameter which would be about f/11 wide open.

F/11 on a 2000mm lens is equivalent to shooting a 50mm f/0.27 on full frame. That's FOUR stops faster than an f/1.0 lens. The depth of field would be microscopic with this framing at 2000mm f/11. The working aperture has to be much, much smaller to get the depth of field seen in these images.

f stop is simply focal length divided by aperture size, but yes, I agree that f/11 would have a very shallow Dof.

Since posting I have seen photos of the actual lens. It is an Apo-Ronar 1070mm f/14. This will be a pretty wide angle optic, equivalent to around 20mm on a 35mm film (or full frame DSLR) camera. It's not clear from the photo what the smallest aperture is, but to get any depth of field, the "monster" would need to be stopped down to f/90 or smaller

Wow! These photos are great! Talk about thinking outside the box. I am inspired.