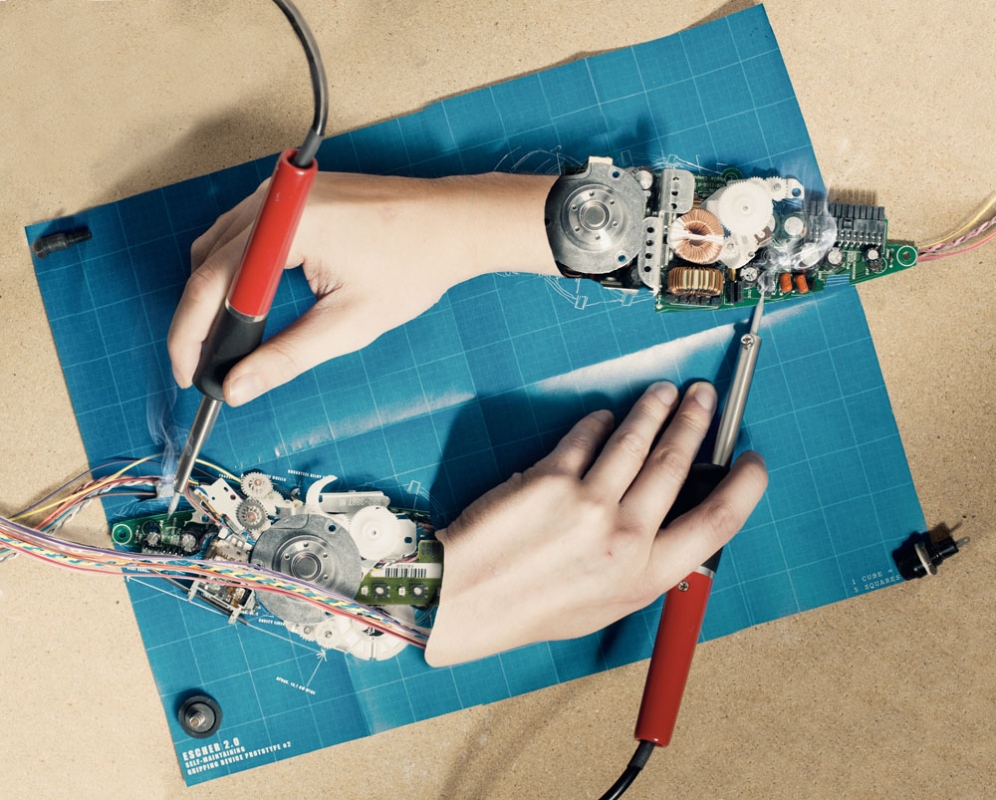 This is a homage I created a while back after being inspired by my two favorite artists, M.C Escher and Dan Winters. The concept is that instead of hands that draw themselves we have machines that builds themselves, going from blueprint to assorted parts to something far more advanced.

The photo was lit with a single beautydish camera right. Process was pretty simple. I started out by doing a detailed blueprint thing and some loose scetching of the hands just to have some sense of where everything would go. Originally i had planned to have the blueprint being a larger part of the final image, but I ended up covering it with junk instead.

With the blueprint printed and the light set I started to take some pictures of my hands in various poses, which proved to be rather uncomfortable and I probably look pretty stupid while doing this.

With the hands done I began to build the interior of the hands by combining different junk on the blueprint. This was important in order to get the shadows right, and saving me tonnes of time in post. I also shoot some parts on a white background to be able to extract them later in post.

In photoshop I masked the hands and started to add bits and pieces of wire and other things. Next thing was to add some shadows to everything. Then after spending a lot of hours on this I realised that I had tilted the blueprint the wrong way! The original is rotated the other way. That had to be fixed, and this was actually a really hard part because of the grain in the wood, fairly tight crop and falloff from the light.

The rest was pretty basic dodging and burning, some time spent with curves and selective color.

Thank you very much Noam. :)

Hi Rebecca, I just wrote a description and a small tutorial for the photo. :)

I liked the way you managed the concept very much!