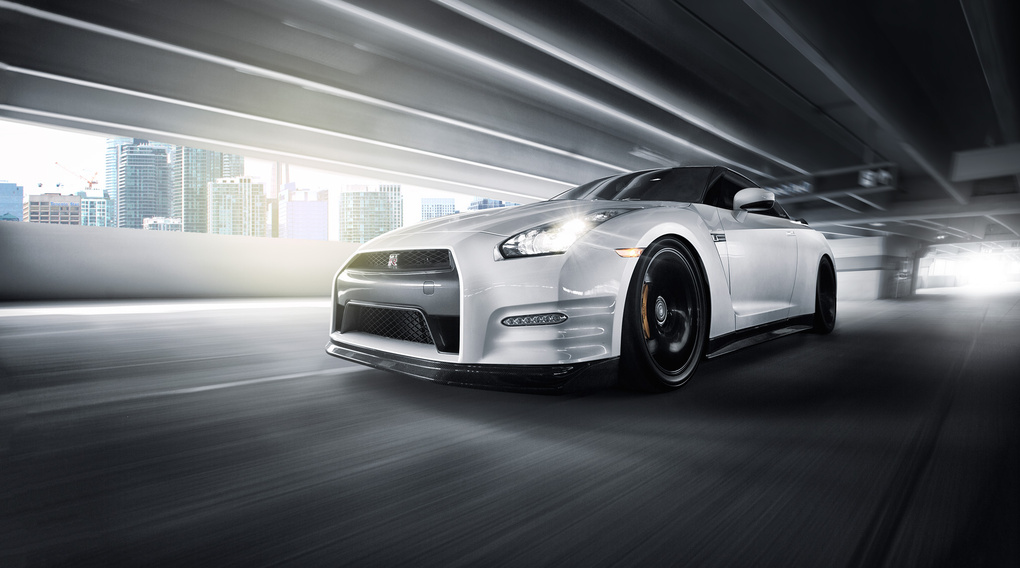 I started out photographing cars just over a year ago, mainly as a fun personal project. I'd fallen in love with the concept of rig shots - who doesn't love the idea of a gigantic selfie stick strapped to a car then moving the car a few feet. When the opportunity to photograph this gorgeous GTR came along (just before it was stripped down to become a showpiece of add-ons) I couldn't resist!

We setup in a parking garage, the sun was backlighting the car so my first grab was of the car static, with some reflective light thrown onto the side. Then we shot the rolling shot, 20second exposure over 4ft movement. This was a fairly tricky task as there was a lot of ground variance and I had to walk the camera, acting as an organic gimbal of sorts!

Back in the office the building of the image begins. The city was added in post, the bland sky wasn't helping the mood of the image, the background lightened to focus the viewer on the car. Surprisingly enough the rig shot actually came out cleaner than the static shot (note to all rig shooters - get into the habit of putting a tripod under your camera while shooting statics!) and provided more than enough detail for the end shot.

Superb! Loved the processing, coloring, and all the light effects!

Superb work sir, helps that this is my favorite car.

Great photo dude, your post processing is on point! Love these kind of car rig shots!

This is great...one of the best rig shots Ive seen for a while

Wooow I would love to get started with car photography. Don't know how.
But wow, that's just wow! ;)

Thanks Matthias! I honestly do car photography right now for fun, its a blast to do! So far the tips I can tell you are this: Shapes, colour and emotions rule over everything else. 90% of car shots are lit from above, the car is always the most colourful part of the shot and emotion trumps all :) Have fun in getting started!

Thank you Ash for the useful hints. But I getting started I literally mean getting started :D Where do you find all those awesome cars in the beginning? I live in Poland. Nobody owns fancy cars here :D Need to move to the US :D