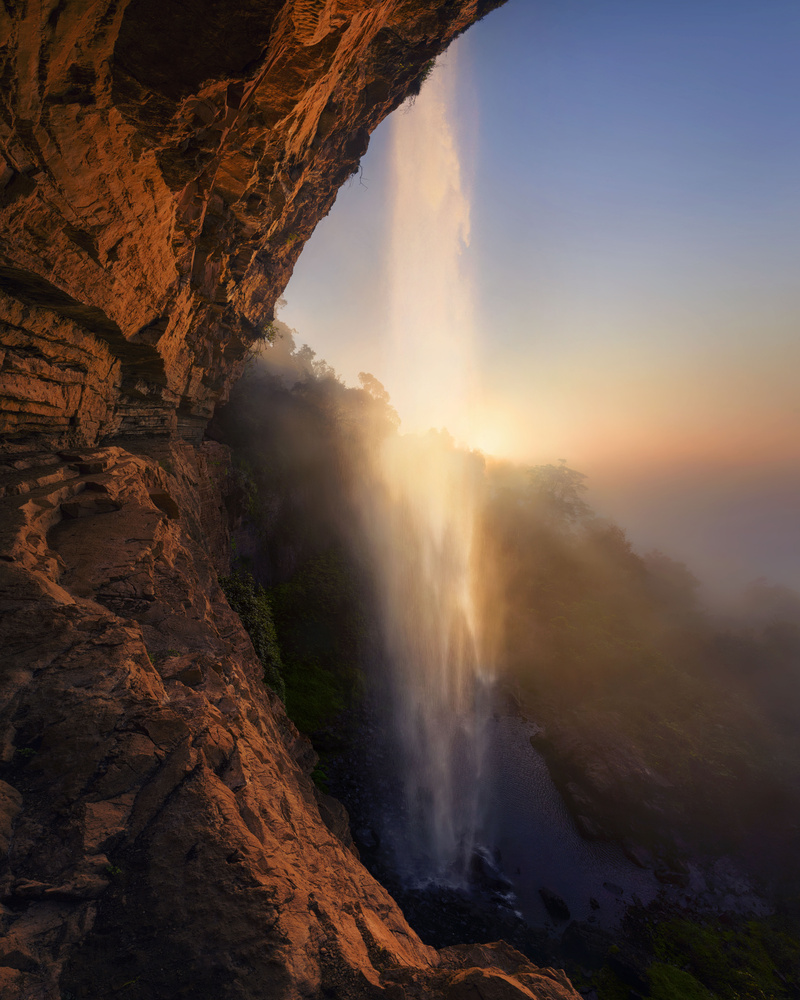 This is one of those images for me that I really want to like, but always feel as if it does't quite capture the spirit of the moment. It's really quite difficult to describe how amazing this easter morning really was. The shot was taken almost exactly one year ago, but I still remember every detail of that morning. This waterfall itself is farely well known, but not a lot of people seem to know about the vantage point about half way up the cliff. As I hiked up to the falls and scrambeled up the rock towards my viewpoint, all well before sunrise, my hopes were limited by a thick layer of fog that had rolled in over night. As luck would have it though, the fog turned out to be a dense layer that magically ended right below where this image was taken. I set up my tripod, still unsure how best to caputre the scene, overwhelmed by the epicness in all directions (even though I had scouted the location beforehand). Above me, I could see the water pouring down the cliff edge, below, the water landed in a misty valley with beams of sunlight breaking through. On my left the red cliffs glowed in the sunlight, while to my right, the view was open above a perfectly smooth layer of fog under a pink and orange morning sky. It was too much. I felt like, no matter what I did, I could never get all the beauty of the scene into my image. I decided on a vertical panorama to include the entire waterfall, and yet the scene was so much bigger.
After editing the image a bunch of times, a year later, I finally have an image that I somewhat like. Perhaps I'm a bit harsh on the image because I know that there was so much potential, or maybe I like it more because I associate a memory with it. Help me out here and rate this for me!

Spectacular view! Thanks for sharing it. I hope you continue to go to the same spot now and again as the sun comes up on either side of the waterfall, it would make for a great series.

Many thanks for your comment Doug! That sounds like great idea, but unfortunately I won’t be able to make it back to South Africa for a while. Next time I do though I’ll definitely get back to this spot!