Ah the ProDot, tied for the win as recipient of the most baffled and confused responses from photographers along side Tiffen’s confusingly expensive flashlight. Many of you laughed aloud when you saw this product hit the market, and even more after you watched the launch video. But is it possible that you might actually like the ProDot? Actually, yes.

There isn’t really much of a need to explain what the ProDot is, since it sort of explains itself, but I’ll give it a shot. The ProDot is a tiny red dot covered in ergonomic nubs that attaches to your DSLR shutter button. The sticky isn’t permanent and is reusable, though as expected if you remove the sticky from its first home, you’ll find it was never quite as sticky as it once was. The ProDot is designed to reduce fatigue and make firing your shutter easier and more accurate. Right about now is when the laughter and bewildered looks started to roll in when the product was first explained. But are you ready to be bewildered a bit more? Good, because it actually sort of works. Sort of.

I was ready to hate the ProDot. There are few photographers out there who have the kind of deep-seated hatred for unnecessary accouterments dangling off and cluttering up anything I own than me, especially when it comes to my camera. The idea of putting sticky residue on the shutter button of my camera made me nearly physically ill (this coming from the guy who needs to wash his hands a couple times an hour to keep his sanity). But, like a trooper, I bit the bullet and stuck that ProDot on there. Weeks later, the amazing occurred to me:

The ProDot is still on my camera.

I have had ample opportunity to take it off. I keep telling myself I don’t need it, that it isn’t doing anything and that it’s kind of ugly (being red and all) and yet, in what seems to be an inexplicable manner, I continue to shoot with the ProDot on my shutter. And then I realized: the ProDot actually is doing something. 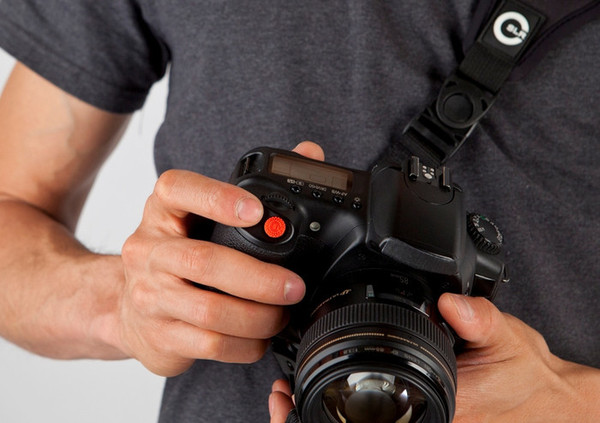 So let’s answer some basic questions stemming from the claims about the product:

Does it reduce fatigue? No. I have no idea what shutter fatigue is. I’ve never had it. Even after shooting sports for hours, I’ve never experienced fatigue. Maybe I'm crazy and owner of super index fingers that never tire, but I'm convinced this was marketing fluff. But if I ever had this so-called fatigue, I'm pretty sure this would not reduce it.

If nothing else, the ProDot does make firing your shutter more comfortable. The little nubs just feel nice. I shot on a camera without the ProDot after using the ProDot on my camera for about a month, and there was a real difference. I found myself, dare I say, missing the ProDot.

What I liked:
It feels good.

What could use improvement:
Price maybe?

I complain about the price because it can seem like a bit of an expense to drop $10 on two tiny pieces of silicon. But you know what? It’s kind of worth it and I spend more money on more stupid crap on a regular basis.You probably won't regret buying the ProDot, but you might feel a bit silly for a while until you realize it’s actually kind of useful. 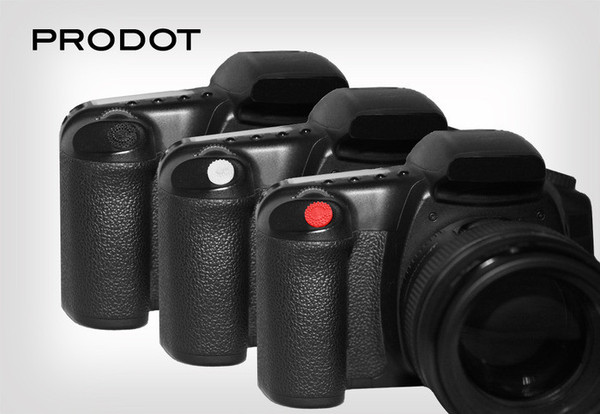 You can get it in red, black and clear, which is nice because you can have the benefits of the ProDot without really broadcasting to the world that you’re using it if you opt for the black. Or you can go red like I did and who cares what other people say (ok I care a little).

So against my original beliefs and what I was certain was going to be a completely justified assumption that this product was ridiculous, I’ve got to say I recommend it. It seems silly and looks weird but I’ll be damned if I don’t actually like it. A decent use of $10. Guilty pleasure, thy name is ProDot.

Final comment: If you were to ask "Jaron, would you buy it again?" my response would be "Probably."

I find myself accidentally tripping the shutter with my butt multiple times a day when slinging on a BlackRapid. I imagine this would make that 1000x worse?

My camera has an off button, also, but butt is bigger than the button, I do not have this problem.... :-P

Yeh, when I bought a longer strap for my camera to put sideways instead of hang it on neck, I was faced with the same "dangling" problem. Fortunately, I decided to take plunge with Capture clip (by Peakdesign, I believe). It's not cheap at $70, but man it's worth it. Now I put my camera sideways on shoulder and Capture on my belt. Capture keeps it secure from dangling and I've adjusted my strap to free enough to move, but at good length so that capture and strap both share the weight properly.

CustomSLR sent me a couple of these as a holiday gift after buying one of their C-Loops last year. Nice gesture, but I gave them away without trying them out.

I think it is quite simple to explain... Our (human body) muscles have so called "muscle memory". They remember movement, speed, pressure, etc that is needed to perform one or another "operation" after few dozen times you repeat that "operation/movement". In this case - pressing the shutter release button. After hundreds (thousands) times your finger remembers that movement  - distance finger tip has to travel to full release and pressure (force) is needed to apply to trigger AF. So after this distance has changed (height of that weird rubber thing) your finger still making the same movement and so it feels like it is "easier" to do it. IMHO. :)

http://en.wikipedia.org/wiki/Muscle_memory
Sorry for my terrible English... :)

I see where you are going with this, but I don't think that is it. I've always hated the shutter button on newer DSLR, I always felt like they were an after thought. When you cold and tired, or worn out that raised rubber button will come in handy over trying to reach for he plastic, loose, button.

Frankly, even before I read the description on what is the product all about, I assumed it was a hack upgrade button for a camera that would allow me to change my focusing point easily, kinda like a toggle button but having it just beside the fire button makes more sense to me than actually needing to do the  "joystick" rotation movement (up and down) with my fingers and thumb. Oh, those shots that I had missed just because my focusing point wasn't on the right spot. Well, till then.

Everyone made fun of the iPad before it came out and now look at who uses it. I plan to order a set for my 5D Mark III and GH2. Thanks for the review.

not my cup of tea but i do applaud the inventors for their originality and creativity to bring a new product to the market. good luck!

'Does it make firing the shutter more accurate? Again, amazingly it does. Using auto focus gets easier, you have to apply what feels like less pressure.'

I use back focus. I said it then and I'll say it now, it's a useless product.

Why not say, "I don't see a need in it for myself" rather than spouting off saying its useless without considering the fact it was developed by photographer who saw a need.

I for one, want one. I KNOW it will help for MY situation.

Well then princess, fill your boots.

Wow Chris... does your mother know you talk to others like this?

Ha, nothing like insulting someone when you've got nothing better to add, eh, Felipe?

Jesus, you need to calm down, someone needs to start moderating this thread to keep comments like yours off of here.

There's no place for such slanderous accusations on this website.

You're offended because I don't like a product? Get a grip.

Clearly you don't know the meaning of the word, John.

When I moved to Digital, that's one thing I missed, the hole in the shutter-button for a cable-release, that I used for my Soft-touch button that screwed into that hole and extended the shutter-button. This looks like a plastic version of that.

I wonder if anyone else used those?

I use back-button focusing and one thing that's bothered me about my latest body is that sometimes my thumb would have to hunt for the AF button a bit. Well, with a ProDot on it, the problem has disappeared. $10 might be a bit steep, but I spend more than that a week on coffee ...

That sounds useful. I'm trying to adapt using back-button focusing too and this may help a lot with the process.

I have carpal tunnel syndrome and can get a very sore 'shutter finger'.  Might be useful.

Still think it's stupid and while Custom SLT has interesting developments they are way overpriced. Things like this makes you wonder how much are they really after the technology or after your buck.

Ok, this is probably a silly question to ask but hey, that's what we're going for right? How about dots for other parts of the camera. I shoot a lot of nighttime photography in Alaska (aurora, milky way, sled dogs mushing at night) and use a remote for most shutter release situations, but I have a heck of a time finding other buttons - for instance, to change my ISO setting. When it's pitch black out, it's not always optimal to turn on your headlamp (especially is the guy next to you is trying to get a timed shot) or when you have gloves on and can't even feel the buttons! I would not be opposed to slapping one of these little bad boys on several parts of my camera :)

Reading this at work I nearly ripped the red track dot off my IBM laptop to try on my dslr, thought better of it though.