Re-Review: The Fotopro Tripod is Much Better Than Originally Thought

Before I heap on the apologies, I do want to say that I get sent a lot of gear. Gear that varies in required skill level, genre of photography and purpose. I've reviewed a lot of equipment over the years, and eventually I was bound to make a mistake- I'm pretty much the furthest thing from infallible. Well it happened, and I'm sorry. My initial review of the Fotopro tripod was negative due in most part to, you got it, user error.

When I review product, I do my utmost to be completely fair. It in in this endeavor that I find it difficult to take a side. When I review a product positively, I get comments like "you were paid to do this" and "this was so sponsored." When I review a product negatively, I'm besieged by readers who claim something must be wrong with me. Normally, I would only agree to the point that I'm a little odd, but in this case readers, you were right: there was something wrong with how I was using the Fotopro tripod. 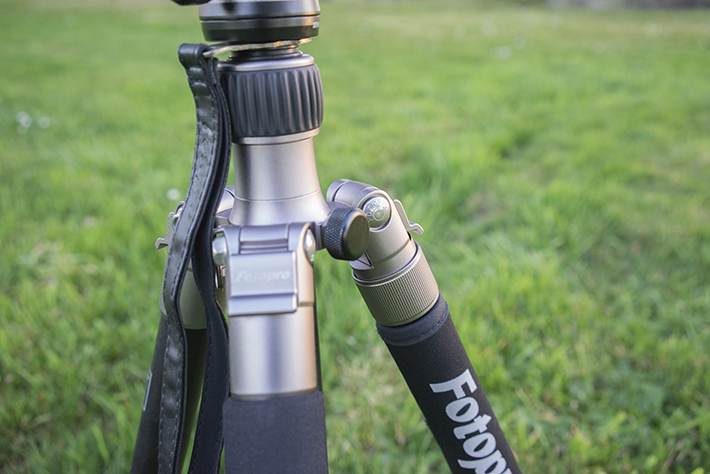 You see, I neglected to notice that tightening screw located on the base of the Fotopro tripod that acts as a secondary tightening measure on the neck. I find it to be a completely unnecessary addition if the primary tightening mechanism is built well, but it's there nonetheless and when unscrewed, the tripod miraculously worked a heck of a lot better. Why didn't I read the instructions? Because would YOU have honestly tried to read these? 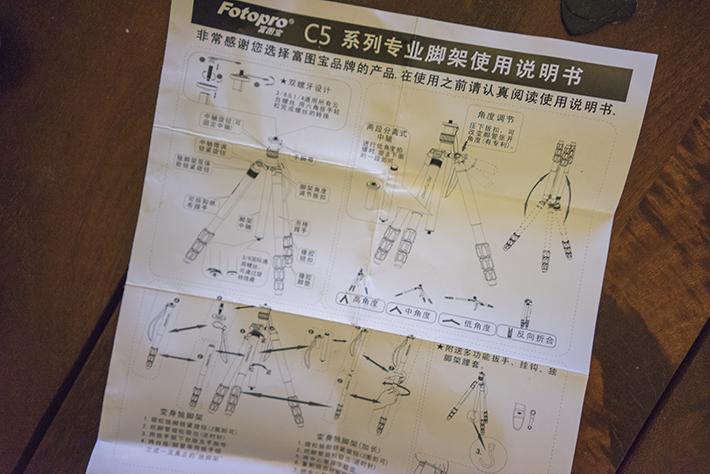 Didn't think so. But that doesn't forgive my ignorance here. So let's start over on this thing.

I stand by my original comments that the Fotopro tripod is not a new design and doesn't contribute a heck of a lot after basically copying successful competitors. There are two areas where there are discernible changes, and they may or may not be what you are looking for in a tripod of this design.

1) Fotopro added that tightening screw that really threw me. It does add an additional level of support when you have the neck extended, but it also can confuse (I am the perfect shining example of such confusion). It also slows down setup time, and sometimes I don't have that time to spare. But that's a bit of a trifle, and most of you would happily welcome a secondary support.

2) Fotopro tackled the legs in an intriguing manner. The legs clip open and closed in three stages, one more than MeFoto. They are also spring loaded, and can be moved into position by holding the trigger open. I thought I would like the spring loaded design more than what I have on my MeFoto (which is pull-out tab), but I don't. Personally, I found the pull out tab faster than the spring-loaded button. I do, however, like the additional leg stage, which gives more versatility for your camera supporting needs. 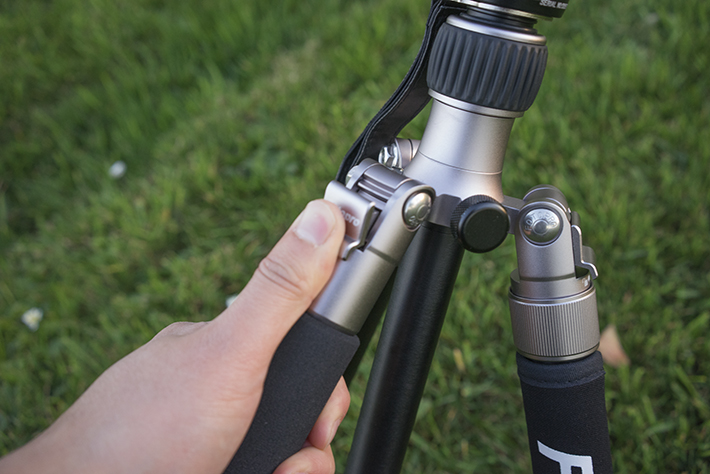 Other than those two features, and I guess the addition of a leather strap for easy grabbing, the design is largely the same. The Fotopro legs pull out three times, which is one less than MeFoto, but I find myself rarely using that last MeFoto stage because the legs are very skinny and don't seem that sturdy. Therefore, I did not miss them on the Fotopro. 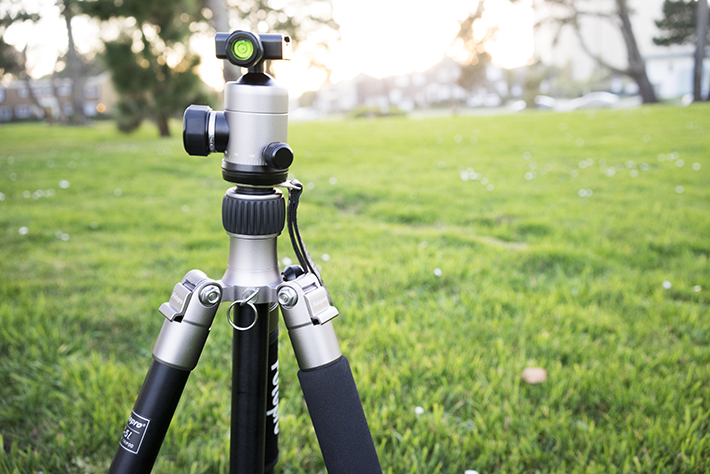 I stand by my original complaint that the bubble level, at least the horizontal one located on the plate attachment part of the head, is not great. It can work if you fiddle with it, but it doesn't like to play nice. I didn't find that it was all that reliable, and stopped using it entirely. The bubble level on the plate tightening knob is more reliable, but I personally don't use that one much. I am most often in landscape view on my camera. 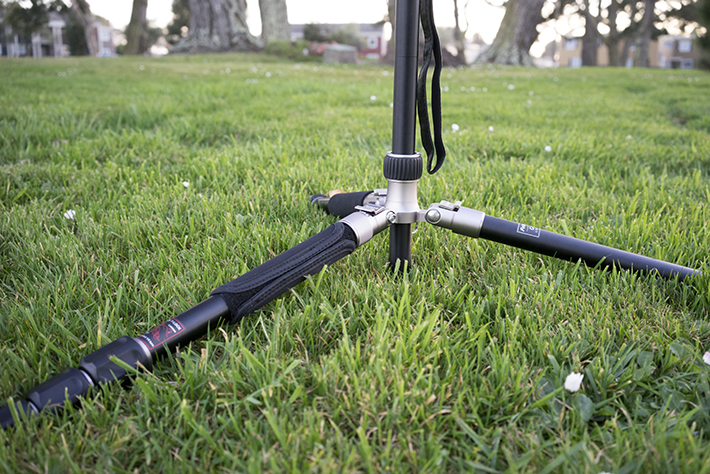 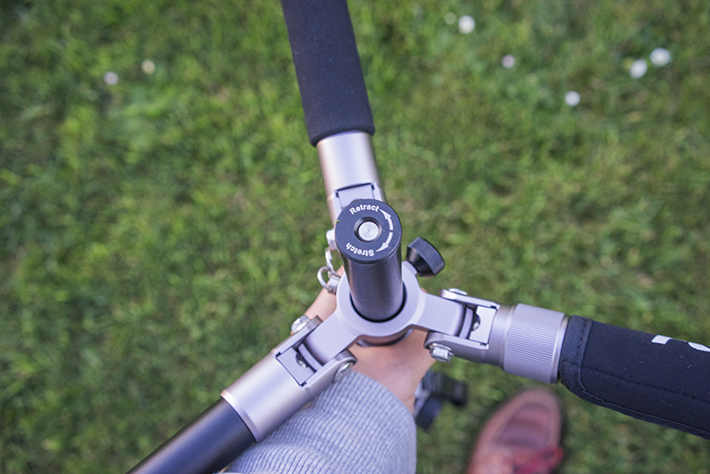 On the note of the penchant for unscrewing itself, that I also stand by. The panning is incredibly smooth, but it's because it, even when fully un-tightened, is quite stiff. With the pressure of a heavy camera pressing straight down on it, it will still unscrew itself often. But I do like that it pans well, and this is good news if you want to occasionally use this tripod for video. Or often, if you fancy that. Just note that I found the head unscrewing itself most when I used this for video.

Some other owners of this model complained that the legs would unscrew themselves during packing, unpacking or travel. I actually did not encounter this problem. The legs, probably because they are quite tightly fitted together, never extend unless I want them to (and even then I have to tug on them to get them to come loose). Like I said in the original review, that doesn't bother me much and it still doesn't. In fact, it sounds like an advantage, as it is always exactly what I want it to be.

One last thing I looked at was how well the head tightened for focusing. My last review complained it didn't allow me to find a focus point, focus, and then tighten the head and remain exactly where I was holding the camera. I went back and retested this. And then I tested it again. And then, to make sure, I tested it one more time. In each case, a 5D Mark III with a 24-105mm lens attached still dipped down slightly from my focus point even after fully tightening the knob. This would not happen if you were, say, pointing the camera straight up which almost no one ever does. But it will happen if you tilt down slightly to get a lower angle on a still or video shot, something all of us do all of the time. Is this a big deal? For most of you, probably not, but I would be remiss if I did not say something.

Three-stage leg angle locks
Tightly fitted legs rarely come apart unless desired (normally a problem with twist-lock designs)
Dual stage neck locking means lots of stability
Stability bag hook included and detaches when not in use
Carry bag is pretty nice, and even has a zippered side pocket

I have no problem admitting to a mistake, and I clearly made one here. I was obviously very hung up on the nearly impossible to collapse neck, but once I was set straight and overcame debilitating user error, the tripod immediately became easier to use and more reliable. I certainly don't see myself breaking this tripod anytime soon. It's solid.

Though I still have a few gripes, they are considerably tamed when separated from what was my biggest concern initially. The tripod has features its competitors don't, and it competes pretty well in the areas it mimics from tripods already on the market. Price-wise, it's well set at $189, which is just below MeFoto's largest tripod the Globetrotter. I think this is a good place for it- It seems like exactly the right price valuation for what you get.

Thanks Nick! I felt TERRIBLE (and stupid) when I realized my error. Hopefully this gives a better image of how this product really functions.

When a reviewer admit his mistakes and gives another chance instead of just scraping the whole thing, that's what I call good reviewing :)

I'm curious to know how a pull tab is faster than this spring loaded design for the leg positions? On my tripod that has pull tabs, it requires two hands; one to hold a leg, and another to pull out the tab. This spring loaded design looks like you can just grasp the leg column in one hand and press the tab with that hand's thumb and adjust- all one handed. Seems way faster and better ergonomics? Is there a faster technique for pull tabs that I don't know about?

Good question! So the way this tripod is designed, it still takes two hands: one gripping the leg and pushing down the tab and then the other securing the rest of the tripod so it doesn't move. The legs are tightly fastened, so they don't move up and down quickly or particularly fast/smoothly/easily. Combine that with the tripod's light weight, and you have to hold it down in order to use the tabs. And you have to do them one at a time.

In contrast, the pull tabs mean i can pull all three tabs up, then fold all three legs up immediately thereafter. It's not a heck of a lot faster, but it is faster. I was hoping to like the spring loaded tabs better as I said, but these didn't make the process any faster or easier. Different for sure, and some people may prefer it, but I didn't.

That makes a lot of sense. Thanks for the explanation.