Sony shooters are now blessed with an array of fairly fast 35mm prime lenses, a glaring void in its lineup not too long ago. The latest addition is the Sigma 35mm f/2, a faux-vintage lens that brings a lot of tactile refinement to a compact and classic form.

I’ve been borrowing the 35mm from Sigma for the last couple of months, and typically with my lens reviews, I like to give a sense of what it feels like to use a lens through spending a bit of a time with it out in the field. With the global pandemic, such opportunities are few and far between, but the lens did accompany me on a trip to the mountains not long before regulations in France were tightened.

The Basilica of Saint Mathurin in Larchant, France. Confusingly, it's not actually a basilica. Construction took place between the 12th and 16th centuries.

A reminder of the specifications (Sony version — the L-mount version varies very slightly in size):

“A classic reimagined” is how Sigma’s website describes its new (ish) 35mm f/2 DG DN Contemporary, part of its recently released I series of lenses for Sony and L-mount cameras. The entire range draws heavily on vintage aesthetics, and Sigma’s engineers have not only created something rather beautiful to look at, but lenses that have a physicality to them that make them particularly distinctive when attached to a Sony body and far from out of place when slotted onto a Leica.

If you’ve read my review of the Sigma 65mm f/2 DG DN, you will know that the aperture ring on these lenses is a masterpiece. Clickable aperture rings on electronic lenses don’t get any better (though filmmakers will wish that it was de-clickable), replicating the feel of a high-quality, all-mechanical lens and making you forget that there is no direct connection between the twist of your hand and the shift of the blades. It even sounds good, and it makes particular sense on the Sony a7 III, given that changing apertures with the thumb wheel is not a smooth experience.

The focus by wire ring is equally deceptive, the dampened metal ring giving a haptic feel that’s completely in keeping with the elegant, slightly cinema-esque styling.

Given the other compact 35mm offerings available, Sigma has done well to differentiate the DG DN from the competition. The Sony 35mm f/1.8 is more than a hundred dollars dearer ($748 versus $639), a shade lighter (9.9 oz / 281 g), and features a custom button rather than the Sigma’s aperture ring. The Samyang/Rokinon is markedly cheaper at $399, has a completely plastic build that makes it the lightest of the three (7.4 oz / 210 g), and a focusing ring that can be switched over to change the aperture, though the experience is a world apart from the Sigma.

All three are similar in size, each sporting nine rounded aperture blades and each giving autofocus and sharpness performance that won’t disappoint anyone given their respective prices. With only a single gasket (at the bayonet), the Sigma theoretically offers the worst protection against the weather, but it is clinically sharp, and for me is by far the most beautiful of the three and gives the best shooting experience in terms of physicality. If such things are important to you — and to Leica owners, they weigh heavily — it’s a no-brainer.

In addition, you get a metal lens hood to match the metal construction of the lens itself and a minimalist magnetic lens cap that’s a nice touch as long as you overlook the fact that it’s impossible to remove if the lens hood is attached. Everything about this lens feels precise down to the millionths of an inch, whether it’s the seams on the lens barrel where the various rings slide alongside one another or the satisfyingly snug fit of the lens hood.

Such a lens feels almost out of place on the clunky box of buttons that is my a7 III. Sony users are not used to refinement, and these new lenses from Sigma are something of a shock, bringing finesse to the photographic process that for many (certainly the enthusiasts) will be unfamiliar.

The Mountains and the Forests

If the snow looks a bit brown, that's because it is. Sirocco winds carried dust from the Sahara in February, staining the Pyrenees.

The 35mm f/2 came with me on a week-long trip to the Pyrenees mountains that saddle the border of France and Spain. For days in the peaks and the valleys, it made for an excellent companion, suitably compact and not too heavy, while delivering stunning image quality in some very hazy, low contrast conditions.

Closer to home, the lens came on the dog walks into the forest, being an ideal walkaround lens. Perhaps my only complaint is that this lens delivers such fantastic sharpness and contrast that the resulting images almost too clinical for the excessively busy, high-contrast scenes that I often find myself shooting. The DG DN does such a good job of pretending to be a vintage lens that you almost expect the photographs it produces to have more character to them. Instead, you get stunningly crisp results that are largely free of aberrations — and obviously, this is more a reflection of my work than the lens. Maybe it’s simply too good for me.

Given how sharp this lens is, it almost feels as though the out-of-focus areas should be far crunchier than they actually are. The reality is that the bokeh is pleasantly smooth.

Aberrations are visible though not troublesome (fringing is less pronounced than the Samyang/Rokinon), vignetting is unremarkable, and distortions have been reasonably well controlled. Sharpness is excellent wide open, and while things get sharper at f/4 compared to f/2, I had to squint to see a difference when shooting on my 24-megapixel a7 III.

All straight out of camera.

Bokeh balls are almost completely round and relatively smooth, with onion rings that are only just present. Autofocus is snappy and holds up well in low light and when shooting directly into sunlight, probably because contrast barely seems to drop. I managed to uncover one strange flaring effect that I was then unable to reproduce. As you will note, despite its presence, contrast remained largely unaffected.

If you’re searching for criticisms, this lens suffers from breathing, which is likely a result of being so compact, and not unique to the Sigma.

Fstoppers’ James Madison has previously published a detailed review of this lens, so be sure to check out his thoughts for a more thorough test.

Sigma has done an excellent job with this compact, classically styled lens, and I'm confident that it will be the best seller by far of its I series glass. I shoot a lot at 35mm, and were I forced to choose, it would be an obvious choice over the others; the 24mm f/3.5 and the 45mm f/2.8 don't tickle my excitement in terms of their maximum apertures, though the 65mm f/2 would be a nice addition were I allowed a second.

Sony users are now even more spoiled for choice at 35mm; Panasonic shooters will welcome the addition, and a fair chunk of the Leica crowd may be tempted given its looks and tactile shooting experience, as this feels like a different proposition compared to other non-Leica L-mount lenses. 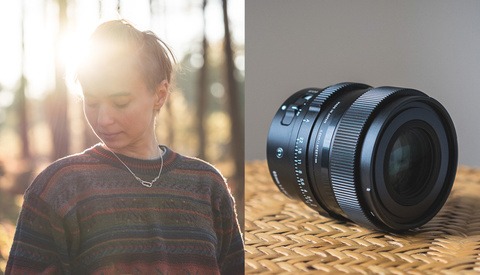 FWIW, I don't think it physically looks good at all. I find the quality of the images reproduced here not that good but I'll just take your word that it is high quality.

Instead of just reviewing the lens, this article went for a clickbait headline. A Sony will never feel like a Leica (Leica M or SL? The headline didn’t specify) or any other camera for that matter. I ended up with a Sony FF camera and a Voigtlander manual lens simply as I missed the manual experience I had with a Pentax ME Super I used to own. Of course my current camera isn’t quite the same experience as shooting with a manual film camera but has other advantages. I’ve also given up trying to post process photographs to make black and white images look like film - it’s not the same as an image from a film camera (both the results and the satisfaction), especially when adding fake grain. Still, I clicked on this article so the clickbait clearly worked on me.

wow, make a Sony feel like a Leica... too funny.