I have seen some truly amazing photos of the Golden Gate Bridge, but one stood out and so much I had to catch up with the artist to learn more.

Michael Shainblum started taking photos when he was young. He picked up a camera and fell in love the very first day. It wasn't long before photography was his favorite thing to do and a daily adventure. The reason was simple. It was so much fun to capture images and a very satisfying creative outlet. Years later, the main driving force every time he picks up the camera and heads out has not changed. It is his true passion and he enjoys every second.

Shainblum is a photographer who knows the famous Golden Gate Bridge well having shot it over a hundred times from many different vantage points. One day, an idea for a special kind of shot popped in to his head. This idea involved getting the bridge with a number of lightning strikes in the frame. There is no doubt it would take a lot of patience. There were a number of unsuccessful attempts leading up to the evening his dream photo was finally realized. He remembers many nights feeling discouraged after getting no shots and arriving home cold and wet. It took about five years before the right conditions presented themselves.

Luckily for Shainblum, on that night there would be a lightning display to remember. The shots were all taken from a classic and even popular location, but the wide point of view and the high angle were perfect to capture the impressive lightning bolts. While the time-lapses ran Shainblum and a few other photographers at the scene watched and yelled in joy as they witnessed strike after strike over an awesome three hour period.

Shainblum's technique to capture the lightning involves setting up a time-lapse remote trigger on continuous and using long exposures. He has been shooting lighting for over 10 years after capturing his first successful strike at La Jolla Shores in San Diego, California. He calls himself lucky to have witnessed a number of great storms over the years, but I call him determined and driven to be there photographing them. 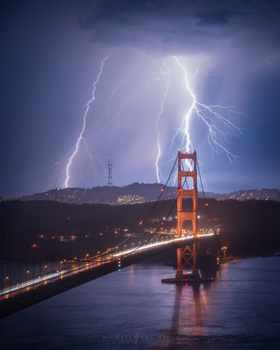 Unless you are blessed with cover to shoot from, shooting storms involves a lot of wetness. Shainblum recommends using a Rocket Blower and relies on it as his go-to tool for removing water from the lens. It can be done from the side without impeding on the image and there are no smudges or risks fogging. You can see in the time-lapse above that some droplets popped into some of the frames and then went away. Shainblum said he had to blow off the lens almost every minute for this shot.

The final image is composed of 30 of the best exposures stacked and blended into one. While some shoots require a good amount of time to go through and can remain unfinished for years, the excitement of finally getting these shots helped it all come together quickly. As you can see, the end result is quite a treat for the eyes. In my opinion, it is truly a next level photo. And by the sounds of the time and effort that went into it, I can safely say the photographer deserved the rewards of such a memorable shot. 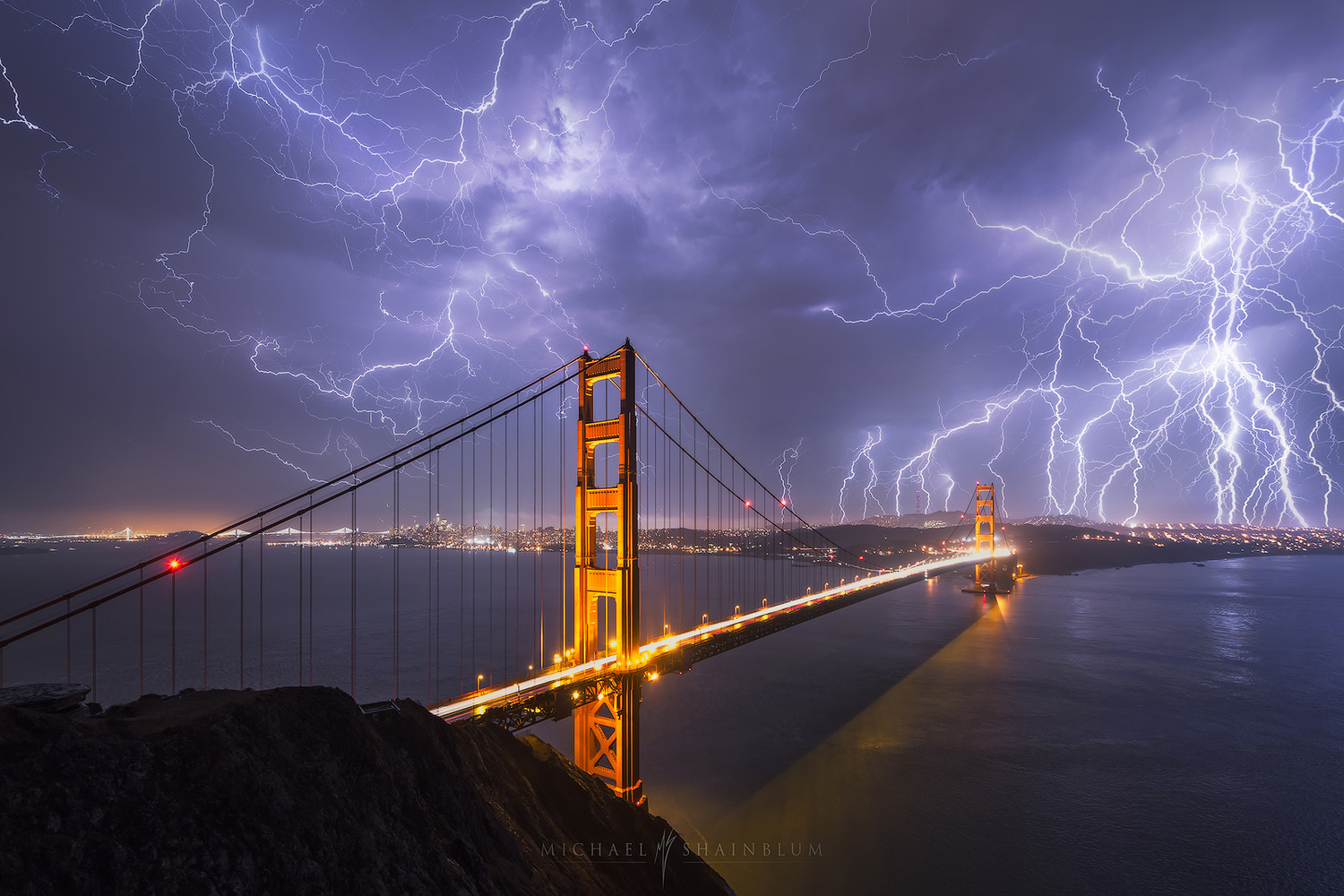 Lightning over the Golden Gate Bridge 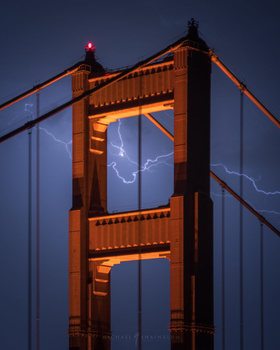 While Shainblum admits he prefers shooting in places a bit less traveled and more remote, this shot was on his bucket list since the day the idea was born. Five years later he was just so happy to get this shot and says it is a night shooting he will never forget. Earlier in the night, there was heavy fog cover and it looked like the lightning strikes would once again elude him. He did not give up and got the shot of a lifetime. We could all learn something from his perseverance.

All images used with permission by Michael Shainblum.

Be there or be square - Photography

Epic! This is good inspiration for the upcoming thunderstorm season. Great photo, hope you make a wicked large print out of that.

I thought great article and all, until "The final image is composed of 30 of the best exposures stacked and blended into one.". I think you should lead with that. Something like "unfortunately it's not a single shot". Because everything leading up to that in the article is misleading : "This idea involved getting the bridge with a number of lightning strikes in the frame. There is no doubt it would take a lot of patience. There were a number of unsuccessful attempts leading up to the evening his dream photo was finally realized. ", all of this made me think he got a miraculous shot with multiple lightning strikes at the same time. So now I'm disappointed.

I hear you but as soon as I saw the photo I assumed it was a composite. I've never seen anywhere near that number of bolts in one strike.

I'm not an editing or composite purist. I love what he created and wanted to share. Thanks for reading.

I don't mind it's a composite, I'd have liked if you'd just said it sooner and more clearly. "There were a number of unsuccessful attempts leading up to the evening his dream photo was finally realized. " was a very misleading sentence, I thought "what ? Is it really a single shot ?".

Yeah, sorry for the confusion. The unsuccessful attempts meant grabbing all the gear, heading to the spot in often crappy weather, and not getting anything to work with. A lot of photographers, like me, consider the capture of images the raw materials to create art from. I think you are adding a ridged definition of a more general term to some people.

Thanks for reading, Paul!

Love the story, love the shot and 100% the guy who took the many shots that make up this image. However, saying that he got "the shot of a lifetime." is either lazy writing or signals that the writer doesn't understand what he's writing about. Stacking multiple shots to create an image like this is hard work, but its not "the shot" of a lifetime which suggests a single triggered shot.

I think the photographer had creative license to process how they choose. I get what you're saying but disagree. Thanks for reading.

Yeah, I totally agree with that, but nowhere in my comment did I suggest that the photographer did anything wrong. I said that YOU did something wrong. You refered to his final image as "a shot" which it is not. It is a fantastic, created image, but it is not a single shot. Perhaps you do not understand the difference. And, you're welcome. Great article and story otherwise.

Thank you, I thought the same thing. The article is written in a way that makes you think he was lucky as hell and saw all these bolts at the same time. In the end the article is detrimental to the photographer because you first thing "wow" and then "oh...".

He kept a camera in a fixed location for three hours with the idea to combine the lightning bolts. It's not like these were bolts from somewhere else or not his captures. I admire the craft and disagree with the notion that I somehow lead people along. Not knowing this is a composite at a first glance and faulting me for that is questionable.

I don't do composites and I'm not a pro. How is it questionable for me to make the "mistake" that I made in believing that it was a single shot ? You're saying that I "should" have known and that it's my own fault... That doesn't feel right, clearly other people had the same issue I had. To be clear, I suspected it was a composite when I saw it first. But then you say "with a number of lightning strikes in the frame". Saying "in the frame" makes me think one exposure, not multiple. Then you say "There were a number of unsuccessful attempts leading up to the evening his dream photo was finally realized." That makes me think he went several times, but there was only one lightning bolt in the frame, and that one evening he got incredibly lucky and got multiple bolts in one photo. You could have said that one evening he got enough shots to make his composited vision come true.

Yes, I could have said that but I didn't realize at the time of writing that anyone would feel mislead.
By keeping a camera in one spot for a timelapse, you are able to combine the best parts of what you captured into one. The frame in this case stays the same so that is what I meant.
Can we agree that I acknowledge the confusion but was in no way trying to mislead or disappoint anyone?

For those of you who don't live here, in CA lightening is somewhat of a rare occurrence so this is even more amazing. I am more of a purest and am not impressed with stacked or combined images, but I am a photojournalist after all and would be prohibited from submitting one to my editors. However I really love the one that is portrait orientation and appears to be a single images.

He did mention it was rare to see so much. I love that portrait one too. Thanks for reading and commenting, Patrick.