Tokyo is notorious for its work culture, with employers renowned for pushing staff to commit up to 60 hours per week. As a consequence, many often turn to alcohol as a coping mechanism and a way to let off steam. The results feature in photographer Pawel Jaszczuk’s photo series, "High Fashion".

The images shine a light on the extremity of such ruthless occupational pressure, with adult men – in full work attire, no less – slumped in doorways, and on uncomfortable staircases. There’s something to be said about a man who is still wearing his suit and yet is so exhausted he takes refuge in a dirty alleyway.

Jaszczuk takes to the streets on his bicycle after midnight to capture the series. Speaking of his aim, he said he wanted to capture the culture of the city, but also the vulnerability of its inhabitants. The thought-provoking images raise many questions about the morality of men – many of whom presumably have a family waiting at home – working tirelessly to be able to afford to live, but still ending up sleeping on the streets.

The series in its entirety is now published in Jaszczuk’s new book, High Fashion. You can see more of his work at his website and on Instagram.

All images Pawel Jaszczuk, and used with permission.

I find it completely ironic how this post is showing on a timeline right before article "The Subtle Ethics of Street Photography and Why You Should Think Twice Before You Do It" :)

I agree that it's ironic. But it also answers the question as to why you might do street photography.

These photos are pretty powerful, even given that we don't know the details about any of the people photographed. They certainly raise some questions, at least for me, about the work culture there.

Oh, certainly the photos are great and they had to be taken.

LOL!! these are just drunk dudes.

Okay I didnt the article but the title said overworked. then on the article overworked and intoxication. The titlte is a bit misleading

Hahaha! They're not "exhausted" and intoxicated following "crippling work pressures." They're just intoxicated! Coz many Japanese can't hold alcohol or don't know how to drink. You see the same everywhere around Shinjuku, Shibuya in the morning, Setagaya-ku, everywhere in central Tokyo. Business men, college students (specially college students), older retired guys, everyone and everywhere. Good thing you could do this in Japan, tho. Do that in a Latin country and you'll probably never wake up again. 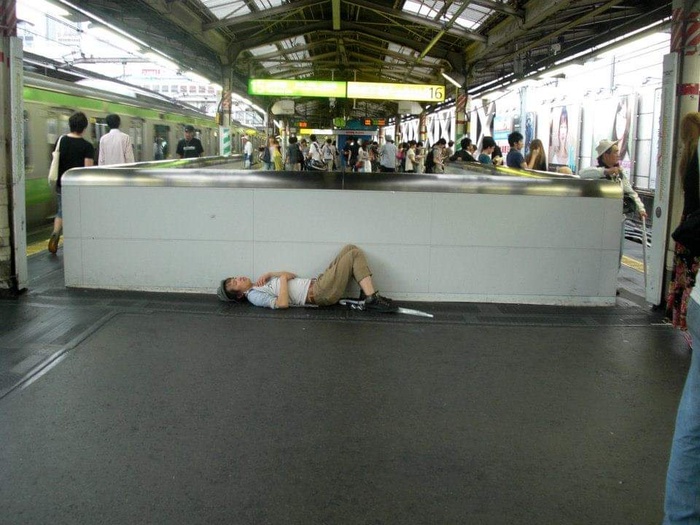 Offensive? They're offended because they got caught passed out drunk?

Unfortunately many don’t have a choice. Drinking with your boss and clients is considered part of the job for many people here and they are pressured into doing it. Drinking cultures in the west are much different than in Japan, right down to having a correct way to hold the bottle as you pour their drink for them.

True, you are right. Japan's culture is so different with so many nuances. It's too bad people think it's OK to photograph people like that. It is offensive but the Instagram glory is so much more appealing then basic respect. And no, I would never just photograph people in that state.

The people passed out or sleeping, are also an offense to the culture and or society. Id say its a wash, great shots.

first and foremost they themselves are responsible for making a fool of themselves.
I don't find portraying them a good photo, neither humane, but maybe, that can work as a wake up call for them.

It’s easy to point the finger and say “it’s their fault” when you’re unfamiliar with the work culture here. As I’ve already mentioned above, at many jobs drinking with your boss and clients is often seen as part of the job, building relationships is very important here. In some cases you don’t get to stop drinking until the boss says you can. Compound that with a 60 hour work week, and it all adds up. Maybe that’s true for these guys, maybe not, but based on the stories I’ve been told, they might not be solely to blame. It’s likely more of a problem with the system than an individual problem.

I mean, I only work 45 hour weeks here, and that’s considered a light schedule to my clients.

And it’s not just businessmen. My highschool aged clients sometimes fall asleep mid-conversation. I honestly don’t know how you fall asleep while talking, but they’ve managed to do it somehow.

I love many things about this beautiful country, but the work culture isn’t one of them. Many of my clients are pressured into drinking with their boss and customers, coming in on their days off, and spending what little time they have at home doing more work. I’ve had so many people tell me they “took a paid vacation” but went to work because they felt guilty and other tell me they hadn’t used a paid vacation day in over five years. I’ve had others tell me that during peak periods they only go home 3 times a week, including weekends, for a change of clothes but otherwise live at the office for weeks (their office even has a shower room and sleeping area). These don’t apply for everyone, but it’s more common than it should be.

My wife used to work 9am-1am every day, then had no choice but to spend her day’s salary on a one hour taxi ride home.

Sure, some of these photos may look funny, but when you start to hear what the stories behind them might be, it turns more into a tragedy.

I would like to add that it also shows how safe Tokyo is, all those gold watches, expensive shoes and their luggage, have not been stolen. Talking about the vulnerabilities and moralities of men, i think Japan can also teach other countries something. Maybe -subconsciously- these men knew its safe to go sleep there.

To me the discussions here alone, as well as my newfound awareness at the work and professional drinking culture in Japan, as well as the overall safety of the area, gives validity to this photo essay.

For a country known for it's people being demure, smart, hard working, non-violent (per capita), and a lot of other really fine things.. I have to tell you, despite having been to many parts of this huge world we live in, they are without doubt some of the most self-tortured humans I've ever been dropped into the middle of.

My two weeks in Tokyo and some of the surrounding areas were some of the most disturbing images in my mind's eye as I sit here at 58 years old. And although I did not see this type of thing there. I do know of the suicide rates, manor in which they go about it -- all of it is really really bad. You wouldn't envy anything about this culture or the way they drive their peoples to extremes.. What does it say about at country that actually vends young girls panties at subway stations? Or think that going home once a month and sleeping nightly on a street or in a human tube os perfectly normal things?... Great food -- crazy lives.