Break The Cycle: A Creative Campaign Aimed At Stopping Violence Against Children

Y&R, A Mexico-based advertising agency, recently created this striking series of photos depicting the cycle of violence that is so prevalent in homes across the world. In an effort to raise awareness of the fact that children who suffer emotional or physical abuse at the hands of their family members will be more prone to act in the same way in the future, the campaign shows frightened children being attacked or abused, eventually growing older and angrier, only to repeat the process on what is presumably their own child in the future.

According to the ad, 70% of children who suffer abuse by their parents will end up abusing their own children in a similar manner in the future. A somewhat sobering statistic, indeed.

I absolutely love the emotion and mood conveyed by the use of light and shadow in these photos, not to mention the very creatively executed concept. Apparently the judges at the Cannes Festival agreed, as it was awarded a Golden Lion award at the event. 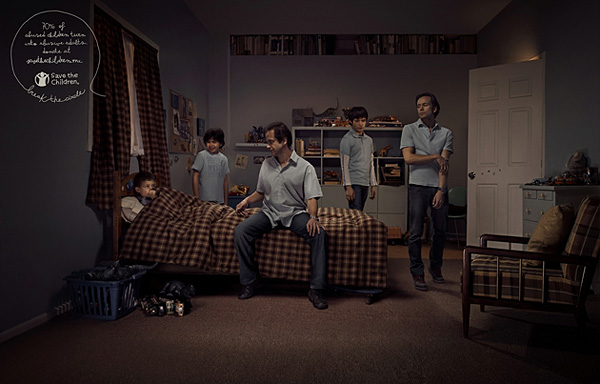 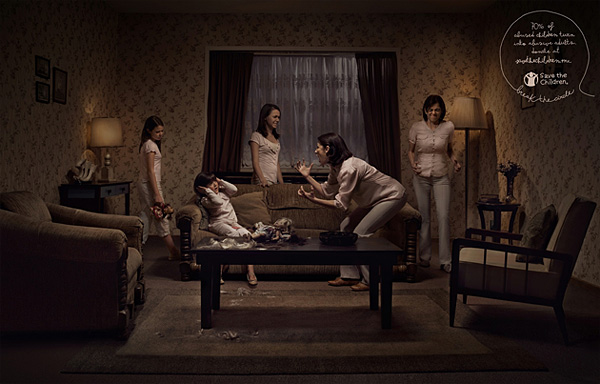 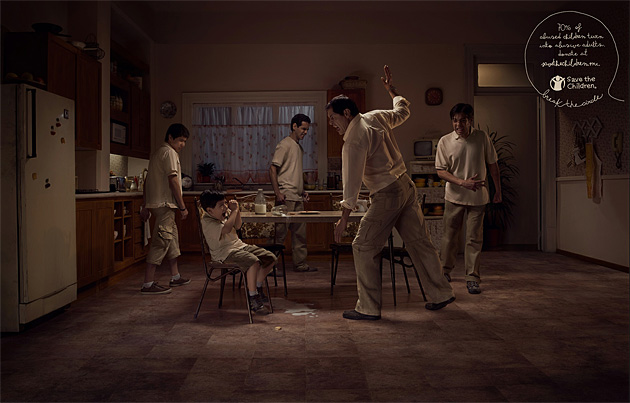 Posted In:
Studio
Other
19 Comments

Yan &amp; Rubicam (Y&amp;R) it's not a Mexican but American Company. Nonetheless it was indeed Y&amp;R's Mexican branch (
http://www.yr.com.mx/ ) to realize this (really well made) campaign!
(I Know; I'm punctilious)

you might even want to say "Young&amp;Rubicam" for the real name :)

What a brilliant concept! It took me a couple of seconds to realise why there were several people in the scene then it clicked. Great.

This is the work of  an Argentine Photographer Ale Burset  site: www.aleburset.com

With agency work like this, the project has been story boarded, approved by client, reviewed by the creative director, and only then passed on to the photographer (under the supervision of an art director, in most cases). Like a movie, It's the collective effort of all involved, not just the camera man :-)

I can say working at an ad agency myself, this is absolutely true. Although, being both the director of photography and the main photographer I get the chance to be a little more creative in the process. Every ad agency is different though.

Love this! My only complaint is that I want to see the pictures bigger and FStoppers seems to have crashed their servers.

I tried to locate larger images, but was unsuccessful. My apologies!

I notice a lot of advertising uses this kind of semi-animated / HDR-ish post processing look.  Anyone know how to do it or have links to any tutorials?  I can never really find the right key words on google.

If by semi-animated you mean multiple instances of the same (or intended to look like the same) person, put the camera is on a very steady tripod and set everything to Manual.  You can shoot as many instances as you like and mask them together into one composite image.  Once composited, there are a number of 'effects' that can be used to create an overly tonemapped "bad HDR" look including settings in camera RAW.  Google "tonemapping" or play with Photomatix.

Really?  It's just some tone mapping?  If I every try to create an HDR with a dark image like this one I get pretty bad results.  I've achieved a fairly similar look using really well controlled light.

This is so inspirational!

There is an agency named Y&R, A Mexico-based that made an amazing series of pictures that are explaining the cycle of violence that is so dominant in homes all over the world. It was done for the sake of raising consciousness about the fact that children who are suffering from emotional or physical abuse at the hands of their family members are more prone to act exactly in the same way in their future. The campaign displayed children that were scared, being attacked or abused, will later when grow older develop aggressive habits only to repeat the cycle of their childhood, the one they faced and will apply to their own child in the future. A site https://ifollowemployeealerts.com/prevent-workplace-violence/ will be very useful for us to deal such kind of cases.