I love fashion photography. It has been a dream of mine to shoot for magazines such as BAZAAR. Benjamin Kanarek did just that and had the opportunity to shoot Model and DJ, Alexandra Richards who is the daughter of Rolling Stones Keith Richards. From the looks of it, Benjamin went for a very simple look. Looks to me like a single Light source from overhead and a white wall with harsh shadows. Thats a bit different from most fashion shoots. Usually photographers go for soft shadows and use key lights, rim lights and fill lights. So seeing a high fashion shoot done with a simple technique is quite refreshing.

Here's a little bit of what Benjamin said on his blog about the shoot:
"Model, DJ, Fine Artist and it Girl Alexandra Richards, Daughter of Rolling Stones Keith Richards and Super Model Patti Hansen, celebrates the Holiday Season in “The Party”. She poses in front of Benjamin Kanarek’s camera for Harper’s BAZAAR en Español, December 2012 issue.

Alexandra styled by Vanessa Naudin shows her glitter and glam side with Lanvin, Roberto Cavalli, Christian Dior, Chanel, Burberry Prorsum, Moschino, Givenchy by Riccardo Tisci, Bottega Veneta, Louis Vuitton, Gucci and Prada looks. Dazzling, sparkly and festive highlight this holiday season. You can be sure that when you show up at the party, you will be the proverbial enchantress. So have a Ball and enjoy the 2012 festivities like Alexandra."

Make sure to check out his blog for more of his work! 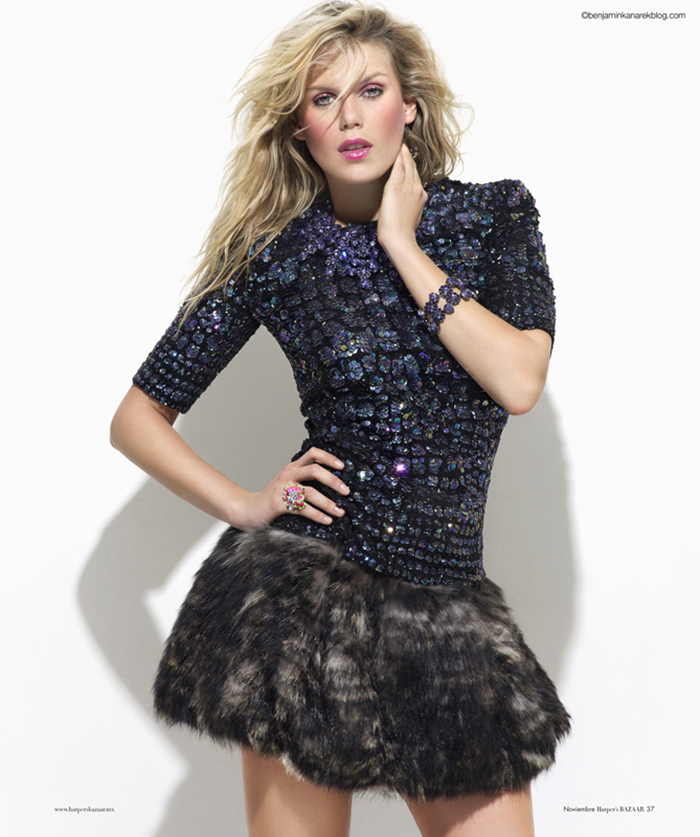 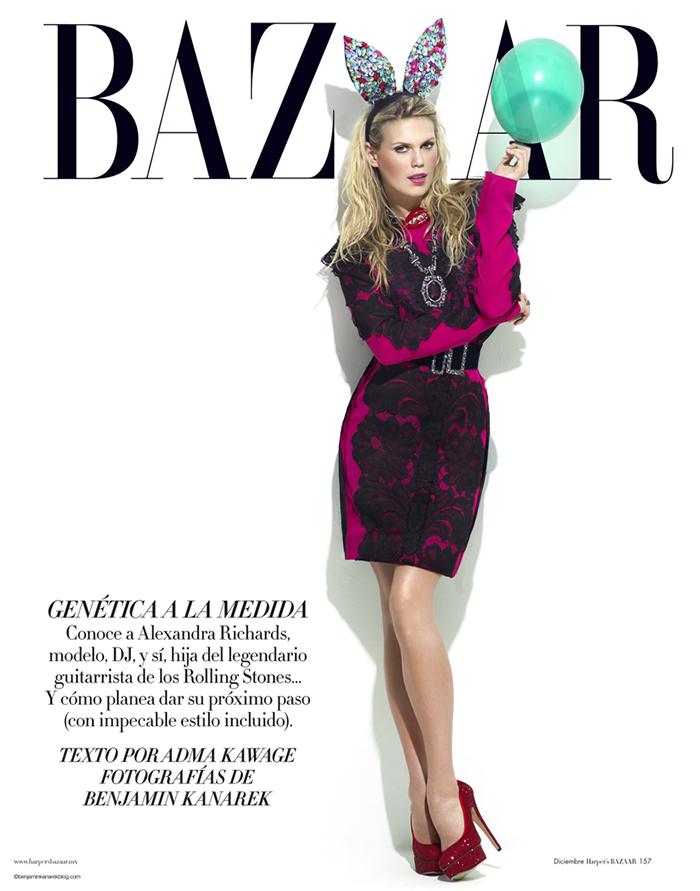 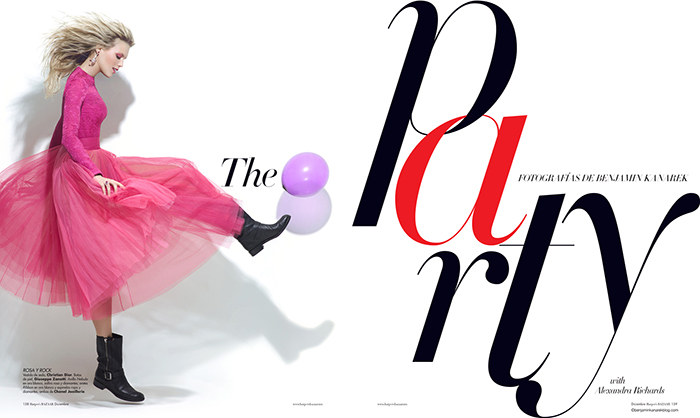 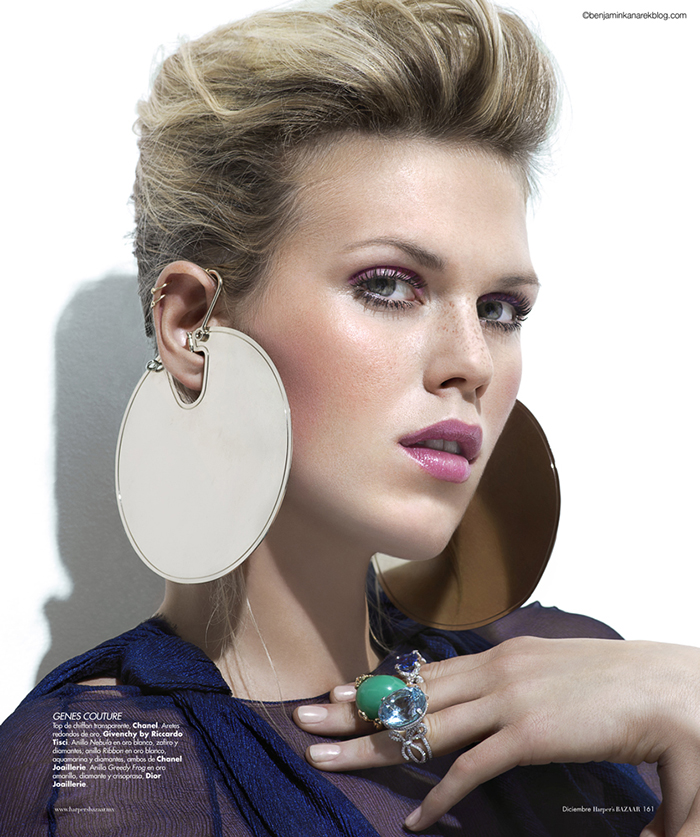 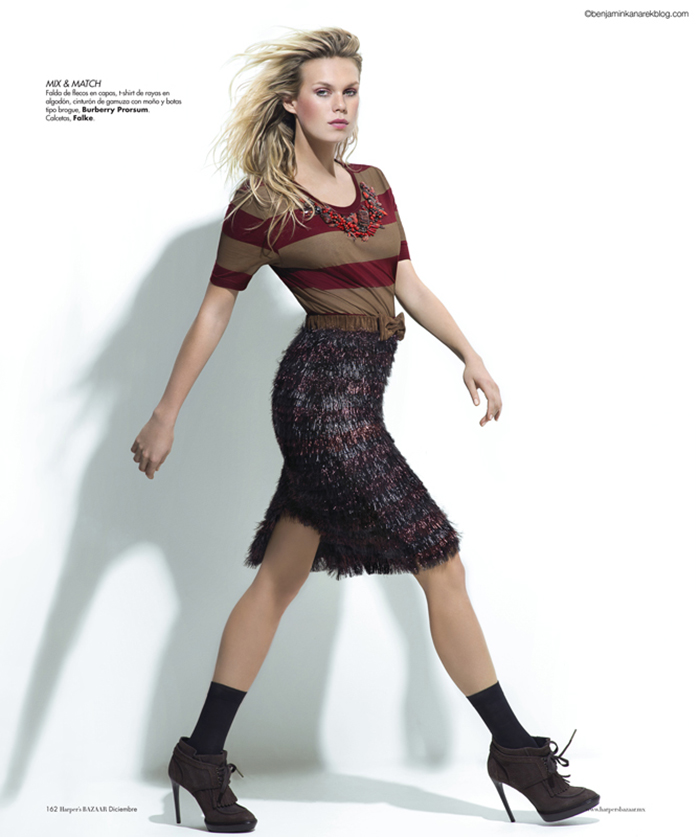 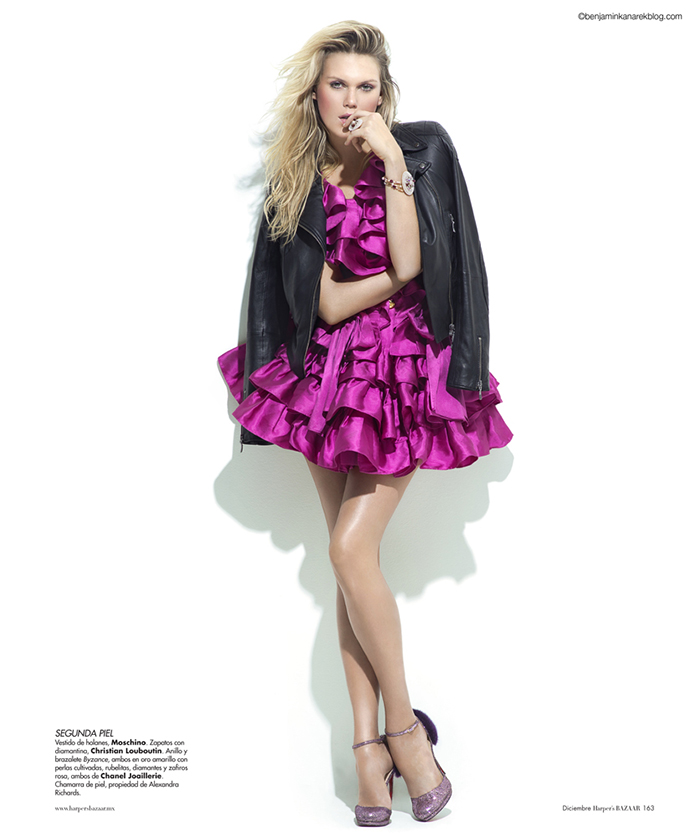 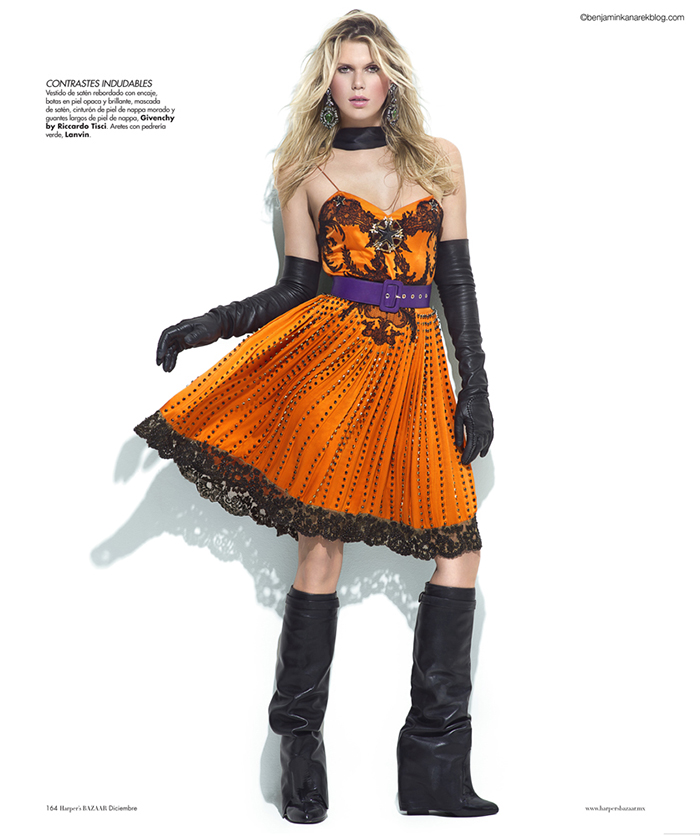 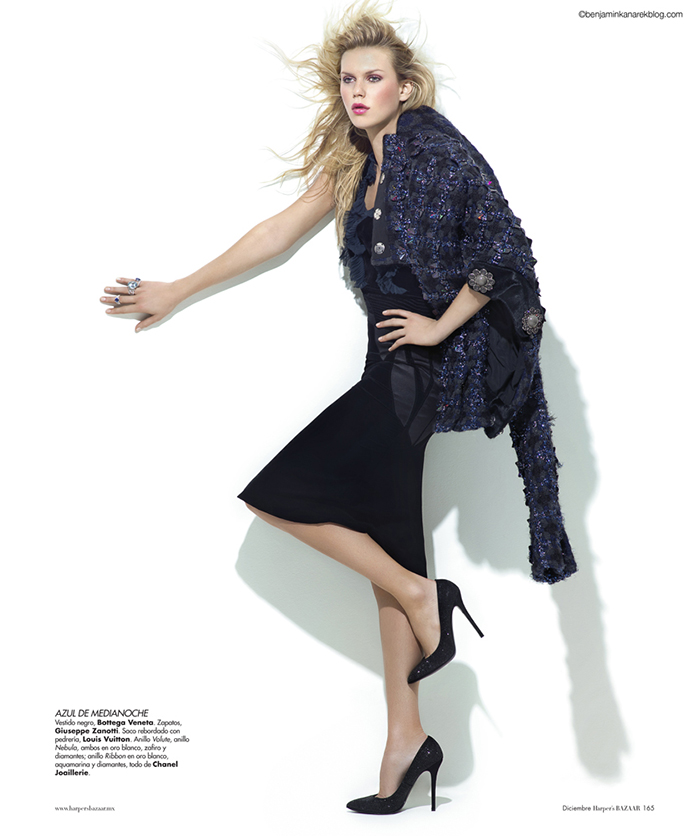 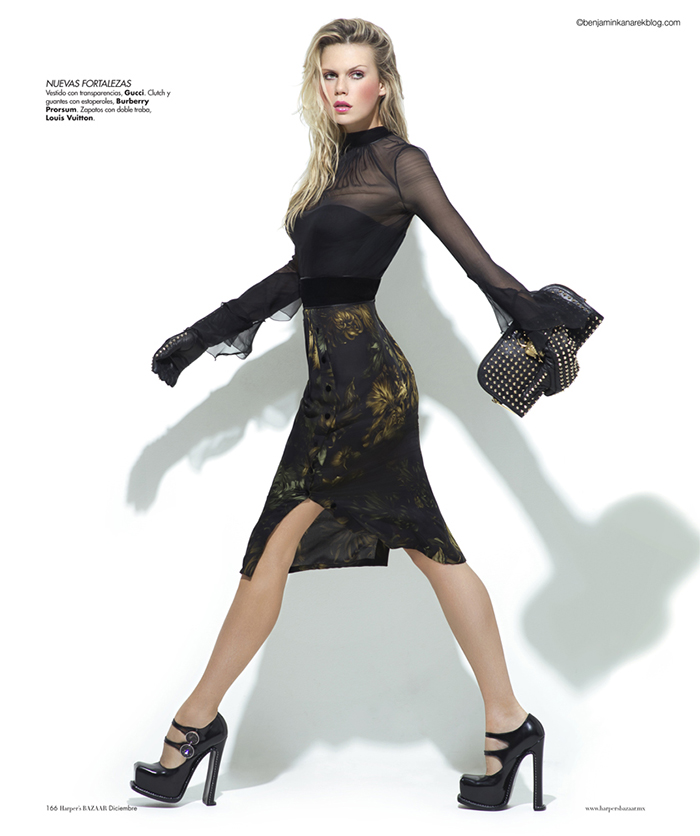 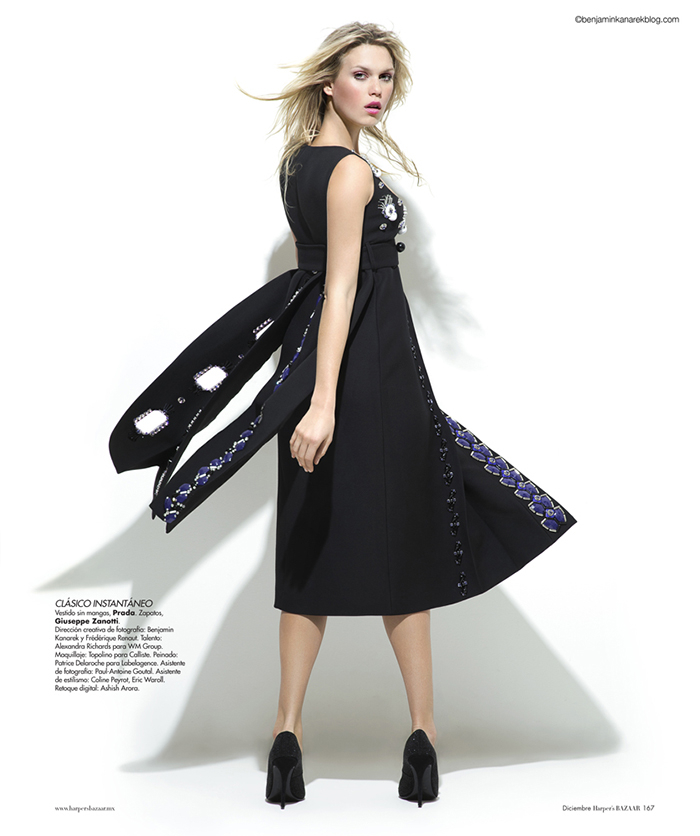 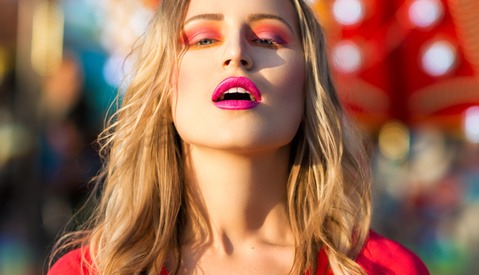 I hope they were wanting those shadows fake.

They do It's a catalog shot

She reminds me of Rumer Willis when it comes to her face. I don't know what it is but famous people sometimes have kids with the strangest faces. She's slim, she's pretty but she should not be modeling for this magazine unless it's an article about her being famous. If she doesn't know who Mix Master Mike or DJ Q-bert is, she is not a DJ, she is just a pretty girl that plays other people's music.

I was wondering if they were "really real"
Thank you for the details!

Nice of you to post here Benjamin, very interesting, thanks :D.

Great stuff Benjamin. I would of thought a large light source would cast soft shadows like that no? On the second pictures from the bottom, you caught her at a perfect walking pose...Do you have her walk through the set or is this a ONE STEP movement and repeat until you get it right?

Just watch the video...Back and forth all day long LOL :-)

Alex was a real trooper. Look out for the interview with her coming out soon...

Gratz on the feature Benjamin :)

Oops, missed the video, I'll go back and watch it. Thanks for sharing.

Is there a trace of Richards in that face? I dunno, maybe so, but she looks awesome.

She sure is a lot prettier than Keith... but then again, I bet she can't play the guitar as well. :) Nice shots.

"Thats a bit different from most fashion shoots. Usually photographers go for soft shadows and use key lights, rim lights and fill lights."Um... I guess it's been a while since you looked at a fashion mag Chris?!?!

Anyway top work as usual Benjamin. Thanks for always being so open about your process.