Since the Eagles were not playing today (they beat the Giants last night) I had some extra time and reworked a set of images I shot in 1974. I had borrowed a Nikon with a motor drive from the late lamented Hollywood Photo where I was working, and I was playing with sequences. This is something I have fooled with whenever I had equipment capable of shooting multiple frames per second with varying results. Some recent efforts have been posted here.

The images involved this time were the first nine of an 18-image Tri-X sequence shot on Penn Avenue (Rte 422) in West Wyomissing on my way to work. As the car was moving, the camera position was obviously changing with every frame, and getting a seamless panorama was impossible. After a few vain attempts in the darkroom back in the day, I gave it up for a bad idea. Now, with digital tools, seamless was still impossible due to the ever-changing perspective. Instead, I keyed on the curb and the stone wall and let everything else go wherever. I only used the first nine images in the sequence because the automatic alignment did not work at all (could this have something to do with it being grainy black-and-white film?) and manual alignment of the nine was difficult and frustrating enough.

Finally, as I was completing what I had planned to do, I remembered that Photoshop can colorize black-and-white images. So, just for kicks and giggles, I selected the black-and-white portions and gave it a shot. The buildings (they're still there) are indeed red brick as shown and the pillars are white. I have no idea what color the van actually was (it's not still there), but I really doubt Photoshop got it right.

Here are both versions. 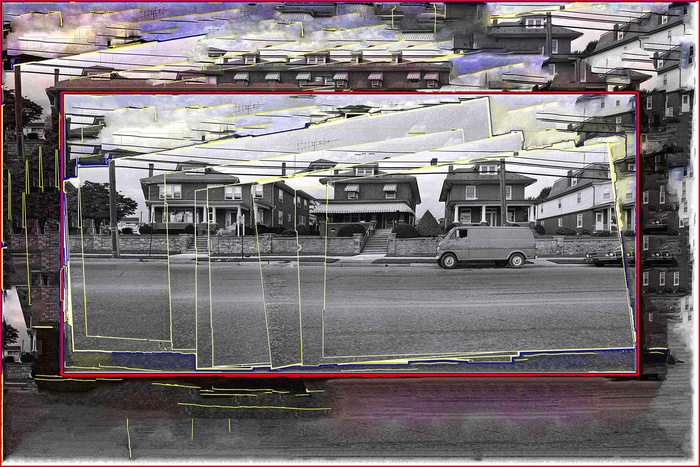 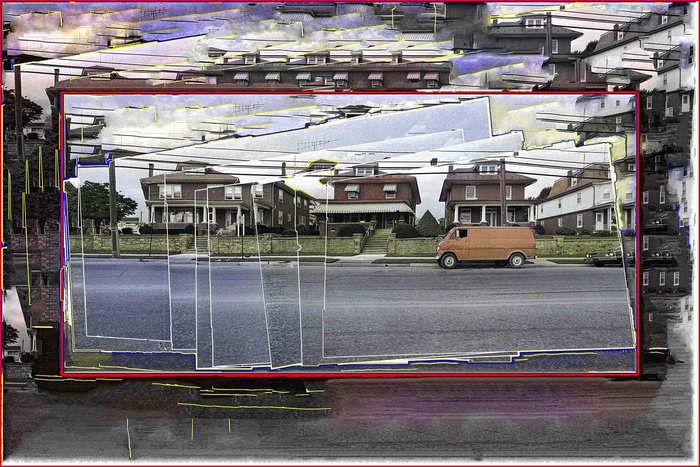 Wow, that colorization is really good. Boy, I know exactly the stretch you are showing here. It was a regular pass by to get to the errands we had to do. I think I like the colorized version more, but maybe because that's how I remember West Wyomissing. Neat idea.

Great job on the colorization, and in getting these shots converted from B&W film into Photoshop. I like both these images, for slightly different reasons

On your alignment challenge... when I align layers in PS I initially set a few guidelines, move the 'active' layer to get close (align/scale/rotate as needed), then reduce the opacity to 50% and zoom in and nudge to align the key areas.

I never use auto-align as it just doesn't work for the type of subject I typically use (or perhaps I need to give it another go?)