I am a bit confused about what to expect when viewing a scene through the EVF and even the live view screen. When I experiment...and I deliberately and severely set A, S and ISO so that the image will be markedly underexposed, and then I view the composition through the EVF or the LV, I see a very well lit/nicely exposed view of my composition. Of course, if I capture that image with those settings, the image is black (as I said, markedly under exposed). I would really like the EVF and LV to better reflect the effects of the current exposure settings. I want to see in the EVF or LV screen what the image is going to look like when captured. If it's underexposed, then I should see an underexposed composition in the EVF, But I don't. Why is that and can I fix it?

I have set the EVF menu item I EVF Style to style 3 (no different if I choose style 1 or style 2). I have tried setting I EVF Adjust to auto or even to "manual" and chosen the lowest EVF luminance value available. However the problem persists. What I see in the EVF is not what I will see in the captured image.

Hi Chick,
You should normally be seeing exactly what the camera records, unless there was a setting change. You may want to do a reset to factory defaults if you don’t see any difference when turning off “live view boost”. All three of my E-M1 MkII’s work exactly as they should, so I’m not sure what else on yours has changed. Let me know if that works!

Hi, Chick. I have the same setup.

Are you a Facebook member? If so, you may find helpful the the Olympus OM-D Education Group (https://www.facebook.com/groups/OMD.education/?ref=nf_target&fref=nf).

There are loads of others.

We have seen a number of questions about what the EVF/LCD show lately, regarding under/over-exposure.
I have made this explanation of the P/A/S-Modes to maybe help out. Included is also a version of P-Mode that maybe is a new line of thinking to others than myself. (Text as plain text in comments)
(Kim Holst then had an info sheet graphic - it's attached. Here is a direct Facebook link: https://www.facebook.com/photo.php?fbid=10156934785988872&set=gm.2366060...)

Hope this is helpful. 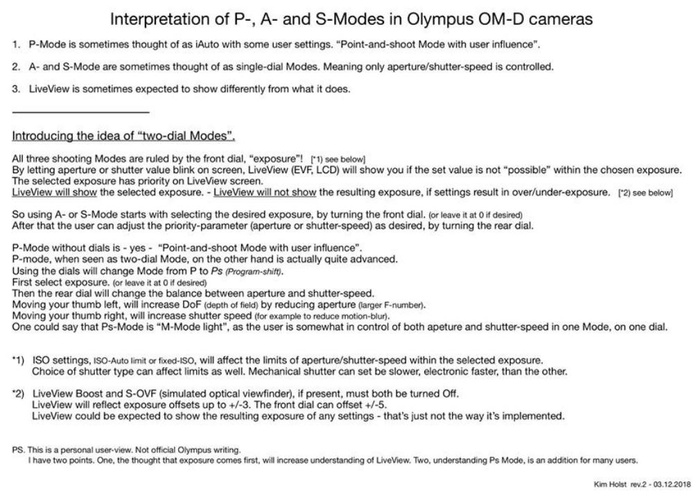