How to Be Inspired but Not Be a Thief

Being inspired is a part of creative expression in all mediums. We are all inspired by different people and things, but when are you no longer inspired and instead just stealing? There's a process to understanding how you should take inspiration and apply it to your own work. Once you find that line, you can be more comfortable in finding inspiration.

It's all about being able to take those elements you love the most, simplify them to their most minimal form, and apply them to your work.

What I love about this is the posing. If I were to be inspired by this, I wouldn't take this exact pose. I'd take the idea of creative posing and do something different.

The problem some people have is they're taking whole concepts, not elements of an idea. Some people will say: "I didn't steal the idea; I took the red hearts over the model's face and made them blue!" That's not enough. You need to be able to break a photo down to the incredibly specific elements and then understand how you can use those for yourself.

When you're breaking down elements, just keep saying: "why do I like this, why does this work, what makes this work" until you've broken down what is inspiring you to the smallest elements. It's kind of like when you're explaining things to a toddler and they just keep saying "why" to every response; just do this with a purpose.

Do you see what I did? I took a photo, saw what I liked, and found a way to break it down into my own work. Let's do it again.

It's official: 2020 is all about *thoughtfully* curating your piercings. For more eye (er, ear) candy, swipe thataway 👉 and to shop some of the best new styles (nope, not just your basic studs), hit the link in bio. 💎💥

Why do I love these? The composition. What does the composition do to the photo? It gives the photo a fun, candid look. What can I take from this? Be more candid in my posing and composition.

Take the Elements, but Not the Ideas 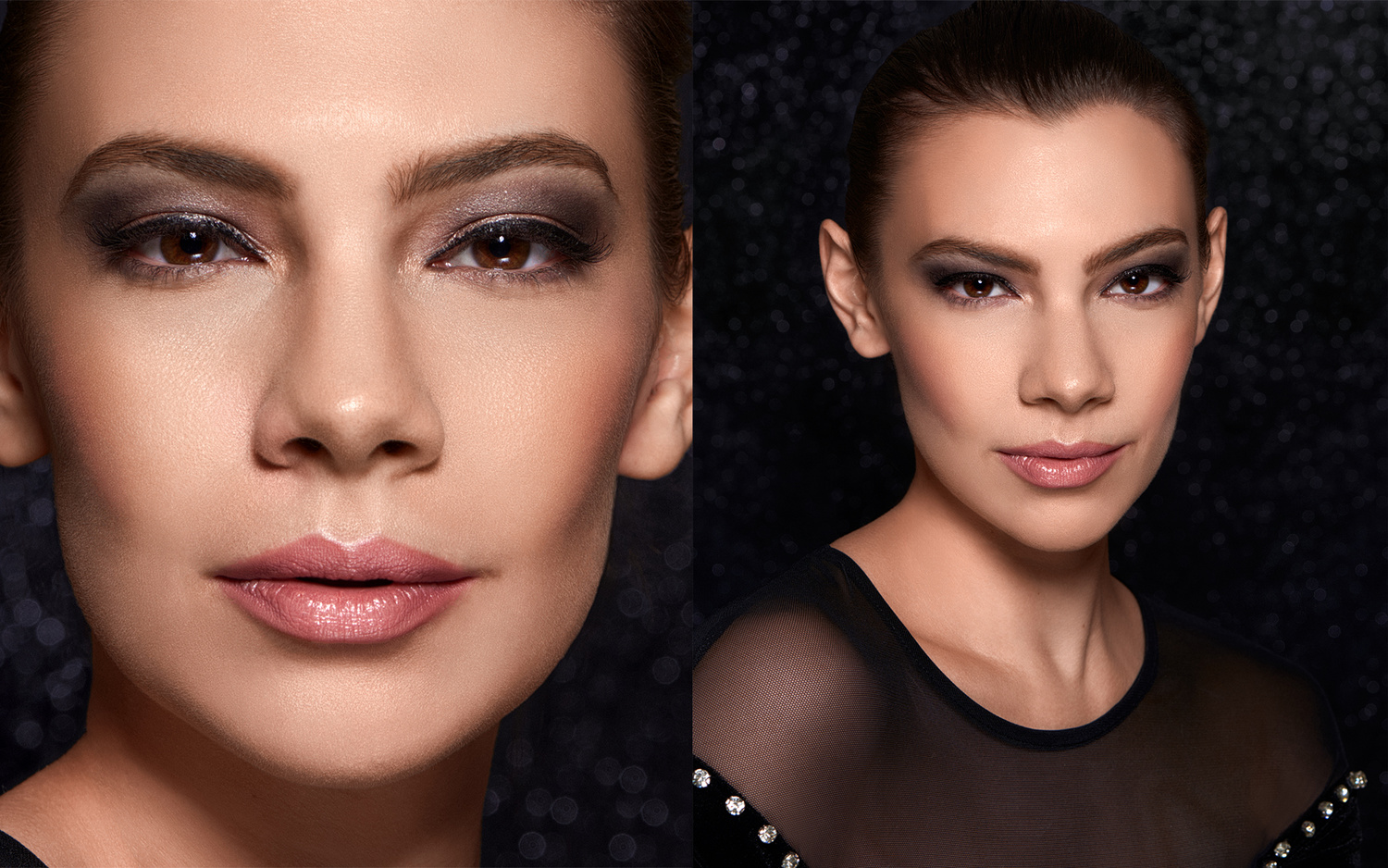 Here's how I took the inspiration from Aga's photo and used it for my work. I made the shimmery highlights more out of focus so they weren't as much of a focal point and had more of a starlight feel to them. Then, I had the makeup artist do more of a Hollywood red carpet look to make it more Los Angeles and match the idea I had before with matching La La Land. 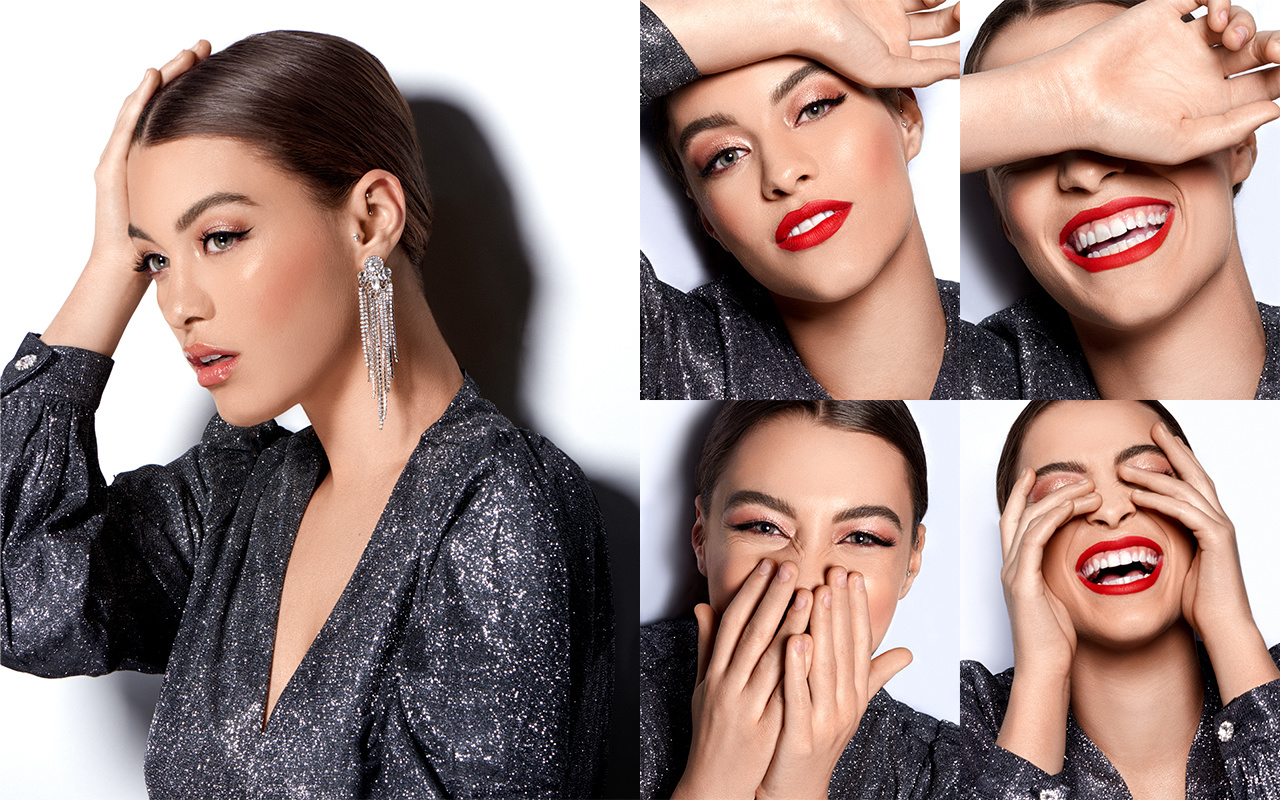 This is how I interpreted the Cosmopolitan look for my own. I love keeping it fun and candid, so I made that work in two different ways. In one, I made the photo look more behind the scenes, like the second camera in an interview. Then, I made a fun collage with posing and composition that felt more candid.

Understand That What You Like Will Never Be Yours

Some things are just so perfect, and you love every single element from them. That's totally fine; you just can't use them to re-make the work in your own way. It's basically impossible to do a lip drip photo and not make people think of Julia Kuzmenko and Vlada's work.

Accepting that you can't just recreate what someone else just did is very important. You just have to accept that what they did can't be yours, as cool as it might be. That doesn't mean you can't be inspired by it; you just can't own it. Taking the last example, maybe you use the concept of paint dripping for product photographs or conceptual food photography. You just can't copy what they did. You lost, you didn't do it first, move on.

When You Start Finding Your Footing, Stop Obsessing Over Other's Work

Something I learned from other creatives is that you get to a point where you have to stop consuming and start creating. You need to stop being a fan and start becoming a peer. The reason for this is by consuming so much, you start to rely on them for inspiration too much. Your ideas are no longer unique, you become too derivative of those you're watching.

A lot of comedians don't watch the specials of their friends. A lot of musicians don't listen to music in their own genre. It's all about trying to stay in your own lane and not being indirectly pushed into being derivative of those around you.

You Don't Own Basic Ideas

As a counter to this, you can't own basic ideas. No one owns the idea of a model placed close to a background or using a beige, painted background to make a portrait that looks like a renaissance painting. You can't own people writing words on the body or using hearts to cover the face. Some ideas are just too basic to own.

Let's Tie All This Up

Going back, it's all about dissecting what's important and knowing how to properly interpret that in your own work. When you learn on your own, no one is teaching you the rights and wrongs of working. You just have to figure it out for yourself. Hopefully with this, you can start properly applying what inspires you in your own work!

Excellent article, I wish there were more like this here. The temptation to "borrow" somebody else's ideas is always there and it is useful to come to one's own understanding as to how far is too far. I've heard another good rule - don't do what somebody else has done, unless you can do it much better than they did. Having said this....I have made the effort to assemble on my PC a sizeable collection of photos that I like, by a large number of fashion and fine art nude photographers, to see what has been done, and to get inspired. It was startling to see how much "borrowing" of concepts and looks is going on, e.g. younger generation copying concepts from earlier masters whose work has not been in the forefront for a while (see the debate on Ren Hang "borrowing" from Guy Bourdin, for example). In the end, the photographers who engage in this can be quite commercially successful (after all, there is demand for Avedon-style images out there, and no Richard Avedon anymore to make them....). Michael Gross says in one of his books of Steven Meisel: "The line between plagiarism and inspiration is fine, but it's a distinction with a difference in fashion where line-for-line knock-offs are the coin of the realm. Meisel was fashion's first advocate of sampling, the postmodern tool of choice". In the end, the most successful (and celebrated) photographers tend to produce an original body of work recognised as their style, in addition perhaps to a more generic body of commercial work, or take their inspiration from other genres, such as movies, paintings, sculpture, calligraphy, literature, folk art etc. This last approach has proven much more useful to me than looking at other people's photos. Plus reading books by, and interviews with, the rare people like David Hockney who are not only top artists themselves, but also have (and are willing to share) a deep understanding of how art has developed, how perspective works, etc.

Sweet jesus stop nuking the whites of peoples eyes to be whitewalker glowing triangles. People have color in the whites of their eyes, and blood vessels. Stop making them look like tglow in the dark radioactive milk.

Great article, David! Thanks a lot, I like the point about asking yourself why. The point about taking only the tiniest moments you like is also great but it can be rather hard. Sometimes it seems like you LOVE everything in the picture thus trying to copy it.
Also the phrase "You lost, you didn't do it first, move on" is not quite right because the chances that your work is completely unique are very-very small whatsoever. It's just that you don't always see that somebody had done it before.