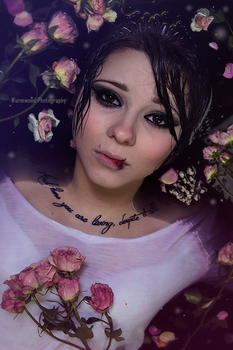 And here you are living, despite it all.

This is my take on a classic, the character Ophelia. Shakespeare created Ophelia as a character with great mental and emotional duress brought on by an unhealthy relationship. The famous painting, entitled Ophelia by John Everett Millais depicted Ophelia laying in water as she sings before drowning herself. Many other classic (and more modern) depictions of Ophelia revolve around this dark foreboding scene.
My version is very similar in style, with my own influences. I photographed this to symbolize the mental and emotional death one feels when at the end of an abusive relationship. That period of time where we are consumed with sadness, and the only way to move on is to kill the old versions of ourselves and leave the past behind. Rebirth, if you will.
The model in this photo's name is Glorious Joy, and her tattoo reads, "And here you are living, despite it all", an accidentally perfect tattoo for this concept.