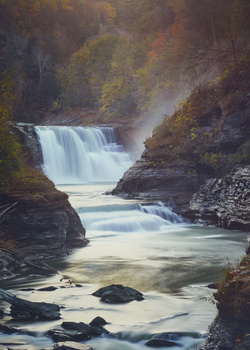 In 2017 Western New York had a miserably wet year. It hardly snowed the winter before and rained more in two months than was seen over the entirety of the previous year. Hardly a day went by without a downpour and flooding of local waterways. It was a mess of a year and the seasons just would not change on time. I got this shot at Letchworth State Park in late October. It was one of the last good days of sun expected for the year and days like this were few and far between that year.

Love the colors and the mood