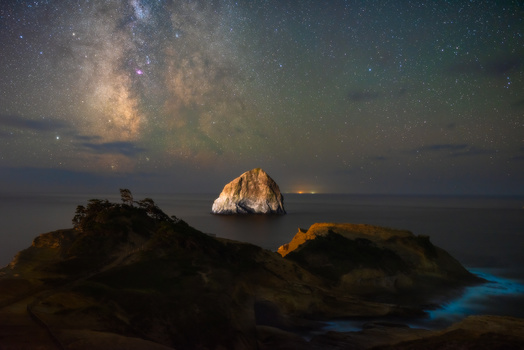 One of those nights where everything turned out better than I expected at the Oregon Coast. While shooting alongside my friend we saw several big meteors passing by including one monster of a green fireball that just passed outside of our frames and lit up the entire sky green! In addition to the meteors bioluminescence was making an appearance as it crashed along the high rocks of Cape Kiwanda emitting blue light. At one point someone turned on their high beams in the parking lot of Pelican Brewing which perfectly lit "Chief Kiwanda" and allowed me to blend in that frame in Photoshop.

Thank you Harry. Bioluminescence is so neat and I've been lucky to see it several times along the Oregon Coast.