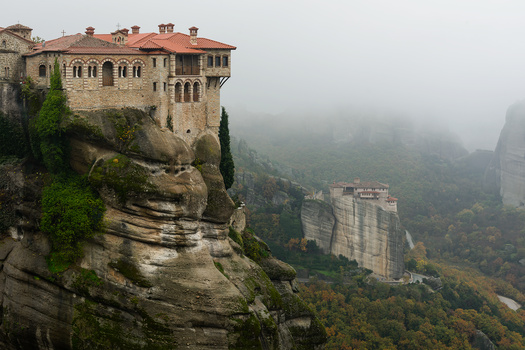 Praying side by side

It was 5:30am when me & my partner woke up, picked our equipment and headed for the hill above the Varlaam and Roussanou monasteries at the Meteora monastery complex in Kalabaka, Greece hoping to catch the first light of the day with some ground fog covering the ground which would make the meteora rock formations and the monasteries appear like they are above the clouds.
Sadly the weather had its own mind, it was partly cloudy, but the main issue was the excessive amount of fog, high fog not ground fog.
After several hours of waiting, finally at approx 4pm the fog gave way ( enough for us to be able to see & capture the monasteries ) and we were ready to capture some shots.

Ideally I'd like to have some ground fog beneath both rocks in this photo, but sadly, we have no control over nature, so it is what it is.
I'm satisfied with the way it turned out, but still looking forward to re-visiting the place hoping to capture it with ground fog.