This Is The Best Gift For a Photographer for Under $35

Having the right gear as a photographer can get quite expensive. We spend all our money on the camera and lenses only to find out later we need all kinds of other gadgets and gizmos to run our business. Often we invest in something that we use a few times and then it gets buried in our bag never to be touched again. As I was thinking about all the gear I have the one thing that came to mind as one of my most valuable was a gift from my wife and cost her just $35. Read on to find out what it is...

A couple years ago my wife knew that I was constantly having to buy new batteries for every shoot. I had rechargeable batteries but they never seemed to give me the same kind of life as just buying regular AA batteries. She did a bit of research and found a battery charger on Amazon that had some good reviews so she picked me one up for my birthday. Now most of us may think all battery chargers are created equal, however I have got to say that is far from the truth. The charger she picked up for me and which has been an absolute work horse for me the last couple years is the La Crosse Technology BC-700 which currently sells on Amazon for less than $35. 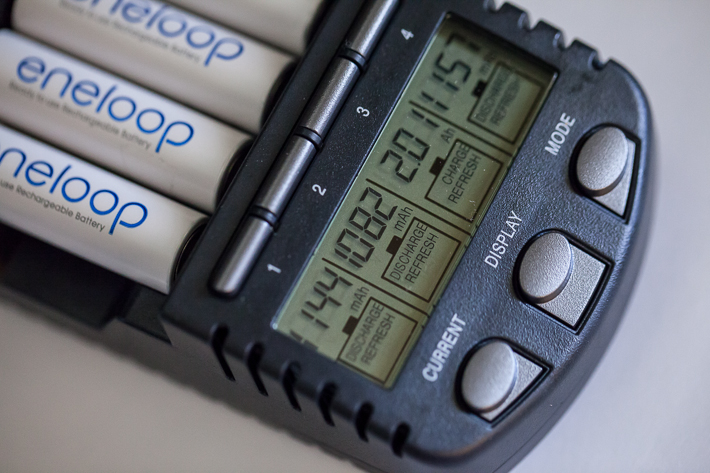 See the problem with most battery chargers is that they charge all the batteries at one time or sometimes do it in pairs. The issue is when one of those batteries hits a full charge then it turns the charge off, thereby leaving the other batteries falling short of a full charge. The BC-700 is different in that each battery is charged on a independent channel with it's own LCD display. The charger also has overheat detection to make sure that once your battery hits 100% charged it changes into a trickle mode to keep it charged fully without putting excessive wear on the battery. These two features alone insure that when you put four AA batteries into the charger each one will be individually taken care of and will all get the full charge.

and pop them into the charger and let it do it's thing. However, about once a quarter I will refresh my batteries thereby getting rid of any memory they are holding onto and in short turning them brand new again. This is done using the BC-700's REFRESH mode. A refresh starts with a discharge to determine the cell's remaining charge capacity, then it charges the cells back up and drain it down again to determine its new capacity. It will repeat this Charge/Discharge cycle multiple times until the capacity stops improving. Finally it charges the cell in the end. This process can take days. But once complete my batteries are refreshed holding onto no old memory loss and fully charged ready to roll.

Now don't get confused with all these different modes. 95% of the time I just pop in the batteries after a shoot and let them charge normally. However having the Test mode to check my batteries and the Refresh mode to make them new again is very useful and something not available on many chargers on the market. In addition to the different modes the charger also has different speeds of charging your batteries ranging from 200mA to 700mA. Most often I will let the charger default to 200mA but if I am in a time crunch I will change the mode to the faster charge thereby sacrificing a bit of quality on the charge for the speed to be able to use the batteries sooner. The company estimates that for a 2000mA battery it takes ~10hrs for a full charge at 200mA and ~3hrs at 700mA.

Over the last couple years this charger has been used week after week with no issues. It just simply does what it is suppose to. I have been so happy with it that I picked up a second one so I could have one in my camera bag at all times in case I need it on the job. When I jumped over to Amazon I was surprised to see that it now ranks as the #1 sold battery charger on the site. Actually I guess it doesn't really surprise me since I love the thing so much but I am just amazed that some of the larger companies haven't manufactured something similar that works just as good.

Founded in 1985, La Crosse Technology introduced the first radio-controlled clocks to the U.S. market in 1991 and continues to be on the cutting edge of new technology in America. Their consumer electronics products include radio-controlled clocks and watches, wireless weather stations, and power monitors. La Crosse has built themselves quite a following in the wireless weather stations and atomic clocks department. Hopefully now they will also be able to realize just how valuable their incredible battery chargers are for industries like ours that use batteries often. After all I would love to see one of these battery chargers come in a 8-cell, or even 12-cell model.

Now I would love to hear your thoughts. What is your favorite piece of gear you own and use often for less than $50?

I was not asked by La Crosse Technology to share this, nor was I paid or given any product for it. This is simply my review and me sharing something that has worked amazingly well for me and hopefully it will be useful for you as well. If so, spread the word!

Can't wait to try it!

I think you'll love it! I know I do mine.

You beat the hell out of my bank account again Trevor!

I love my LaCrosse charger. It does have a problem - if a cell is really dead, it won't begin the charge cycle. A minute or two in a cheap Eneloop charger and you can go back to the LaCrosse. I have also read of a solution where you can simply electrically connect it to the cell next to it with a coin and this will be enough to get it started. The non-dead cell signals the circuit with the dead cell to begin.

That is interesting. I have never encountered that issue. Is that with batteries that are dead and have been sitting dead for sometime? Or maybe those killed by the regular consumer chargers? Is it something that happens often to you or just has happened once before? Awesome tip Peter.

I've experienced the same problem with completely dead batteries. My solution: toss it on the el-cheapo Panasonic charger for 5-10 minutes, then back into the LaCrosse.
My LaCrosse came with four 2600 mAh AA batteries. From my experience, they SUCK. I've only been able to charge them to ~600 mAh using LaCrosse's Refresh mode.

Had this happen to me as well and I just stuck the super dead batteries in the freezer for 24 hours, then let them thaw for a couple hours, popped them on the charger and good to charge! I'd say the cheap Eneloop charger is a better method unless you don't have one.

in the uk it seem's this is the same thing..

get a maha... you have no clue whats good

Your choice of words cracks me up... I am sure the Maha is a great charger as well. But to tell me I have no clue is quite funny. I have been using this guy for a couple years now and I can definitely tell you it's a good one! I am sure your recommendation is a good one as well though.

For an 8-cell charger, I would check out the Powerex Maha MH-C801D.

I just realized how a lot of under $50 items add up to a lot of money.

Thanks Heath... that does look like a good one. If I didn't have two of the La Crosse ones that would have probably been a good choice. Thanks for the other suggestions as well - all great ones!

I've been using the MH-C801D for over to years and it is THE BOMB. I'm suure this La Crosse model is great, too, but I need to charge more than four batteries at a pop.

Trevor- thanks for the great article, though! This may be something to purchase, as you indicated, to throw in a gear bag.

I just bought this charger a few weeks ago and I also love it. I have lots of rechargeable batteries and it's nice to be able to check their health and restore them back to health when necessary.

Pierce... do not read. Thanks Trevor!

The absolute “top of the class” battery charger, is a charger from Ansmann:

Not under 50$, but does pretty much everything you describe + can charge 16 different
size batteries individually at the same time. For me having 4 flash guns, 6
radio triggers etc. , that is one extremely important feature on top of all the
other things that it does.

I heard that eneloop batteries are really good and I bought some from ebay. I used it once with my Canon Speedlight and now the battery is dead and don't recharge at all. Has this happened to anyone else?

You have to be careful with batteries as a lot of fake ones are out there.

Thanks for the response Trevor.

I think ebay was the problem, not the batteries.

Nope. I use both the Eneloop and the Eneloop xx batteries in my speedlight (XX provides faster recycle... at a cost). Never had a problem with either of them. I understand that there are some scams with regular batteries or knock off rechargeables being sold as Eneloop batteries on eBay. Hope that didn't happen to you.

I love the BC 700 as well. The BC 700 is available from many companies who just seem to rebrand it to their own label.
But the type of batteries is also important. Eneloop are really really great

The "7 Day Shop" does a great own brand 8 battery recharger that charges each battery on it's own circuit. Theirs also has the discharge option as well. Great thing is that it's really cheap! I can also recommend their own brand batteries as well.

If I get my sh*t together I'll be mounting a couple of these on a board so I can have a big bad charger bank.

They're doing maintenance right now so I can't link directly to the product but it's not hard to find in the section.