Actually we wanted to hike along the Grande Randonnée 5 from Thonos Les Bains to Les Houches. But we where out of the summer season ... again! And the refuges were already closes. So we decided to take a ride to Chamonix and do several trips from there instead. A beautiful little town with a breathtaking view to the Alps with Europe’s highest mountain the Mont Blanc.

With our first try to hike to Lac Blanc my buddy discovered a strange little hand crafted housing in a rock. The windows have been made of bottles and the door was build out of a slate plate. We wanted to spend the night in a tent right behind the strange tiny house.

Then I realized the back side of the house. Immediately I thought that would be a nice framing foreground for a night sky shot. ? So I spend another hour alone in the dark to capture stars. I was so excited because I have never seen such a beautiful night. But to be honest I was quiet reliefed when I finally did the last shot. Even when I had the best view and most clear night sky all I wanted was to go to the tent. My lungs where killing me this night and hurt so much. I think that pain was causing by the exhausting hike, the cold night and the little hangover I had from the night before :-9

Long story short a beautiful image is always worth the effort and sometimes pain! 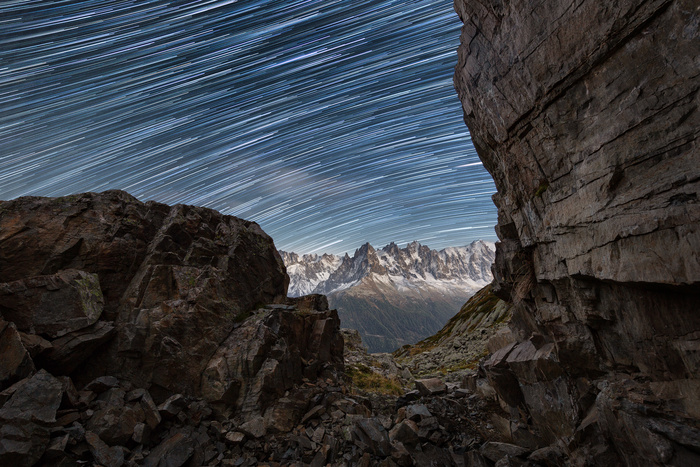 A great image but you got me all excited about the strange little house and I don't see it anywhere. Thanks for the story behind the pic.

I am glad you like it! Yeah that building seems to be very old abandon. Thank you Geoff!

Well worth the shot. I really like the star trails and especially the background. The rocks foreground is a bit too dominant for my taste.

Beautiful nature of mountains inspires me to return there again and again.) Thanks for this amazing photo.