Expose to the Right!

No, not a guide for exhibitionists!

For those wondering, here is an example of how "exposing to the right" (i.e. of the histogram) can give you plenty of leeway in post, and give a very different end result than what you see on the back of the camera, which can look flat and uninspiring.

Actually this image has plenty of leeway, so did not really need this as much as some, but illustrates this "overexposure" technique vividly. It can make all the difference when the scene lacks contrast. If you want to increase it in an image taken in such circumstances (and usually good processing involves some increase in contrast somewhere, especially in skies - which are much more unforgiving than this scene), you can rapidly get banding and other grunge, the risk being reduced if you ETTR.

I haven't exposed further "to the right" because those tiny white shells would max out to bleached white dots if I had, not that you can see at the resolution available here, but you could in an A2 print. 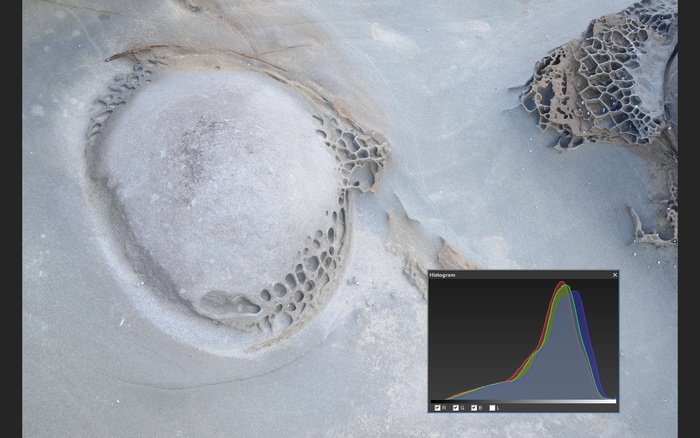 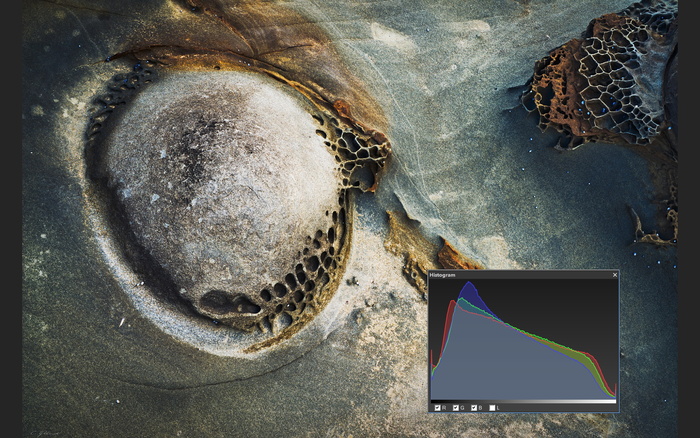 Great tutorial. Thanks! Maybe for example sake could you show 2 sets of the same shot: 1 with the ETTR concept, and one ETTL to demonstrate the banding you mentioned? I have a bad habit of underexposing so this is great. Until 4 years ago I shot portrait, wedding and senior photography so had some income to buy all the toys. I have since trimmed the fat in my toy cabinet so am struggling with exposures not having a monitor calibrator. I have my screen WAY too bright most of the time and find myself ignoring the histogram (I know, shame shame).

I have been thinking of images that illustrate this issue. I'll try to find some suitable ones for another post.

I'm not sure Brian, although I think the haloes are not related to this, but rather to what the software does to fiddle contrast, which involves exaggerating differences across boundaries. Or something...

Hey Chris, isn't there something up with your histograms? If you increase exposure the character/shape of the curve should be maintained but just slide to the right, correct?
The 2nd image almost looks like contrast/other manipulations added.

Personally i try to keep the histogram from bumping either end, and if the dynamic range is too great (and the composition worthwhile) will take 2 or more images to ensure I have al the data.

From a technical standpoint my understanding is that as long as you stay in-between to boundaries you have the data and it can be manipulated.

Intriguing stuff and a great discussion. I am very interested in the technical side and may be totally wrong on this so let me know your thoughts.

That was my understanding also. If it's not clipped, it's there to use.

Apologies to all! I should've been clearer, Alan. The second image IS massively manipulated. I mainly wanted to show that the bland ETTR original can be a good place to start, despite appearances; the second image is just the way I wanted it, along with several variants I haven't posted.

Regarding your technical point, my understanding is different. If the image has a narrow dynamic range (i.e. occupies only a portion of the histogram), like Ruth's lilies, then ETTR can make a big difference and make it easier - or even just possible - to come up with a satisfactory edit.

The original file here was made in very flat light, of a fairly low-contrast subject, and still barely makes it in with no clipping at either end. Frequently, we have to accept some clipping, and then... it becomes confusing, because it's better to allow clipping at the dark end, "exposing to the left".

So the guideline is more like: "Expose to the right as far as possible while avoiding highlight clipping", which is what I did here. I deleted some exposures that showed no clipping on the "blinkies" but where those shells were maxed out, but falied to show up on the camera because they're so small.

Hey Chris, I have researched this to death and fail to be convinced.

I have spent a large number of years in the electronics industry working on many systems that incorporate similar components (ie analog sensors, A/D conversion).The theory of ETTR maximizing shadow detail does not make logical sense to me.

My personal feeling is that the ONLY way this makes sense is if ETTR is the result of getting more light on the sensor (more light/wider aperture) to increase the signal/noise ratio.In that respect this is basically following best practices anyway.

I also feel that even if true when published (in 2003) technology has come a long way since that time and if a valuable tool camera/software manufactures would have addressed by now.

If anyone is interested in my own technical perspective you can check out my blog entry on my website.

I'd love to hear from anyone that feels they have a different understanding and perhaps has tested this theory with success. I am more than will to hold my hands up if anyone can point out what I'm missing.

So are you saying there is more recovery if you expose as right as possible without hitting white? The common saying ive heard with exposure is that your recovery is generally better if you underexpose, not overexpose. I find that in aperture/shutter mode my camera is pretty darn good at exposing correctly most of the time.

To be honest, Francisco, I have followed the ETTR principle as you summarise it at the start, on the advice of others. While relatively new to digital, I heeded the advice of those with experience. However, Alan has raised doubts in my mind, as I've never really tested out ETTR vs ETTL. I hope to do so soon, and to post the results.

Popular advice can be wrong! And you've obviously heard different.

One can often bring out a lot of detail in what look like hopelessly dark shadows in RAW, while in general blown-out highlights are the death knell for an image, unless they're tiny points. Hence it's important not to overexpose. But in a low-contrast scene, where there is exposure latitude... I don't know. Yet.

yeah it seems like there is no absolute answer so logically it probably depends on the scenario. I think recovery is so good on these new cameras that as long as ur in the ballpark it doesnt really matter that much.

I wonder why these new cameras aren't smart enough to do hdr style exposure (exposing for foreground and background) like the iphone does. I'm assuming you are somehow losing quality information doing both at once instead of bracketing, but i dont really know.

When do you usually bracket Joseph? I usually only find it useful for something like a moon shot when its pitch dark and the moon is blown out with a regular exposure.

Every shot worth taking it's merely a backup plan or a fail safe i do have to admit i barely use all 3 but if i need it its there.

U must eat up hard drive space like nobody's business haha.

I totally agree Joe - do all you can to capture the entire tonal range.

Hey Francisco, do you have details on this? The only way I can see this working is if it is through some software manipulation or the camera actually brackets and merges exposures.

Alan here is my best example of what i think is being spoken of as far as detail retention. I took 3 different exposures. 1 for light/bright details underexposed, 1 properly exposed to work from and 1 overexposed or ETTR to account for the shadow details 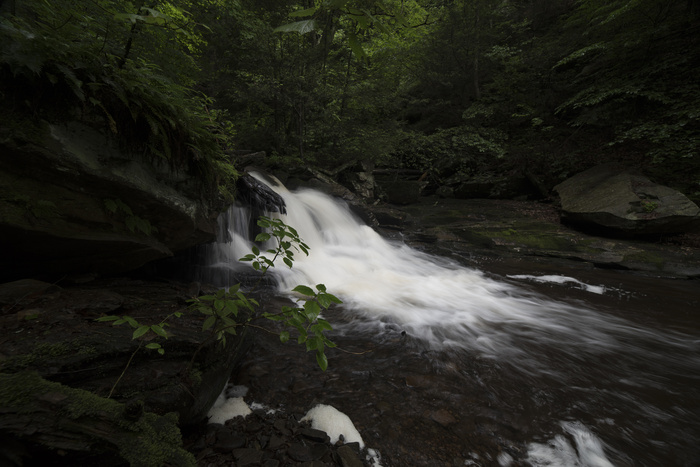 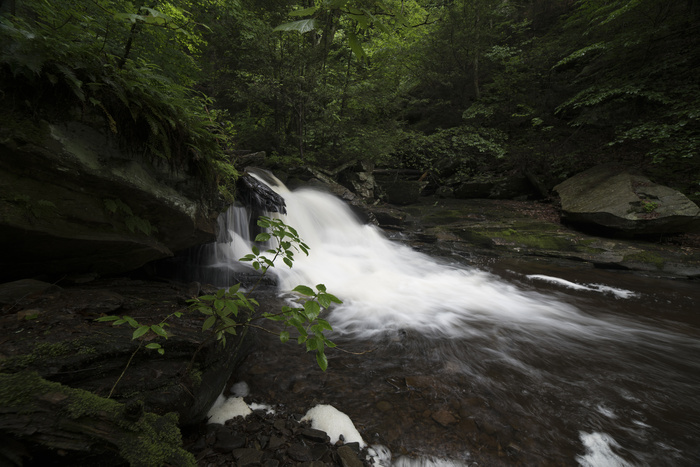 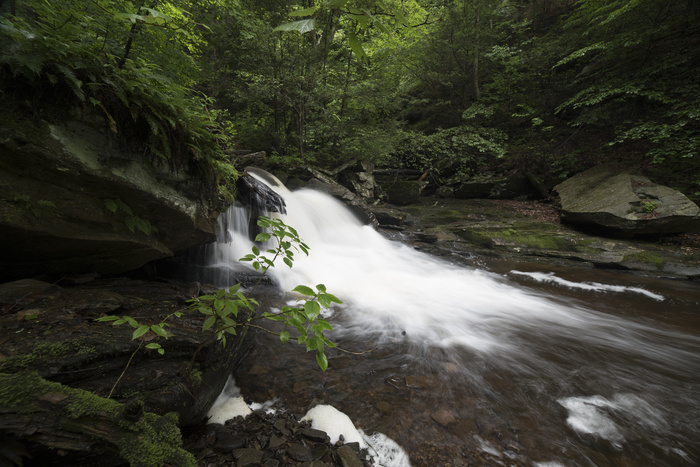 Thanks Joe. I fully agree that multiple exposures can and should be used to ensure the full range of data is available.

ETTR implies that you already have the full range (ie blacks not clipped) and that by exposing to the right will improve shadow detail.

I think bracketing to gain shadow detail is another subject, although I suppose this could loosely be classified as ETTR (and in that case under-exposing to preserve highlights ETTL).

As I indicated earlier I think the goal should be to ensure the entire tonal range is captured, whether in one or multiple exposures.

The basic ETTR principle was born out of the idea that more A/D channels are assigned to brighter areas, hence the logic to increase exposure and bring back down in software. This makes no logical sense to me and I've yet to find supporting evidence.

I see now what your getting at

Hi Alan, I believe iphone HDR simply takes 3 exposures as quickly as possible and then tries to combine them as optimally as apples algorithm allows. As you can imagine its not perfect, but when it exposes correctly its pretty neat.

I just read up on the latest 'smart hdr' that the newest iphone has. It can blend 9 exposures at once.

Thanks Francisco, I'll have to read up on that. So no magic, just taking the photographer out of the picture, so to speak.... ;-)