Got MBA yet? =)
Security came by while I was taking pictures with tripod. They said I'd need permission from Harvard as they have all the buildings' views/designs licensed or something weird like that. Is that true? 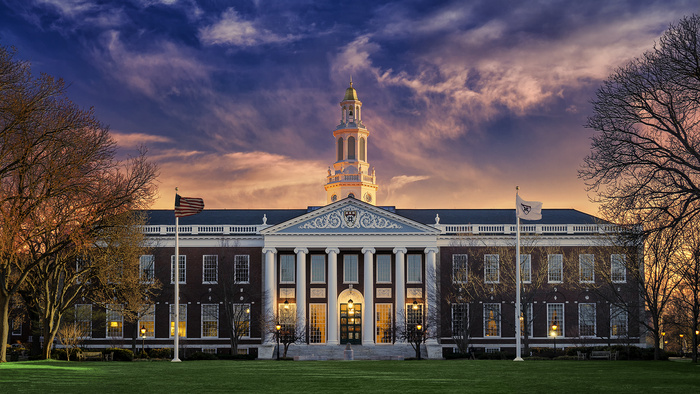 But if i don't sell it, I'm free to post it anywhere, right?
I did my best to align the roof, might have missed something.

Great shot here, but it's a little over saturated in the blues and yellows for my taste. Try dialing back some of that saturation and see what you think.

I think you are correct about the usage, and also your horizon is fine. Looks like there is a hill there so the grass isn't perfectly straight, but that's just a natural feature.

Adam, agreed on overcooking a bit.
Thank you for your opinion! Noted and much appreciated!

The whole thing feels off because of that hill in front. It makes the picture feel crooked even though the building is straight.

Matthijs...Since this is located in the US then the building does not have copyright protection. Sure, the architect owns the copyright to the design/blueprints of the building but the physical structure does not. This is pretty much spelled out in Para 120, U.S. Copyright Law.

Thank you! I actually had some trouble finding the right attorney to speak to about this. I'll look into that. Much appreciated!!

Re: Copyright. In Australia, although a building is protected by copyright, a special exception in the Copyright Act allows buildings to be photographed without permission. If you are taking the image from a public place, then there is no legal authority that can prevent you from doing so. That said, discretion is the better part of valour - no point in putting you or your equipment at risk if a burly but uninformed security guard asks you to desist.

I don't know. I know about a building in Belgium you can't even shoot w/o a permit. But if you post to like 500px of EyeEm, you can get in trouble because on those sits you can sell the image

Good to know, thank you very much! I'll consult with the lawyer at some point, just in case. Curious.

Hi Stas St, I believe the reason they gave you for why you can't shoot is incorrect, but they have the right to prevent you from shooting on campus, or even being on campus. It is private property of a private university. Not too different than shooting inside an office park.

However, if you photographed this building from across the Charles River, on the Cambridge side, that would be OK in my understanding of the law. If you stand in a public place you can shoot any building you see (however, not into the building specifically, like using a telephoto lens to see into a specific office). You can photograph the capitol building on Beacon Hill if you shoot from the sidewalk, but you cannot enter the gates and walk around the capitol's lawn and shoot it from there (without permission). Police may give you flack for even shooting from the sidewalk, but I believe legally you can do it (I've read you can legally photograph the Pentagon, but chances are you'll be questioned and/or prevented unless perhaps you have a lawyer with you who knows the law very closely.)

I hope this helps! It is very frustrating to have security/police disrupt your shooting. Often they are either given orders to, or simply assume that a photographer can't shoot or use a tripod in a given place. I've run into this photographing in Manhattan and talked my way into continuing to shoot (according to the mayor's office of film/media production you can use a tripod in a public place if you're not obstructing pedestrians), whereas in Boston's Seaport District you can't necessarily use a tripod to shoot commercially since it's not public land, but rather owned by MassPort (same semi-governmental agency that owns the land under the airport). It's quasi-public and is patrolled by homeland security, not the police... they've stopped me before. However if it's non-commercial shooting, just taking pictures of buildings, it may be permissible. No matter the legality, it sure is frustrating!

Ok so it's a problem when a guy is with a tripod but no one seems to bother if someone is taking snapshots with iPhones. Strange. If they're so against that then they could search for the building on Instagram and see how many people they have missed!

It is private property. That permits them to exert control over the photographers they suspect of making commercial images.

I always get permission before shooting and my contract insists that all permissions have been secured.

The landmark decision in this context involves photos an independent photographer took of the Rock and Roll Hall of Fame. In that decision the court said that the photographs did not infringe on the trademark of the building. You might want to familiarize yourself with that decision. https://openscholarship.wustl.edu/cgi/viewcontent.cgi?article=1517&conte...

Of course that only addresses the trademark issue, and not the issue of going onto private property to take photos.