I was shooting some birds during golden hour and walked into a heavily wooded path which had very poor light. I was pretty much done with shooting and then I saw a monarch butterfly landing on various branches, some of which were catching rays of light. I took this shot. I really like the image but technically it isn't great. The camera settings were (Nikon D5600, ISO 1250, F/6.3, shutter 1/1000, Sigma 150-600, manual mode).

It is killing me that I couldn't rescue the image. Questions as follows:

1. What settings would you have used in this situation?
2. Would a modern full frame camera, with the correct settings, given me a better image?
3. How would you process this in post?

Thanks for your help. 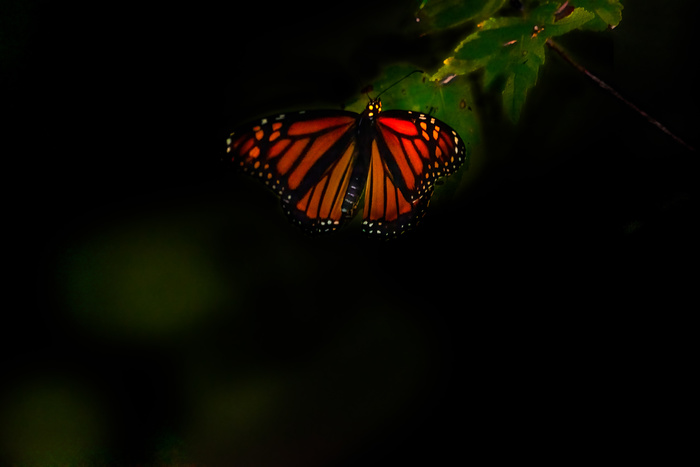 1) I owned a d5500 and your settings sound about right if i am remembering correctly; I wouldn't go any higher then 1250 iso, maybe 1600 max on that camera (even using denoise software). With the butterfly resting a slower shutter could have helped in reducing the iso further; maybe around 1/500s, or even 1/320th.

2) A modern mirrorless would help as you can see exposure before taking the photo which dose help immensely. If you could find a used or refabbed Z50, you'd retain the crop factor. I'd also suggest a d500 but they are still quite costly.

3) If you'd like, if you may, post the original in JPG here and if you don't mind I'd give it a go on how I'd edit it - just for spreading ideas and thought.

Thanks Joe. Anything over 1000 on this camera is challenging for sure. Here is the original file as a JPG. If you are able to rescue this photo then it would be awesome if you could let me know how you did it! I think I'm going to save up for a mirrorless camera... 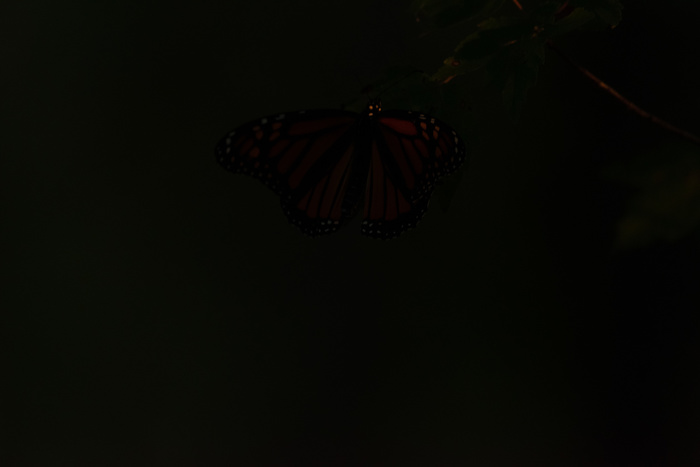 Marcus, I'm sorry I couldn't do better but I pushed-and-pulled it the best I could - as you know there is very little information to work with. It might be ideal to work this photo into a more creative edit.

I did lightroom basic auto adjustments > denoise > luminar ai > denoise again > luminar ai again > then just added a bit of noise back in within photoshop. The way this image looks is just a combination of very under exposed resulting in low dynamic range and details.

Yeah this is a tough one; I see what you're talking about now. 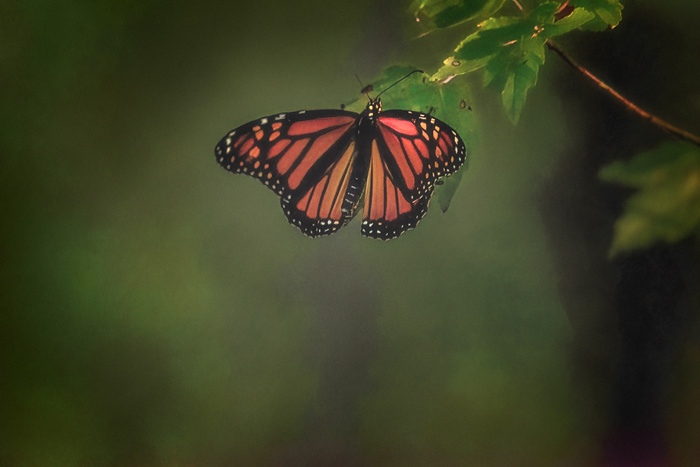 Joe, thanks for your edit...it looks great! That being said, I think there simply wasn't enough information in the file to do anything further. I was hoping that the post processing SW (Photoshop/Topaz) would help me avoid the expense of a new camera but I think I need a piece of HW that is more forgiving.

Are you using Luminar AI in place of PS? How do you like it?

I use both, my flow is Lightroom into -> Photoshop then use Photoshop as my hub for filters and 3rd party software. I use Topaz as well. Luminar Neo is a few months out with a big pre-order discount going on at the moment.

I'm now vested into the Z system but any modern Nikon (or other brand) are really impressive; not bulletproof mind you but they are very forgiving. I'm only talking Nikon as that seems to be what we are both using and have lenses for. Just pre-ordered the 40mm f/2 Z lens today. :)

The d5600/d5500 are good cameras... When you know it is time to upgrade is when you feel you are being limited by your current body. Sounds like you might be there for better or worst. Nikon site takes trade-ins of old cameras sometimes to reduce the cost of a new camera. Might be worth looking into.

Very low light wildlife photography will be demanding on any camera though (without using, say, a flash). They do make flash boosters (basically lenses for flashes) to extend the flash range to 500mm or more.

If thinking about a tripod, maybe a monopod with a gimbal head. I should actually do this myself.

Also. When using auto-iso and everything else in manual, I set my exposure compensation to -1. This keeps the highlights from being blown out no matter what metering is being used. Shooting a little dark is fine when shooting raw.

I like it....I think maybe you should just lighten the background, when lightroom by using the gradient dial and putting the circle around the butterfly then transverse it then lighten the leave... and leave the butterfly the way you have it now...OR take the green and blacken that out...

I got one of a bug while walking a trail and this bug just stayed hovering...so I took a shot....it isn't the best but I like it...

Thanks for the suggestions, I tried several different approaches and I guess I either need to improve my technique, camera, or both.

I saw your bug photo and it is pretty cool.

What exactly do you mean when you say that you had to "rescue" the image?

My experience is that people use this word to describe their pictures when the images are poorly exposed and need to be heavily manipulated to make them presentable.

To me, the image still appears to be a little dark, so I am assuming that you had to lighten it up quite a bit.

As Joe mentioned, if the butterfly wasn't moving, you could have used a slower shutter speed. I'm guessing that you decided to use a shutter speed of 1/1000th because either there was some movement on the part of the subject (the butterfly or the branch it was resting on) or you were hand-holding your camera and lens.

If there wasn't any subject movement which required a high shutter speed I'd suggest using a tripod. This would allow you to slow your shutter speed down and possibly even reduce your ISO.

Another option is to use flash, light painting or a combination of both. Most people would tell you NOT to use flash or any artificial lighting, but if you learn how to light properly, you can capture things that available light photographers could only dream of getting. Contrary to popular belief, it's possible to mimic the beauty of natural light. If you look at the work of Nikon Ambassador Dave Black, you'll see what I mean.

IMHO, you shouldn't be afraid to experiment and push your ISO up to get a good exposure. What one person finds acceptable will be different than another, so it's a good idea to experiment to figure out what will work for you in different situations. Just remember that the higher the ISO setting, the more accurate you have to be with your exposure as the amount of dynamic range and exposure latitude you have will grow smaller the higher you go. Keep in mind that it's also better to have an image which may have some defects than none at all, so don't pass on something really great because you believe that the results will be too noisy.

The amount of noise your camera produces will vary from situation to situation, so don't lock yourself in by placing rules on your shooting like limiting your ISO to a relatively low number like 1250. For example, in bright sunlight, there is very little change in noise performance between low ISO and high ISO settings. The beauty of digital is that unlike the days of film, you can often have your cake and eat it to. Need a high shutter speed AND a small aperture for greater depth of field? In bright sunlight that's possible. Yesterday I bumped up my ISO to 800 in bright sunlight because I needed a shutter speed of 1/4000th and a small aperture of f/8. The images were absolutely gorgeous.

As far as a full frame cameras are concerned, if the camera is of the same generation, as a general rule they'll produce less noise and retain more detail than APS-C cameras like your D5600. However, today's APS-C cameras produce images with much higher technical image quality and less noise than yesterday's full frame cameras which we used to rave about. For example, the Nikon D500 APS-C camera bodies I use today produce less noise and better color over a wider range of situations than the top-of-the-line D3 pro bodies I used to carry.

Another thing to consider is that given the size of your subject a full frame camera might not necessarily a technically better image even if it's a current model. Using the same lens, a camera with an APS-C sized sensor would allow you to shoot tighter while maintaining greater distance from your subject. This can often be important when shooting wildlife where you might scare off the subject or in situations where you might be using artificial light and don't want to block the light source. From the same working distance, using the same lens you'd have to crop if you were using a full frame camera, reducing the file size and resolution of the image.

I hope you find this helpful.

Ken, thank you for your detailed response! Yes, by rescue I meant trying to make a presentable image from a poorly exposed file.

I used a high shutter speed because I was shooting with a telephoto on a crop sensor ( I believe it was 600mm X 1.5 = an effective focal length of 900mm)...I was shooting at a fast shutter to avoid camera shake...I need to start using a tripod.

Using a flash would have probably been a good move...honestly the butterfly caught me by surprise and I wasn't ready.

I've used auto ISO in the past and it didn't work out very well...but that was before I got Topaz Denoise which is really quite good. I think I'll enable the auto ISO again and push the Denoise SW to see what it can do.

Once again, I appreciate your advice and I'm planning to play around with different options to see if I can increase my keep rate.

Maybe I'm a little late to the party, but I thought I'd add my edit to the mix. I used Affinity Photo, and the resulting JPG should be included. I raised exposure by a full 5 stops, and put a Gaussian blur on everything except the butterfly. That smoothed out the banding in the background (which really shouldn't be considered "noise" but rather the result of exposing way, way to the left). I used a Curves adjustment on just the butterfly to add saturation and contrast, and finished off with a hint of sharpening. 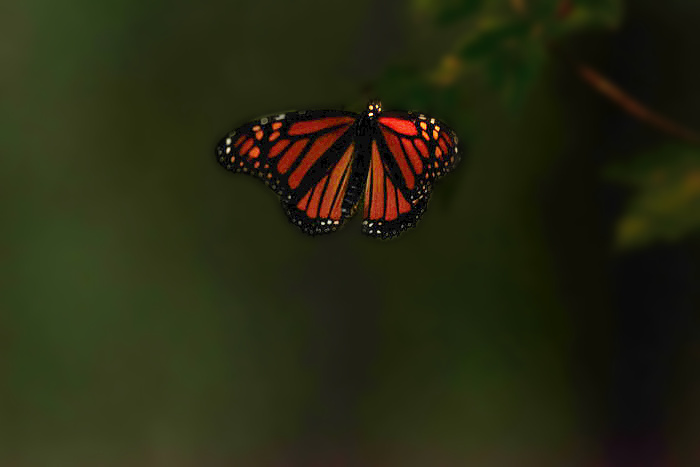