Many discussions have arisen recently about the opportunity for photographic art to transfer to modernity and get rid of the traditional character that contributed to the elimination of the pleasure of the captured photographers due to many causes, including the contagion of the hypothetical and accidental repetition of some the artworks, the imitation of some ideas, and the lack of time to implement and to start working on a real project deserves to wait for it till it end, at the era of time dominated by social media networking sites, which lead to lose the true artistic evaluation of the photographs, between the real and illusory likes based on the artists that we prefer or not, which created the need for development in these artworks to transfer them to the era of modernity, so it becomes the new evaluation chapter into the photographic path.

The interpretation does not differ much in understanding the meaning of modern art, in short it means rebellion against ancient art and the search for renewal. This renewal became the desired goal for some photographers recently, but who will dare to jump into the sea of modernity to challenge the hurricanes of the classical thought to break the stereotypes followed by the artworks presented by the majority of the photographers!? Indeed, it is more like an impossible or suicidal task that may force the artistic endowment to may lose his/her artistic credit in a place of the public's ignorance of the essence of modernity. Yet there are still simple attempts or ways which some photographers can slightly deceive to dye their artworks with modernity, between adding a kind of digital editing or manipulation to their works or between injecting some of surrounding elements to break the classic rules that involved in executing the normal artworks, or to sail away with the abstraction school!.

While In the midst of the search for modernity, the classic image remains present strongly and specifically the realism of it, after its return to the top of the photographic scene, especially with its distinct and remarkable presence in the atmosphere of international competitions, after its liberation and recovery from the artistic stagnation affected by the inoculation of modernity with it sometimes, and at other times by stripping it of its artistic value and contenting itself with its documentary name, which made it lose its importance due of the bankruptcy of our artist knowledge by translating the meaning of the correct documentation style, which explains the preservation of the essence and origin of the subject with it in its nature without tampering with it, or even without the need to list many grammatical details, which may be written and composed in a desperate attempt by the photographer himself in order to revive that work in any way, even if that story completely contradicts the time of capturing that artwork and the essence of its events.

Recently, the Sony awards 2019 competition witnessed a strong control of realistic works, which were carefully selected and balanced, as most of the winning works were mixed with two main pigments that were mixed with the concept of the modern and documentary school with an elaborate direction, which made the winning and selected works simple to understand and quick to read to the viewer's eyes, which reminded us of those works that We used to see it for masters of beautiful classical art such as Henri Cartier, Fan Ho, Ernst Haas, Joseph Kudelka, and Robert Capa. In an unfamiliar scene for Sony competition in this version, it clearly announced the victory of realistic images and in a large way, even those that brought the axes of nature did not go very far from it realistic surroundings, so the photos were accepted as they are, as if the jury decided in this version to honor the realist school to the greatest extent.

Undoubtedly, many fans of the realistic picture are very pleased with the return of the beautiful spirit to the essence of the real photograph, especially for those who prefer to see their artwork in its natural realism without being affected by the editing and processing programs, but rather see it as the correct measure to evaluate the efficiency and experiences of the real photographer in his success by employing his personal experience, his background culture, and his beautiful eye to capture a beautiful artwork. As the scale here will be equal with everyone without exception, especially with those people who are not good at dealing with editing and processing programs. I may share their joy as well, but as an artist who loves the beautiful images, I will remain confused between the comparison in inclination to any side I should choose? If I am looking for the skills, then my choice will be for the real school, and if I am looking for the artistic aesthetic then I will definitely lean towards the modern school, that is the difficult equation for me in preferring to choose any of these two schools!

Finally, the real lesson for evaluating the level of a successful photographer in my opinion, is his/her success to continuously breaking the repeating that he/she presents with his/her works, and forcing others to follow him/her and imitate his/her artworks continuously. 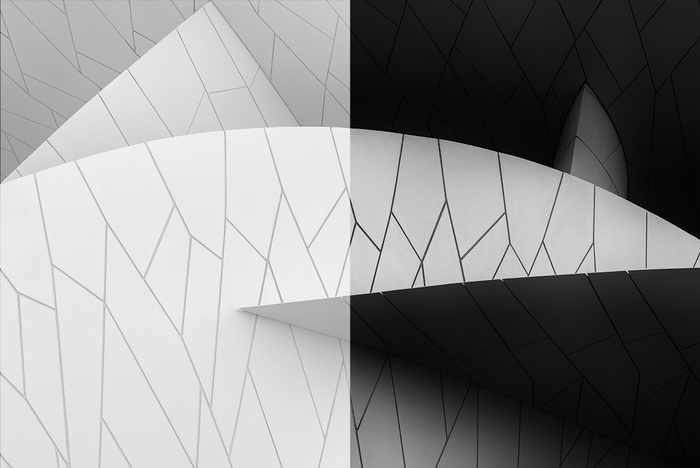