In the middle of a week-long, sub-zero arctic blast, the ice was really closing in on the water on the Gunnison River. I spotted this icy slushy wheel, slowly turning from the current from the opposite side of the river and knew I had to get closer for a shot. I made my way over a bridge and out on to the ice, using my local knowledge to stay over only shallow water in case I go through. I took a few shots and turned around to see a couple of police cars with lights flashing who had been called by concerned motorist. We chatted a bit but no laws were being broken so they went on their way and I finished up and headed home uneventfully. 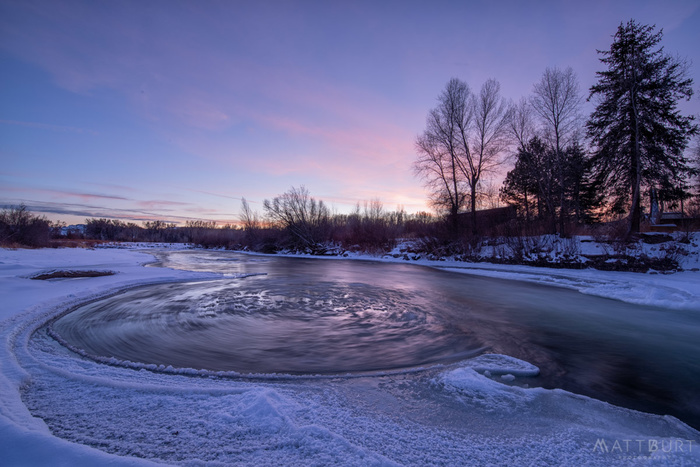 Nice photo of a Phenomenon I have never seen. I find it interesting that the wheel has moved around, leaving the rings of former locations.

Thanks! From what I have observed, the right shaped eddy will help them form, of course with sufficient cold. It was -28 F here that morning. But they don't move around much, they just form partially in multiple places when conditions are right. Those circular lines on the ice are like growth rings as the circle is getting smaller as the ice grows.