One photographer has been left disgruntled watching "Stranger Things" after recognizing what he believes to be one of his own storm photos – taken and used without permission – for the show’s concept art.

Despite noticing similarities between his photo and the dark storm cloud that appears within the show itself, photographer Sean R. Heavey says he brushed it off – until a friend was watching the behind-the-scenes episode, “Beyond Stranger Things,” which shows a still of the show’s concept art.

The still displayed during the episode seemed to resemble Heavey’s storm picture a little too closely for his liking. Entitled "The Mothership," Heavey’s site details that the image was taken of a supercell thunderstorm sweeping across Montana’s prairie at sunset. The final result is a panoramic comprised of four separate images.

Speaking to PetaPixel, he said:

Netflix did not get permission from me. I don’t have the image with any stock agencies so unless they got it from somewhere else, which is an issue if so, then they are using it without permission.

Heavey has since reached out to Netflix – and was apparently told that because “[the] law does not protect objects as they appear in nature,” his image cannot be copyrighted. Heavey quotes Netflix as stating that “the only similarity that exists is the use of a similar cloud formation… [and so that means] an artist can’t claim a monopoly over real-world public domain objects such as a cloud formation.” He adds, “The problem with that argument is that it’s not a similar cloud they use — it’s my cloud photo.” He is currently working with his legal team to formulate a plan, and in the meantime has taken to Facebook to express his displeasure.

This is not the first time Netflix has been confronted for copyright theft. Photographer Gough Lui last year launched (and won) a legal case after discovering a photo he took of a VHS case has been used as the box art for the Stranger Things disc set.

That looks a LOT like Sean's photo, to the point that details of the clouds appear identical.

It's a shame that companies such as NetFlix would even do such a thing. With all the money they make they could have saved themselves the embarrassment and shame by settling out of court. They know they stole it and that is all there is to this. Then try to throw BS into the mix. Take their butts to court.

They have no problem going after those who share their episodes on Kodi and other medium. This kind of cynicism and sense of entitlement is, unfortunately, rampant among corporations here.

It's the same clouds! 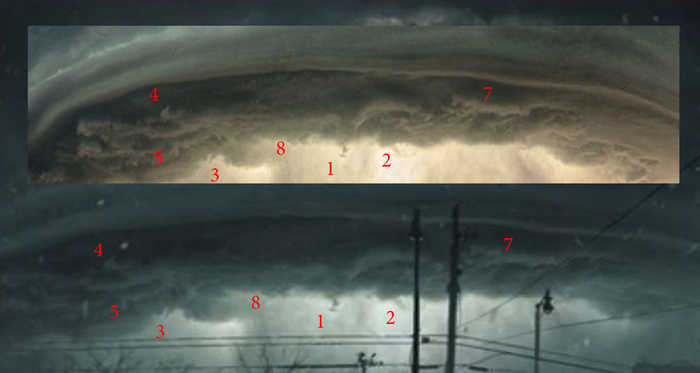 There are a LOT of similarities. Putting the two over each other and dropping opacity reveals a lot, I reckon.

The excuse they used is complete bullshit. They would be better off making the argument that it was used for concept (which happens all the time) for reference and not for a final production. Also isn't there like a 20% rule that if you change the work at least 20% or something then its fare use? I don't know.

No there is no such thing as a 20% rule. Title 17 of the U.S. Code states the right of derivatives. If the original work is altered in any way, your original expression is still protected under US Copyright Law. Creating any derivative work from any copyrighted work is still copyright infringement. This is clearly a copyright infringement and truly a shame that a company like Netflix with a budget of millions if not billions of dollars simply didn't license this image the right way. It's up to us as photographers & creators to register our work and truly stand up for our rights as artists.

Even if this was production art and not to be seen by the public?

If it weren't seen by the public in some way shape or form, I guess nobody would ever know about it. I was under the assumption that this was made public in some and being used to promote the show. That said, I don't know all of the logistics behind what happened here and I'm not a lawyer, but it looks like they used this photographer's image without his explicit permission. And in doing so, that sounds like a copyright infringement to me.

I really do appreaciate the commenters here on Fstoppers more than Petapixel. A lot of people there are defending Netflix...

Are there similar cloud formations? Sure. But this is clearly an exact copy of Sean's work. It would be the same issue if Netflix had stolen it from National Geographic. In either event, Netflix should have properly licensed the image to begin with.

Did you reply to the right comment? I'm on the photographers side.

Hey Kang, Yeah, looks something got messed up when I posted the comment... Not sure what happened there. Weird. Sorry about that

You may not be able to Copyright something that occurs in nature but you can certainly Copyright an image you captured of it. I hope that Sean registered his work because that can only reinforce his case and increase a settlement.

I used to work in advertising. What you need to understand is that Netflix probably had nothing to do with the concept art. They most likely outsourced the marketing to Stranger Things to some agency, where some low-ranking graphic designer was tasked with assembling clip art for compositing. Ideally, all clip art is licensed and paid for. But because companies are looking to slash costs, things oftentimes fall through the cracks. The Creative Director probably called for "more dramatic skies", so the graphic designer went back and found something on Google Image search, and assumed that if they modify the colors enough no one will be the wiser, and he won't have to bug the project manager with approving another stock art license purchase.

At the end of the line is Netflix who accepts the finished product. Of course they won't admit to anything. They probably had nothing to do with this.

If this photographer is smart, he would have registered his work with the copyright office, and by now should be talking to a copyright attorney.

now everyones looking for ,or waiting for an article on how to register photos so this doesn't happen to them.

Want to learn how? Ed Greenberg & Jack Reznicki have a great book called The Copyright Zone: A Legal Guide For Photographers and Artists In The Digital Age. https://www.amazon.com/Copyright-Zone-Photographers-Artists-Digital/dp/1... . It's a great book that every photographer should own. I believe they are working on a new edition as well.

To me this is open and shut appropriation. Completely legitimate use of an appropriated photo. I can see how some people may not think this is fair.

But it’s the same law that allowed Andy Warhol to make a statement about mass consumption using a cambells soup can (a copyrighted label) in his art without it being considered copyright infringement.

Someone took the base of a real storm pic to depict the upside down world. I mean? The original context is completely different.

If you think this is copyright infringement google to find out who the highest paid photographer in the world is. It’s an artist that takes Marlboro advertisements and crops out the logo to change the context in which you view the image. Sells prints for 90k a pop.

Also, copyright ownership lies with the creator. All he has to do is prove he created the pic to prove copyright infringement. You don’t have to register to have ownership. It just makes things less expensive if you do have a legal issue and have sent it in.

It’s definitely his photo though. No shadow of doubt on that front.

I know that sucks, they should have paid for that data to use. But legally I’m fairly certain they are in the clear.

Very sad if that's the shape of things in your part of the world.. How can they be in the clear? They stole his work to promote a multi million dollar production, very simple. How they used it is not important. The fact that they used it without permission and with complete disregard for him is the point.

If I took few frames from one of their episodes, changed it to black and white, added some effects and used it to promote my video project, profitable or not, would that be OK too? I mean, I did not use the whole episode I just took a few frames from it...??

They don’t need permission. Lookup copyright law. It’s called appropriation. It’s not stealing If your using it to create something different. The guy that spent copious amounts of time making this photo illustration could have used any photo of a tornado... as in the persons photo has no relevance to the final work.

What contribution has the original photographer really made? Zilch. Nada. Nothing. A vortex and cloud line? Like you can’t find that 10,000 places in 5 mins royalty free.

You might be right regarding the law. However, saying that his photo had nothing to do with the final work is well, wrong!!! The artist used the photographer's photo as the basis of his work, plain and simple. Everything else was built on top of the photo. How else could he recognized it?

So Netflix is so poor and so needy not to credit the photographer? Ask him if that's OK or, God forbid, offer some compensation? Nonsense.

As for the law, who knows. We might find out If he ever decided to do something about it.

Sean's photo was clearly used here, but this is concept art and was never intended to be sold as a final product or used in advertising. The concept was meant to convey an idea to production. Likewise I'm sure a bunch of people in Hollywood right now are saying "it's like stranger things, but ..." It be silly for Netflix to go after those people.

The fact that it was seen in the wild is problematic, made worse by a Netflix mid level producer trying to run damage control. But the intended product is completely different. At best they could go after the studio producing this promo or the original artist who did the composite, if he had waited a few months and then seen his work in the actual show he'd have a good case here, but a making of promo piece is small potatoes.

Here is an interesting case from 1971 involving jethro Tull’s ‘Aqualung' cover album, one of the most iconic of all times:
https://theoutline.com/post/4490/jethro-tull-aqualung-cover-artist-burto...

The Shakespeare rule applies. The Bard's work is out of copyright but a publisher can copyright the format, introduction, font, covers, etc, etc. of any new publication of his work. The occurrence of a natural phenomenon cannot be copyrighted but an image of that phenomenon can be whether it is digital, film or in oils on canvas, because the image is as a result of the labour of the photographer / artist. Netflix proposing such an argument need to be cautious otherwise we can all take stills of natural phenomena from Netflix productions and use them as we like using exactly the same argument.

Oh just watch their none trademarked productions for free. I am sure they will be fine with that....

Any lawyers here to give their two cents? Last year Canada Supreme Court decided that the photographer owns her/his photos, period. I am glad they finally made a ruling on it here.