Is This Ansel Adams Photo up for Auction at Sotheby's Criminally Undervalued?

Some of Ansel Adams' most famous works will go up for auction at Sotheby's in December. The labeled prices seem shockingly low for someone with Adams' reputation. Is this a reflection of where photographers sit in the art world?

When you hear the name of Sotheby's, you think of high-priced auctions and the rich and wealthy throwing wads of cash at items that the economically elite of this world like to dabble in, and the kind that you and I will most likely never get our hands on. For an item to go up for auction at Sotheby's, we imagine that it must be something pretty rare and special. From December 14, Sotheby's, New York, will be holding an auction for some of Ansel Adams' most famous works. If you don't know who Adams is, he's about as famous as they come in the photography world for his black and white landscape works in the National Parks of the U.S. The works are being put up for sale by the longtime collector and oil company CEO, David H. Arrington, and represent one of the most significant and impressive private collections of Adams' work in the world.

However, when I saw the expected prices of some of the works listed, I was rather surprised. For example, an early print of "Moonrise," "Hernandez," and "New Mexico" are expected to get between $700,000 and $1,000,000. Sure, that's a pretty impressive price for a printed work, but when you think that Peter Lik's "Phantom" (supposedly) fetched $6.5 million, and Andreas Gursky's "Rhein II" got $4.3 million, Adam's expected price seems criminally low to me, considering his iconic status in the world of photography. Also, when you think that Picasso's 1955 painting, "Les femmes d'Alger (Version 'O')," fetched $179.4 million in a Christie's auction, it reinforces how low the expected price for Adams' work is.

What do you think? Are these expected prices low, or do they represent fair value for Adams' work? On a bigger note, do photographers sit way down the pecking order when it comes to the art world? I'd love to hear your thoughts in the comments below.

I think that generally speaking fine art collectors want work that feels "exclusive" and I just don't think Adams' work fits that bill. Most of his portfolio was random landscapes in the States that to the untrained eye look just like any other landscape shot put through a black/white filter. His achievements were unquestionably impressive, but the work itself just doesn't hold up as an iconic piece of fine art. At least not enough to project into the millions in terms of value.

As much as I hate to say this, you speak truth.

Gurskey kind of presents himself as an artist who just happens to take photographs. Ansel Adams is more of a photographers photographer. We love him but he never really broke into the snobby art world. Don't even get me started on Lik.

I agree, but snobbery has little to do with it. Gursky’s art is more than just pretty pictures... they are among many other things, social and political commentary. 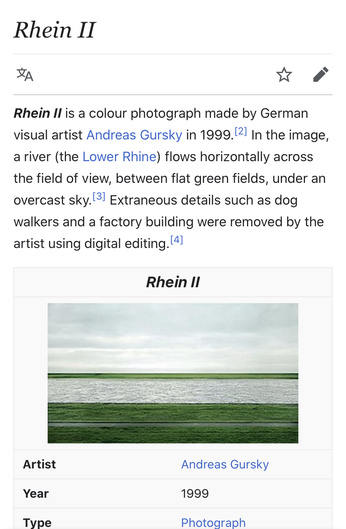 I actually have no idea what that means.
1. I’m Australian
2. I live in Japan
3. I don’t care much for US politics, or any kind of politics
4. I’m asking about a specific Gursky image, in which I’m struggling to see political or social commentary, much less a bazillion dollar price tag

I think what makes the Rhein II interesting is that:

1) originally there were towers and a lot of other things in the background that Gursky removed digitally after having his negatives scanned. To do that for a photo that large in size, in an era when the pinnacle of computing was the pentium 4, was a rather remarkable thing to Do.

2) by removing those elements, Gursky Is recreating a beauty that we can never have in an industrialized world, which is somewhat of a social commentary

3) it has to be considered within the broader context of his work. Taken in the context of his other work, such as the 99 cent store picture, or the north korea photographs, he seems to be trying to say something about consumerism, populism etc..

4) some of his more recent work, like that image of the world map, he spent months recreating the ocean to scale because he could only get high-res sattelite pictures of the islands. I don't know the exact process, but it is quite nice to see someone just dedicate themselves for months or years to the creation of a single image.

5) the size of that image is huge!

Personally for me, as much as I like Gursky, I do sometimes get a sense of coldness from his images (but that might be the point of his work). I think that sense of detachment and coldness can sometimes be off putting.

Ian you are rather silly for the author of the original article ... Gursky is not worth a bazillion ... whatever that means.

If you don’t understand art, perhaps writing an article about art isn’t really your thing.

If you want to know what is in Gursky’s portfolio... maybe Google it. Maybe read up about him before you make a social commentary about him or the art world.

Had no idea Australians living in Japan have no sense of humor, sorry...
Answering your question - no, there’s no politics in that image.

Also, and more importantly, at this stage Gursky had a body of work that is undeniable and Rhine II cannot be taken out of that context.

That, combined with all the technical and messages illustrated by Sanwal, is the value of Rhine II

This is just my opinion. I believe that whatever "message" an artwork may have, it should be conveyed to the audience by the artwork itself, not by studying a bunch of backstories (although knowing the backstories may add interest to the work). For example, I "understand" Gordon Park's "American Gothic" without having to study who Ms. Ella Watson was and why Parks photographed her the way he did. That, to me, is the power of art. If the audience cannot "understand" Rhine II without knowing the backstory of Düsseldorf, then, IMO, this piece of art fails to express the artist's intention.

Iain Stanley, you don't understand how art is valued, so maybe you shouldn't be writing articles on a topic that you don't comprehend. Ansel Adams made prints of the same image with abandon. In many cases there is no record of how many prints were made, many were not signed, etc. When you purchase an Ansel Adams print, you are definitely not purchasing anything that is unique. Furthermore, Ansel Adams's work is seen as a cliché in the world of art. His letter against the work of William Eggleston was further proof that the man just didn't get it. Maybe Ansel Adams is your hero, but that doesn't mean that his work is undervalued.

Perhaps you should look at the auction site linked in the article...... here’s a screenshot for you

Wow, you don't get it. It doesn't matter that this print is an original. There are hundreds of photos of the exact same image all over the world. That depressed the value for ALL of them!

No, I responded specifically to your answer. You told me I didn’t comprehend anything about art values and then told me that Adams printed untold copies of his work and there was little record of signed prints etc. In the case of the item used in this article, you’re wrong on both counts. It was a limited edition print, one of the “exceptionally few of its kind”, and it was signed by Adams.

LOL, limited edition? If so, what is the print number?!? And again, you keep on missing the point. There are hundreds of "'Moonrise, Hernandez, New Mexico'" prints out there, and most of them are original Ansel Adams prints. What devalues them is not that they are fake. They are devalued by the fact that there are hundreds of them and nobody knows exactly how many. Instead of writing clickbait, next time, why not actually research your subject?

No idea. If you’re so sure of yourself, why not contact Sotheby’s and let them know their mistake? I’m just reporting what Sotheby’s has written. You obviously know more, so get in touch with Sotheby’s and set them straight

LOL. Sotheby's is fully aware of this, and that is why the print is appraised at the "Criminally Undervalued" figure of $700,000, which is still, as I am sure you well know, given your extensive research on the matter, about 10 to 40 times higher than a regular Ansel Adams print goes for. At such low prices, undoubtedly you will be acquiring a few of them tomorrow. I'll let Emily know.

I have nothing against Gurskey. I just prefer Adams.

There is no comparison. Gursky is a far greater and more accomplished photographer and artist.

But you are free to love Adams. Buy his work if you can!

Maybe these photographs would fetch more at the auction if Adams had replaced the sky with something more dramatic!
/s

If only he had Luminosity... sigh 😌

I know you’re being humorous and sarcastic but ironically, Adams was renowned for his work in the darkroom with shadows, blacks, contrasts etc. So I daresay had he lived in the modern era he probably would have used sky replacement!

True, read somewhere he was a chemist than a photographer. He spend hours in post processing to get what he wants.

I can see where you're coming from when making that statement, but I don't believe he would do that. That kind of editing is doable in the darkroom.

Here's an example of someone doing such a thing:
https://imgur.com/gallery/SeDoh

Here is another example of editing with film photography:
https://allthatsinteresting.com/teddy-roosevelt-riding-moose

Even removing things from photos in the darkroom was doable:
https://petapixel.com/2018/11/30/that-iconic-migrant-mother-photo-was-ph...

The techniques were there, and Adams was quite capable of doing these things. He didn't though.

Those aren't criminally low prices; those prices mentioned for others' works are criminally high.

Yep, it staggers me that people have $50 million spare cash, and they’re willing to spend it on a painting.....