Banksy’s official photographer for a period of 11 years has revealed many of the trials and tribulations the pair faced while the infamous graffiti artist spray-painted his works around the globe. Also working as his agent for a time, he says it was his responsibility to see that Banksy was never arrested. “We were lawless and did just what we wanted,” he says.

Steve Lazarides met Banksy while on a magazine assignment in the late 90s. Both hailing from Bristol, UK and sharing a love for graffiti art, the photographer says the pair were an instant match.

In his new self-published book, Lazarides is giving away many of the duo’s secrets. For example, their trick to never getting arrested was simply wearing hi-vis jackets and using traffic cones. “Nobody stops you if you have them,” he says. The closest the pair got to ever facing police was when a few transgender sex workers misconstrued some of Banksy’s work as being homophobic and called the cops.

Another tactic of theirs was having Lazarides pretend to be a film producer and giving Banksy a written note of permission.

Readers hoping for a glimpse of Banksy’s identity, however, are due for disappointment. Any shot that doesn’t have the artist facing away from the camera has his face concealed. We can see from his hands, though, that he is Caucasian.

The stories and accompanying photographs can be found in Lazarides’ book, Banksy Captured, which is approved by the artist himself. After two successful editions, he says he may even do a third “if [he] can find where the files on my hard drive have gone.”

Posted In:
News
via:
The Guardian
8 Comments

/ August 19, 2019
How the Daguerreotype Started a Victorian Black Market for Pornography in London

Hide in plain sight... genius. Ought to be a fascinating book.

Maybe it was difficult to "get away with it" in the early days, but I'm pretty sure that the only reason that Banksy is still "anonymous" at this point is that no government actually cares enough to track down some dude that's tagging up some walls and playing pranks on a bunch of people that probably sit around sniffing their own farts.

As is anyone making a living in fine art

cause everyone is as famous as banksy and doing it as well as him... riiiiiiight.

We saw the Banksy show in Florence. People got it. 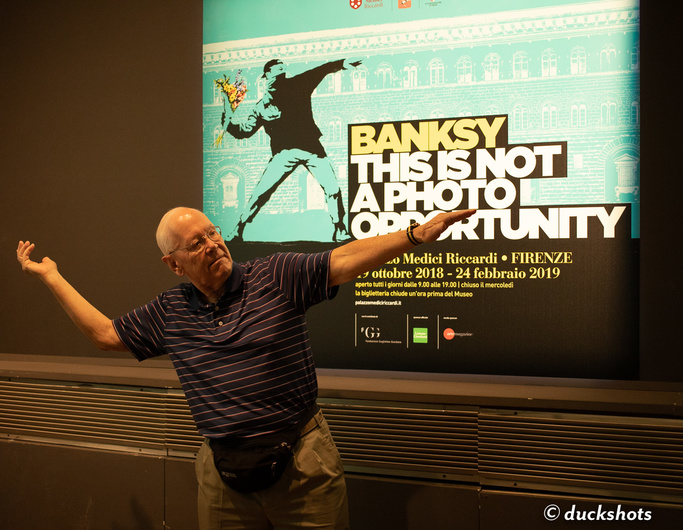 Today BANKSY aka FAKESY blatant and trickery misappropriation and its rip off kulture continues through its post colonial tradition with the street swindled work of How Many More Times Mouthpiece Jo Brooks and her client Banksy aka FAKESY who steals idea, content and form contrived from urban street artists like Blek Le Rat and other Graffitti LGBT street artists Alex Donis..

its Shut yo Mouth Jo Brooks aka Yo Crooks who markets and presents Banksy as the so called pseudonym of a good to go to the bank street artist whose identity remains unknown yet is publicized for his hipster controversial, and often revolutionary chic themed, stenciled pieces. However it is our institutional critique and expose which reveals that its language is only an attempt at marketing its speculative banksy investment through its recognition of a well placed contrived campaign in stark contrast to its difference as an analysis.
In the early 1990s, Banksy son of well to do Architect began ripping off styles promoting himself as the new voice from the streets only with the intent to establish his sole graffiti career fronting with Bristol’s graffiti crew DryBreadZ Crew. In the late ’90s, he began using stencils secretly stolen and sourced from Blek Le Rat with a publicity campaign that was derivative from many of the other street artist. Steve Lazirides cashing in on the Banksy hype was an extension of its racket.
Bristolian Banksy developed his signature style and become more widely recognized around Bristol and in London lead to a hyped bullshit contrived media career while wearing the anonymous mask adopted from other street artist..
Banksy’s press released statement authored by Brooks financed by Lazirides have only attempted to legitimized his secondary market return, “The artwork of Banksy is characterized by striking images, often combined with slogans. Often engaged with political themes, satirically critiquing war, capitalism, hypocrisy and greed. Common subjects Banksy uses include rats, apes, policemen, members of the royal family, and children " very much like an artist named Blek Le Rat..
The tandem of Lazarides,Jo Brooks and Fakesy work together in developing a contrived reputation for staging and publicizing so called anti-capitalist work only as radical chic, with an eye towards establishing its filthy lucre commodity and branded name on the secondary market.
The field of postcolonial studies was once influenced by Edward Said's in his classic book, Orientalism predicted and summarized a future dystopic landscape where History will ultimately question misappropriated works as post colonial, with acts of imperialism which is only directed towards a hegemonic initiative of only political and economic control....
What Post Kolonial and privileged Jo Brooks public relations teams fails to comprehend is Banksy has misappropriated and staged his whole publicized career from references from the indigenous voices of the ghetto as politically incorrect thefts..
Through an elaborate well planned out campaign initiative Banksy and his publicist Jo Brooks have been successful in historically lifting or staging contrived media events referenced from the work of many urban street artist styles named and brands including Blek Le Rat and others as obvious blatant infringement agenda until historical revision will be ultimately introduced to save the day..
FUCK YOU FAKESY..
Banksy vs Blek

Did you copy it from somewhere or this comment is your creation?