According to the Hindustan Times the Darul Uloom, India's leading Islamic seminary, has issued a ruling that "photography is unlawful and a sin." The ruling came from an authority at the seminary after an engineering student requested to pursue a career in photography because it was something he was passionate about doing.

"Photography is un-Islamic. Muslims are not allowed to get their photos clicked unless it is for an identity card or for making a passport." - Mufti Abdul Qasim Nomani, Vice Chancellor of Darul Uloom Deoband. India Muslim Law Personal Board member Mufti Abul Irfan Qadri Razzaqi also agreed with Nomani's fatwa when he added, "Islam forbids photographing of humans and animals. Whoever does that will be answerable to God."

When the reporter pressed them about the issue highlighting the fact that those in Saudi Arabia practice photography Razzaqi answered, "Just because they are richer than us doesn't mean they are also correct. If they are allowing photography they will be answerable on the Day of Judgement in the court of God."

Will this change the way Muslim people start to view photography? If you practice Islam, I'd love to hear your thoughts in the comments.

I wonder what the plans are for the photo gallery on the Darul Uloom's seminary website. 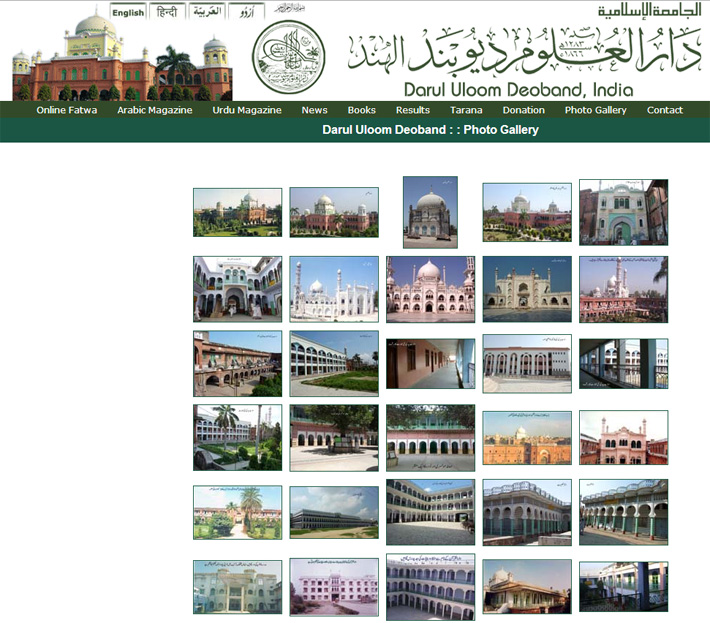 Update: This morning the rector of the influential Islamic seminary, Abul Qasim Nomani, has said, “Darul Uloom does not have powers to ban anything. It is the government that has such powers. Our fatwa department simply issues religious advice when its views are voluntarily sought by an individual for his or her own personal use." He however said Islam did not permit idol or image worship, which is why the Prophet did not allow his portrait to be made. This is why images of human beings, whether in the form of a drawing or photograph, are not encouraged. “But there is no ban from our side,” he said. According to Hindustan Times he refused to directly comment one way or the other on whether photography was un-Islamic.

they should crawl back into a caves these muftis.

all this stupid stuff is why i don´t want them (muslims and co.) in my country... they don´t fit in a modern western society and the fanatics don´t respect other peoples freedom.

they should stay on the other side of the planet.

Yea! Christians are so much better! you know with their hypocritical judgment of everyone! the way we get to pick and chose what part of the bible we follow! The fact that almost all terrorist activity in the US has actually been white americans (Oklahoma city bombing?)! We never fought a holy war or anything! Christianity never persecuted thousands of people! Go back to your own country because ours was founded on the idea of religious freedoms!

who says he is religious.. are you clarvoyant too?

stick you religion where the sun don´t shine!

and that´s my freedom to say!

The point is ive met more americans who should leave this country because they dont realize the idea that our founding fathers died for equality, understanding, and religious freedoms, then ive met angry islamics. I would take a muslim over a redneck any day.

Speaking as a Christian redneck, I have no hate for other religions or races visiting or moving into the United States. Here, we may all practice our religion, take advantage of our freedoms, and learn from each other. Everyone of every religion has hypocritical traits. As humans we are 'in it for ourselves', though it is important we make solid efforts to respect one another and work together. I have friends and family who have fought in our battles. I support them, but I do not forget that God loves even our enemies. Why don't we put our racism and judgment aside and share our beliefs in a civil manor? Besides, as a believer in God whom created an entire universe, I believe He has room for more than only one religion so long as we believe in our Creator.

"Christians are so much better!"

Bad generalization. Some are, some don't. Those who persecuted "thousands of people" were not Christians. You are a Christian if you follow the teachings of Christ, not only if you say about yourself that you are a Christian. It's so hard to understand this and stop thinking like a fanboy?

'Your' country? I am appalled by the level of racism on this thread by dick's like you.
One scholar in one area in one state in one country does speak for an entire religion- try visualising this you numpty

mustafa.... it only took a dozen terrorist to bring the twin towers down.
why is it that terrorist are fanatic islamist?

haha, way the second dude,... that seminars doesn't mean represent all muslim thought from around the globe,.. In Islam there are also many differentiatoan, just like sect in other religion,.. I'm a muslim and I'm a commercial photographer... I'm Indonesia, one of the most democratic n modern mindset country with the biggest populations is muslim. We disagree with that seminars result which says "photography is a sin". Muslim, Islam is not always related to extreme thingking,... come visit my country if you don't belive,... Go to Jakarta or much better go to Bali and prove what I say, we were muslim but we still respect to any other religions and live together.

Don't generalize this seminar which came from India AS A GLOBAL MUSLIM THOUGHT ABOUT PHOTOGRAPHY! We have differentiation,....

what did their stupid prophet knew about photography thousands of years ago?

They referred to ANY form of portraits I.E. a painting in his time.

yeah that makes them look much more intelligent.... not.

I wasn't trying to stand up for them. I agree that these kind of people are ignorant, closed minded and all together a detriment to the growth humans. But I was merely clarifying what *Fstoppers* said. notice that part ISN'T in quotes?

i was not attacking you... just saying.

I dont think its about photography exactly, its more about making something to idolize. For example, how many teen girls hang posters of their favorite singers? This is false idol worship which is a sin in islam and christianity

No, hanging up a poster is not false idol worship. Worshiping a false idol is. Having a picture up of someone isn't worshiping them. While I am not Catholic, I have been to many Catholic churches. Inside them are images (be it paintings, stain glass windows) of many people who aren't Jesus. They aren't worshiping them.

Thats a really good point. I personally agree with you but i see from the other side too. You cant deny that there are many people that get obsessed with media figures. Sometimes to the point of insanity (John Hinckley, Jr.). I consider myself to be a christian and i personally think that, while there is an obvious difference between fandom and worship, sometimes people can be a bit overboard and borderline worship and i think that these religions are just trying to stop it before it starts. I see it as a test of faith.

You gotta good point, too! Totaly agree with You!

Ironic that this ridiculous rule comes from the same people that worship a black stone,and check out Iran with pictures of their precious Ayotallah ...

Anto, no one in Islam worships the black stone. That is a misconception

they only like to run in circles... these intelligent people....

Talking snake. It's not really productive to throw stones at one, because they all have things that people who don't believe will ridicule.

Thanks for clearing that one up. Care to address the other point?

Saying that shows the raciest manners you have raised at. You have no right to call any
holly figure stupid .. I’m sure you are the stupid ignorant raciest sick person

I see the comments on FStoppers are getting a lot like YouTube or Slashdot... Each to their own when it comes to religion... I do agree that it is a little silly, but "no meat on a Friday" was a Catholic "Law" and "no pork" is a Jewish "Law". both of which are as silly as no photography...

how many jews blow up skyscrapers?
or killed kids as suicide bombers?

How many wars have been fought over religion FULL STOP? Forget what religion is doing what ever, they all do it for the same "GOD". its all some magic person in the sky who invented the earth and all the people... when you boil it all down, its all madness...

but the past is not today.
today the fanatic islamist are the problem.