A photographer with more than 300,000 followers who lists Sony and Adobe as his clients has announced his plan to quit photography. After 10 years, he says he is no longer excited by it: “I’ve done so many shoots, so many trips, so many pictures. I just want to move on.”

Taking to his Facebook page, Paris-based photographer Victor Habchy revealed he had grown tired of taking pictures. Despite a successful, decade-long career, he insists: “It is time for me to quit.”

Habchy has worked for big brands such as Adobe. He also represented Sony in France on the Team Alpha project. His impressive works have helped him acquire a following of over 300,000 on Facebook.

Habchy says his career was never intentional, but rather something he decided to pursue after finding viral success with a series of images he took at Burning Man Festival. After an overnight surge in interest, some of which were paid opportunities from print publications, Habchy decided to try pursuing it professionally.

At first, I didn’t even [know] I could earn money […] Then I went to the Burning Man, probably the biggest turning point of my career. I posted the pictures online and went to sleep. The next morning, my mailbox was filled with request[s] from newspaper[s], with model[s] who wanted to meet, with messages of people saying how much they loved my pictures. It simply became viral. I was overwhelmed.

It was in the following years that Habchy was enlisted for jobs with such high profile clients — and it’s easy to see why. Alas, he claims it is time for pastures new. “I loved every single moment of it… but it is time for me to quit,” he wrote. “Because I’ve done so many shoots, so many trips, so many pictures,” he writes. “I just want to move on.” 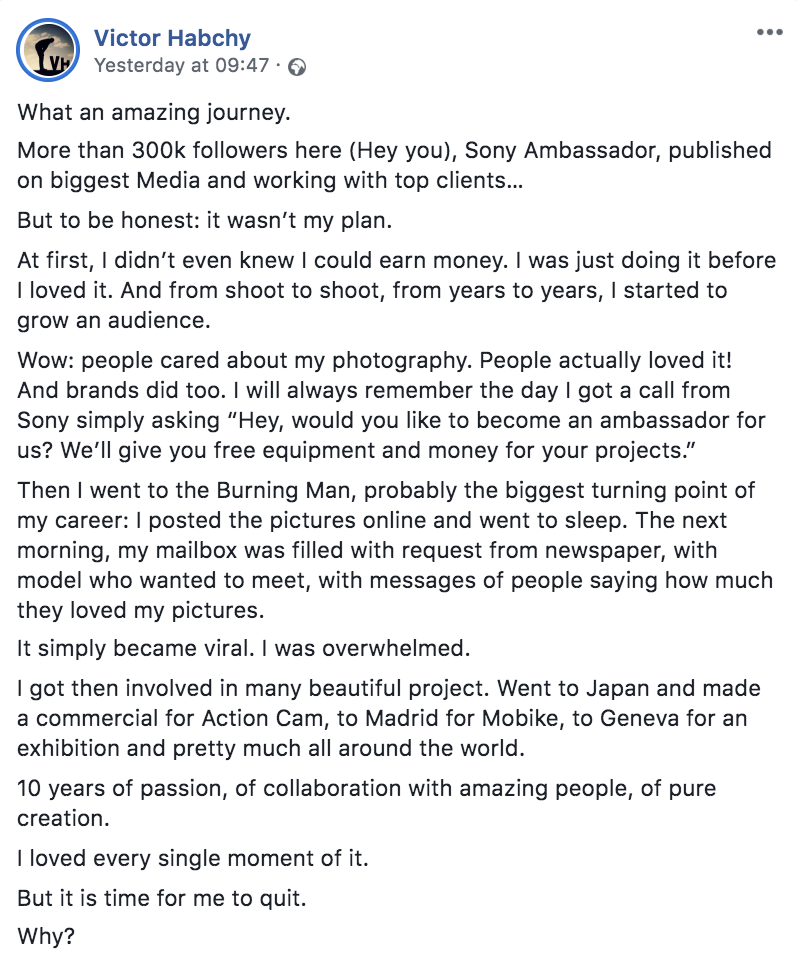 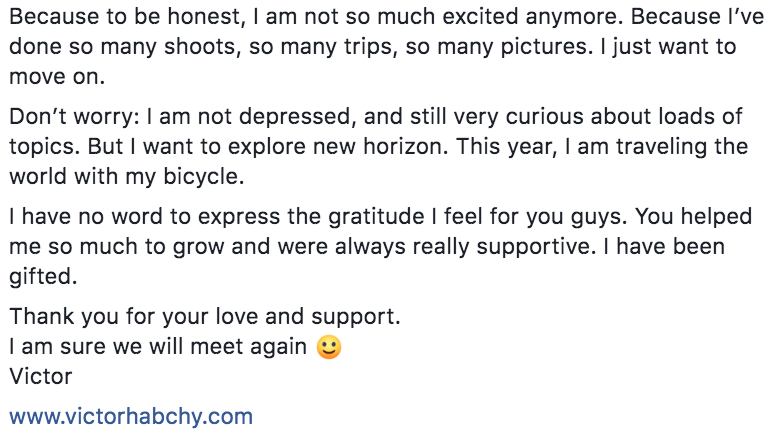 Speaking to PetaPixel, Habchy seems optimistic and says he has plenty of other interests to get excited about – including making bread. But until he tries his hand at that, Habchy tells me he is currently cycling the world, more than 7000km, starting in Paris and visiting Istanbul, China and Bali.

All images courtesy, and used with permission of, Victor Habchy.

Posted In:
News
via:
PetaPixel
21 Comments

Documentary / May 8, 2020
How My Neighbors’ Doors Are Keeping Me Creative During Lockdown

My guess is he has had that moment of realization where he no longer wants to be behind the lens capturing others have magical moments...he wants to be in front of it [ metaphorically speaking ] being in the MOMENT! Kudos to him for having this awakening!!!

I wonder if his loss of interest is because he's being commissioned to do work and thus not creating as much for himself. I can only relate with my decision to not make photography a career after realizing that I don't like shooting what I'm told to shoot. As soon as someone else starts giving direction, I've lost all interest in the project. Or it could be for unrelated reasons.

Either way, I appreciate his conviction.

A very talented photographer and good on him for making that tough decision to move on. Well done!

Heard it way too many times.
The problem with 21st Digital Photo is the current photographers are quite arrogant and self assuming. To be blunt .. many in the bizz don’t want to be associated in that crowd.
Many talented artists are leaving it to the GWC and the big arrogant names.
You know who ..

Never heard of him...

And? Are you implying that because *you* have never heard of him that he shouldn't be well known in certain circles and/or doesn't deserve any accolades? Please, what is your point?

Followup question: Are you a millennial?

Far from it mate.

As one of my photography instructors said when we started, only 30% of you will be professional photographers in 10 years.

Victor who? No, but seriously though....if he is comfortable with his choices then it's a good move for him. If you love what you're doing, you'll never work a day in your life.

I've heard that often said, but I don't agree at all. When your passion is also your job, you risk losing the enjoyment you get. Certainly, try to choose a career you're comfortable with, but your passion should belong and respond only to you.

Yes...that is true for many, but every person is different. I never got tired, bored or disenchanted with it. But that's just me. To make a blanket statement like that does not speak for every photographer in the world. Maybe best to let them speak for themselves.

I mean doesn't everyone want to make that bread. 💸

I have worked in the commercial field for about 40 years. I know exactly how he feels.

I wish him well and hope that he can pursue his dreams to the fullest . . . and beyond.

His photos from burning man are the most spectacular and the most poignant I have ever seen . . . beautiful work from a brilliant mind.

Over the years I have seen so many who went into the business side of photography lose the passion. I think what gets most people upset is that he had this great opportunity that he gave up but that is a good thing. Now someone who still has the passion can replace him.

When income is no longer an issue...

It might be an issue when you achieve something, which is craved by many aspiring artists, or even fanatically pursued, this creates a pressure that you must love that thing because it's a dream of many others. You feel guilty that you don't appreciate what you have, but imo if the thing becomes your comfort zone it gets boring. Like this guy, I think he just got bored, or sick of working with commissions, clients, whatever. Most certainly, not everybody has the same passion towards just a single art-form and it is a common misconception is that in order to succeed, you must focus and do only one thing, to become a master of the craft. This is not the way for some people until they explore their potential with different things that they are interested in. Also, there is more to life than just work and discipline, no matter how passionate you are, do whatever your gut tells you to do.

If he is traveling the world on a bicycle, that would be an excellent opportunity to take some pictures, IJS.