Friends and social media are mourning the loss of locally well-known Hawaii-based photographer and tour guide Sean King. He died early Thursday morning on the lava fields of the Kilauea Volcano on the Big Island. King and I were Facebook friends and our paths crossed once while doing photography on the summit of Mauna Kea. He was the stereotypical New Yorker, tough but with a huge heart.

Thursday evening, my Facebook feed filled up with posts about King's passing. There’s no doubting that he was loved and respected by those on the island and by photographers from the mainland as well. 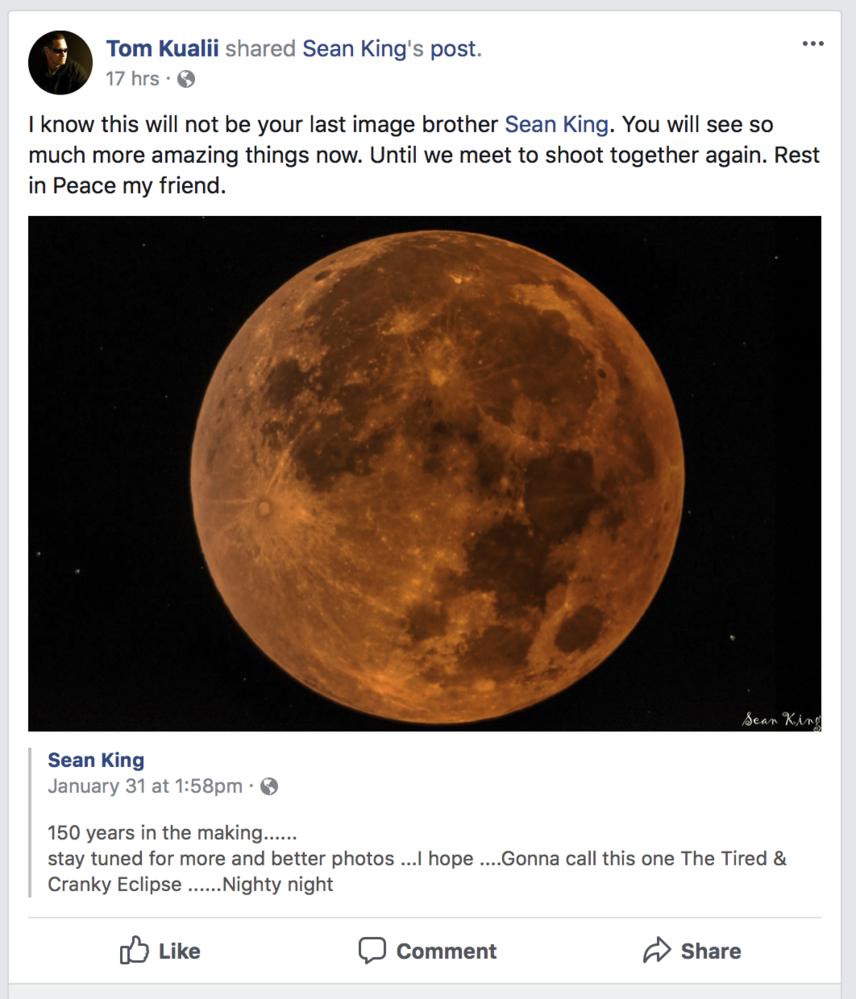 Apparently, King was leading a group of three tourists/photographers onto the Kalapana Flow when a heavy, stationary rainfall developed over the area. While a cause hasn’t been released, it is suspected by authorities that noxious gases released through the interaction of the rain water with lava. According to the United States Geological Survey website, volcanoes produce a number of gases including carbon dioxide, sulfur dioxide, hydrogen sulfide, and hydrogen halides that, depending on concentrations, range from irritating to lethal. Having spent a number of days and nights on the lava flow myself, I can attest to the extremely dangerous nature of not only the lava itself, but the razor-sharp rocks and the stifling fumes.

King was a fixture out on the lava flows and was well aware of the challenges of doing photography in such a formidable environment. In fact, the New York Daily News ran an expose of him in 2013 where he talked about the risk of the lava and the poisonous fumes. Flickr also did a piece in “The Weekly Flickr” on King back in 2013 where you can hear him tell his photography story firsthand.

King's passing is an unbelievably sad event and an unthinkable loss for his family, friends, and the island community. Please enjoy doing photography and always remember to be safe out there.

Wow this is horrible news! I remember looking at all his images when we were on the Big Island for a project with Mike Kelley. So sad....just goes to show how serious those lava fields are. I wanted to do a doors off helicopter ride over this same volcano but many of the guides said they weren't allowed to do that because of gases.

It is really sad. I know many of the pro and amateur photographers on the Big Island and they are all heart broken. The lava fields are serious business and everyone needs to be extra cautious when out there.

Steve, like you most of my interactions came through our Facebook interactions. As a budding photographer Sean inspired me to look at the night sky compositions a little differently and always had positive things to say about my images. His loss to our small and tight knit Big Island photographer community has been an out pouring of love and respect. I have realized through his young life being taken too soon that I now cherish my friendships in this loving and sharing community in a whole new light.
Mahalo for sharing.

Wow...so he passed out and died from the gases? 😮
How did his tour group survive?

There hasn’t been an autopsy but that is what has been suggested by authorities. The rest of the group was able to escape the white out conditions.

So he died. He could have been responsible for the deaths of his tour group because he had no oxygen tanks, breathing rigs or the like for any of them.
If he had lived and his tour member died he could have been prosecuted for negligent manslaughter.
He was a disaster waiting to happen. The tour group is lucky it was him and not them that died.

That’s a pretty low comment. Regardless of what actions did or did not happen, Sean lost his life. Have some respect...”so he died.”

Seriously? A man died trying to support his family, doing what he loved, and sharing it with others. No one goes out on that lava field without knowing the risks, the people who went with Sean included. It is not common for anyone to haul oxygen tanks out there. It is a slog across barren, hot, sharp rock. Anyway, I am not going to dignify your comments with more of a response. Be respectful.

And Brigham, have you ever been on the fields? This could have happened to anyone, even all the tourist who go visit daily. Easy to say things like what you said because Sean isn’t here to defend himself.

Good Post! Thank you so much for sharing this pretty post, it was so good to read and use to improve my knowledge as updated one, keep blogging…https://www.jestaplophotography.com/pre-wedding-shoot-charges-cost-mumba... find best pre-wedding photoshoot packages.