Fstoppers Reviews the DJI OSMO+: The Most Versatile Camera on the Market?

It's been the nuisance of the modern, technological era: shaky video. Shaky video not only is annoying, but the fix is usually expensive, bulky, and not too practical — until recently. DJI, one of the most innovate companies going right now has the answer to that problem, at a consumer price. It’s called the DJI OSMO.

It’s more than just a camera. The idea of the OSMO was to give consumers the key to creative freedom. The all-in-one camcorder was designed to be a perfect camera for anyone. Whether you’re a vlogger, action videographer, wedding videographer, or just simply a parent who wants to capture family moments, the OSMO was made for you. And boy did it deliver, and then some.

Before we dive in, I’d just like to preface that I spent extensive time traveling with this camera. There are some features I absolutely love and there are shortcomings I absolutely despise and hope they improve. I’m going to share and illustrate why this is my go-to camera for traveling.

What Is the OSMO?

The DJI OSMO is a video and photo capturing device that couples a stabilizing gimbal and camera into one piece that fits in the palm of your hand. There's really nothing like it on the market today, it's one of its kind. There are so many creative ways you can use this device, it's only limited by your creativity and the possibilities are endless.

You can create smooth video without a stabilizer, take photos, long exposures, panoramas, and hyperlapses without a tripod, live video, and more. Users can connect their phone to the OSMO via the DJI Go app to give them ultimate control. This user interface is very similar to other DJI controls, like the Phantom series for example.

What’s the Difference: OSMO Versus OSMO+?

What does that extra plus sign mean? There are minor, minuscule differences, but the biggest difference is the zoom capability. The regular OSMO is equipped with a camera that has a fixed lens. The advantage of the OSMO+ is that the camera can zoom; the focal length is 22mm to 77mm. The OSMO+ also has an acting aperture where you can separate your subject from its foreground and background.

Here’s a side-by-side comparison of some key specs for both cameras: 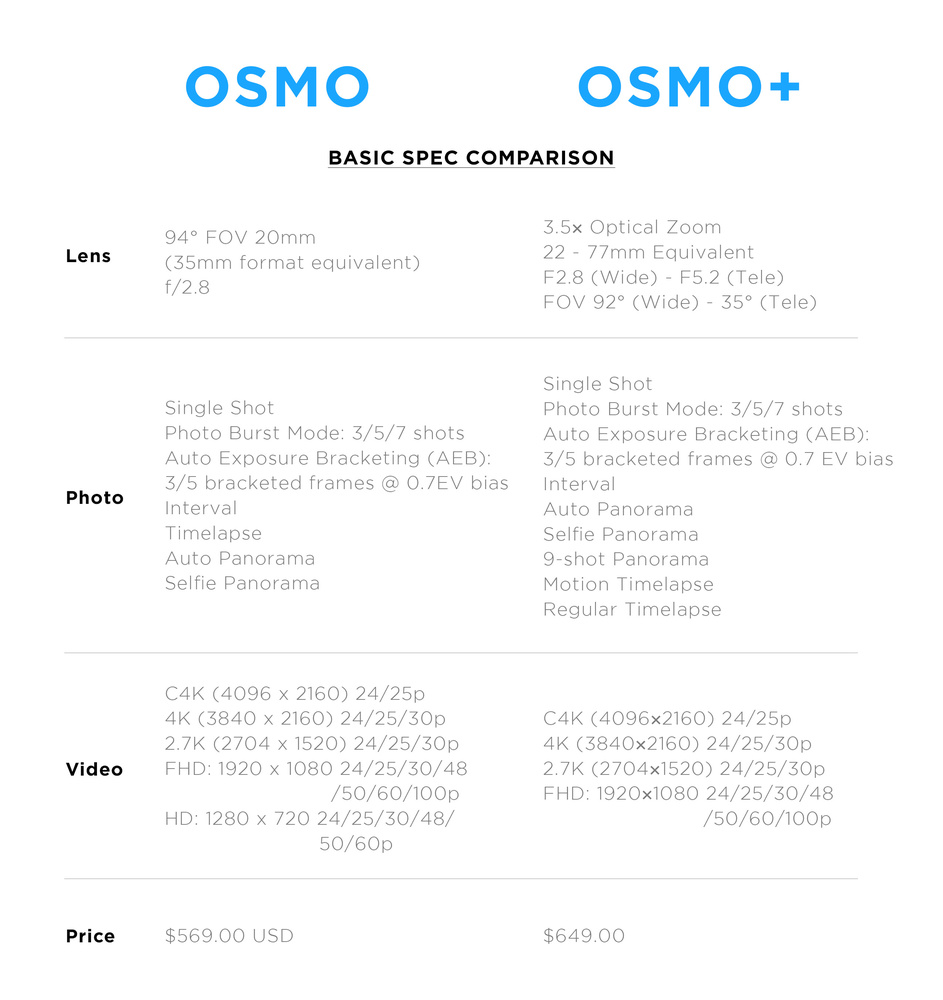 The Most Stable Camera in the Palm of Your Hand

The camera’s most appealing feature, in my opinion, is the stability that the OSMO offers. The days of balancing those bulky stabilizers are over. This little guy is amazing. In the video above, I show you how silky smooth the camera proves to be running up and down the stairs. The gimbal is not only stable but there are multiple ways to can pan and pivot the camera.

The out-of-the-box smoothness of the OSMO is very impressive.

Not only did the smoothness and the stability win me over, but the ease and smoothness of the camera’s movements was very impressive. There are a few ways you can maneuver the OSMO’s camera:

Just two taps and the OSMO re-centers itself looking forward.

You may or may not use this but I thought it was a very cool feature to have. Frank, who I travel with, and I both found this by accident in New York City. Our friends, family, and fans loved it as we brought them along with us wandering the city. You can read comments via the DJI Go app to engage with your viewers. It's also worth nothing that while you are live, you can also record simultaneously. It offers Facebook Live and YouTube Live capabilities.

The connection capabilities, or lack thereof, made me want to pull the rest of my hair out. When the camera hooks up to your camera via DJI Go app and Wi-Fi, connection speed is hit or miss. Sometimes it would connect instantly, other times it would take one or two minutes to connect to your phone. When the connection did delay, the moment we wanted to capture was likely gone and spoiled. It was frustrating at times, this is the most significant shortcoming the OSMO has in my opinion.

That's something I heard often when traveling with this camera. Since it's a relatively new piece of technology, some security guards and pedestrians have simply never seen an OSMO before. There were multiple instances where I was asked to put the camera away (and respected their wishes whenever asked). I remember walking through security at Stamford Bridge in London (Chelsea F.C.) and to my surprise the security guard recognized the camera and asked politely to be mindful whenever using the OSMO since it resembles a foreign object that can injure someone if used in a violent fashion.

Just make sure to be mindful of others whenever using this device, especially in highly-populated, metropolitan areas.

There are three basic options for audio with the OSMO:

It eats batteries for breakfast, lunch, and dinner. No seriously. I'd wake up with three or four fresh batteries for the day and come back home with none left. It likes batteries. Make sure to stock up on these if you're looking to purchase and travel with it.

If you're looking for something that's easy to use, compact to travel with, and an all-in-one solution to capturing content, this camera is for you. When you're traveling and you don't feel like lugging around with all that equipment, this is a great solution for that. I literally traveled across the pond with nothing but my OSMO and iPhone to capture moments and I came home with a satisfied feeling of capturing those very moments. It's very easy to learn and use, so your friends don't exactly need to be a seasoned videographer to figure it out and use it to its full potential. And considering the price point of $569 and $649, it's relatively not too bad of a price. There is also a cheaper option called the OSMO Mobile where your smartphone is the actual camera, but that's for another review.

Here are a couple of sample montage videos of my travels that I slapped together. By no means is it the most cinematic footage ever but this is just an example of how you can compile memories that you capture using the OSMO. Music lyrics may be NSFW.

OSMO and OSMO+ In Action

This video featured the original OSMO, which 100 percent of the footage was used with.

This video features the OSMO+. I'd say about 80 percent of the video I used the OSMO+, the other 20 percent was with the iPhone 7 Plus and stock footage.

Have you ever used the OSMO series before? Are you thinking about biting the bullet on one? Let me know your thoughts as well as thoughts of the review itself. I always love to hear feedback, good or bad.

I love & hate my Osmo. When it works - it is awesome - most of the time it does not work. And DJI nags to the point of distraction with their constant updates. Most of which make the product work - worse. And the "live" capabilities are defeated because you need to use Wi-fi to connect to your iPhone so you are left with data for your "live" stream. We tested with Facebook & Youtube and would get constant drop outs. Using the iPhone alone was better than going though Osmo for live streaming. It is a great concept but I use it less and less because of the nagging issues.

I feel the exact same way, when it works it's amazing, when it's buggy it can be annoying. I have been fortunate with going live and not having any issues with connection.

Are you problems ONLY with livestreaming??? I would help others to be specific here.

No the Osmo has been hit or miss in regular usage. I have tried every recommendation.
I keep upgrading with every DJI update and every ios update. There are times where it works fine
and others where I can't get it to work at all.....If I am doing something on my own I will try using it. If other people are involved I rarely pull the osmo out.

I love/ hate the osmo as well. I ordered the phone holder that attaches to the handle turning it into the osmo mobile and now the hate is gone. Using the Iphone 7 plus and an app called filmic pro, this now blows the original osmo out of the water. No more connectivity issues, just slap your phone in the clamp and turn the unit on. The best part is the battery now last somewhere around 3 hours!

Do you have a link for that?

Great for Boat to Boat shooting (With some modifications)
http://bit.ly/2hfw4SI

thanks for the review, I own a Osmo Mobile, your thoughts on comparing these with Osmo Mobile? i have bought few months ago and have not it used it outside. Problem #1 is connection, #2 i have a 7+ Black and the sensor has issues with finding black phone, #3 so using my old 6+ and bought a white cover, still not easy to get aligned and been some what frustrating and lazy :-)

I have not used the OSMO Mobile, so I cannot give an opinion but I am interested in trying it out soon!