I remember when I first started photography, I'd try and find out what lens and camera had been used for every photograph I liked. I was convinced that if I had that combination of glass and mirrors I would be creating masterpieces. Unfortunately, that train of thought is closer to smoke and mirrors, and I soon knew better. Curiously, however, I now think there's some truth to it, and that truth was revealed to me by a lens that is now my secret weapon.

Upon the publication of this article, the lens will be demoted from "secret weapon" to just "weapon," but photography is not an industry where selfishness with information is rewarded. The weapon to which I refer is the Zenit Helios 40-2 85mm f/1.5. In fairness, it's not a secret but rather a lens that isn't well known about and one I've never seen another photographer using out in the wild. We conducted an impartial review on this lens early last year, but I want to provide a rather partial review. Despite "Helios" perhaps throwing some people off the scent, this lens is a modern production and is beautifully made. It's an extremely fast prime lens, and it's 85mm, which is many photographers' go-to portrait focal length; I'm quite certain Dani Diamond would have his eyes surgically adjusted to fast 85mms if he could.

Shot at f/1.5 in natural light after a small library's worth of missed attempts.

Now, this lens isn't for everyone and it isn't — even for a guy who loves the thing — a general/daily use lens. Firstly, its build quality is so high that it can double up as a projectile and I'm confident could kill a human; it's that heavy. Secondly, it's manual only, which isn't ideal, especially when it can go as wide as f/1.5. Thirdly, it has more flares going on here than a 70s disco. I'm serious, this thing has a nose for taking direct light and smearing it across your image. I would go as far as to say that you cannot shoot towards the sun full-stop unless you're willing to craft a custom lens hood that protrudes out like a jouster's lance. Below is an example of a shot taken mid-afternoon where the sun is at an angle of around 45 degrees above and behind the model.

If only my softbox could redistribute light this evenly.

My fourth and final grievance is the double-edged sword of this lens. The circular swirly bokeh this Russian champion delivers us does mean that if you're shooting wide open, you're a kitten's fart away from the softest image you've seen since that photo you took with your flip phone drunk and in the dark sometime in the early naughties. I don't believe image sharpness is the most important component of an image, but the Zenit really does push it unless you've got the steady hand of a surgeon.

So, why do I like this lens so much? Until I bought my beloved Canon 135mm f/2, I couldn't really see the difference between images from similar focal lengths. There were subtle nuances, but nothing you could class as stylistic. The 135mm had me questioning that belief, and the Zenit 85mm has me fully atheistic towards it. Whenever I shoot now, I make sure I get the shots I need to, then I hoist the bokeh tank onto my camera body. It has a "look" that is very identifiable, even to non-photographer folk, and is traditionally a result exclusive to older (by which I mean vintage) lenses.

If you can nail the focus, it's hard to take an image that isn't cinematic and appealing.

One of the telltale signs for me that I love this lens (other than me sketching Zenit and my initials on bathroom walls) is that even when the light washes out my image and I narrowly miss perfect focus, I still don't want to throw the images away.

Washed out? Check. Marginally out of focus? Check. Shall I bin it then? Na, I'll turn it black and white and pretend it's artsy.

In conclusion, this lens is awkward, heavy, irritating, averse to bright lights, and erratic: 10/10, would buy it again.

Gear / August 26, 2019
I Purchased an Exotic, Expensive Lens: Here Is What I Learned

The resulting images are nice, but why isn't there an image of the lens discussed whatsoever?

I use a AF-S DX G ED Nikon Nikkor 24 - 120mm 1:3.5-5.6 lens (on manual) with a telescoping rubber lens cover. Its my go to and my secret weapon. It stays on my one Nikon and I rotate what I think I'd like to use on my 2nd Nikon, prime lens, macros or close-ups and even some shorter telephoto lenses. I have a 3rd Nikon that I double up on and use my telephotos and longer lenses on. My longest lens is a 650 - 1300mm just in case. I've never had to go longer than that, so far.

The majority of my lenses are the AF-S, AF-S DX Auto-focus ones made to work with my camera(s) with the Auto-focus features even though I've never used auto-focus. I also have some manual only 'older' lenses that I can use with my camera(s) but won't work with the Auto-focus feature of my cameras; I mostly use them on my 2nd & 3rd Cameras. On a special occasion with copious amounts of time to 'play' with my lenses, cameras and a model or models who will let me explore different photo options I will rotate through my arsenal on my Primary camera. I love them all and since I don't use the auto-focus and keep it on manual almost always they are all fine for me to use.

it all depends on available time and a willing model.

It's fairly cheap too, $300-400. Seeing MF glass priced in the thousands always makes me feel like I'm getting ripped off.

Que up the Leica fanboys who think I'm lazy for wanting AF...

my not-so-secret weapon lens is the Zeiss Otus 85mm f1.4. i was skeptical when the Otus series first came out because of the jaw dropping price. I happened to get a good deal on a demo version. It is the sharpest thing i've ever seen. Handles flare/back-light like my old CF Hasselblad lenses and has the smoothest focus roll I've ever felt. I use it enough to justify the price--I think.

What about Sigma 85 ART? I am curious from some educated standpoint, why still Otus?

I don't understand your question, 'why still Otus?' I've owned the Otus lens for more than a year. I did not mention the Otus from some theoretical standpoint, I mentioned it because of actual practice. Or were you suggesting that I dump the Otus for the Sigma?

I don't believe that the Sigma 85 is even shipping yet, but even if it is I don't expect purchasing one. I already own both the Zeiss 85mm and the Nikon 85mm PCE which is also an incredibly sharp lens which I should have also mentioned as a secret weapon lens.

I am sorry, I worded that very, very poorly, but yes,you 'deciphered' the text. You bought Otus and it 'spoke' to you, as an artist, you grew to like it, right? I am just wondering what are you thinking, new, AF, sharp lens, with nearly 'surgical' renderings, and cheaper. I wanted an educated opinion from a person who used Otus, not just bragged about it. But I guess I overshoot, because it is not out. I assumed you had both in hands, and still picked Otus. Wanted to know what decision you did and why. But since it isn't 'in the wild', kinda void question. Sorry if I confused you.

EDIT: I do think you worded it differently the 1st time I have read it. Sure you didn't edit for some reason?
EDIT2: Nah, you didn't edit, I must have just have a brain fart or something. Sorry.

This gives me the idea to try my Jupiter-9 Leica screw-mount lens on my 5D - if I can get an adapter for it. The Jupiter-9 is 85mm F2.0, and has been very sharp on film. Or maybe I should just keep on using the ultra-sharp 28-105mm II USM Canon lens, that I have settled on as my prime lens. A high percentage of my pics with that zoom lens are in the 80-90mm range.

"Upon the publication of this article, the lens will be demoted from "secret weapon" to just "weapon,"
"it's not a secret but rather a lens that isn't well known about "

so essentially a click bait title and no picture of the said lens? interesting read though.

Click bait title!
It's not a secret weapon! It's a lens mostly used by poor photographers in poor countries...

I bought a zuiko 55mm 1.2 a few years ago for similar reasons. The bokeh is incredibly unique and the flare characteristics are generally really nice. I'm too used to modern lenses though and it's pretty soft at f/1.2, so I must admit I've not used it in a couple of years now. One tip with vintage lenses; if you buy a mount with electronic contacts (just a chip glued to the mount basically - you can do it yourself too) then not only do you get some exif data (if you buy a programmable one), but holding down the af button when focusing will get your focus points to light up when in focus. Depending on the camera model a lot won't do this without the contracts.

I never had the 40-2. But, I did own the cyclop 1 (nightviewer by helios) lens, the same optically, just without aperture, just focus. It was heavy, and flared so much that it was useless in the sun, unable to stop it down. I was cool to mount on the x-t2 though.. second problem was: i couldn't focus it in the long end. So i sold it with profit, and got myself a Jupiter 9. 85mm f2. Less heavy, a tack sharper and 15 aperture blades, clickless, giving the same results as the helios 44-2 (n05 kmz version) that i also LOVE to use.
Recently also got a jupiter 11, which i still have to test.. looks crazy too.. :)
Gotta love the russians for putting character into photography..! 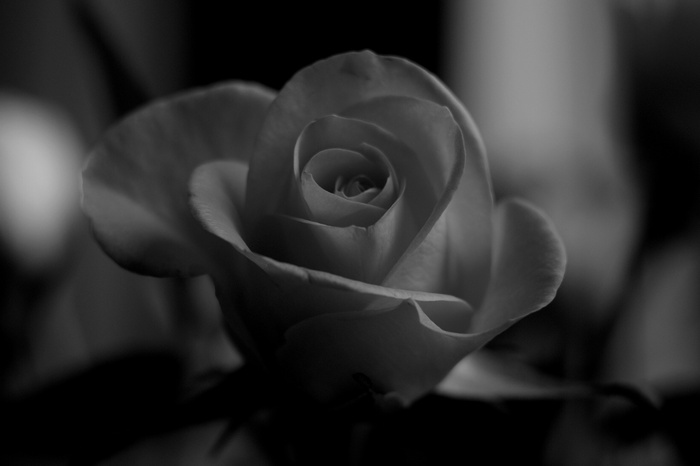 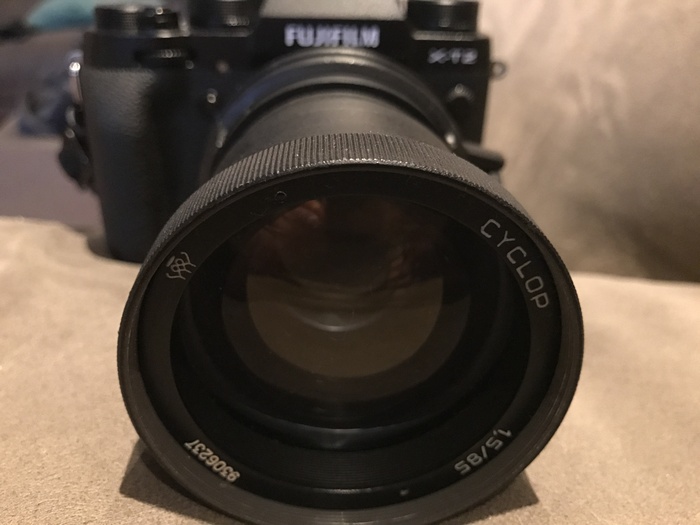 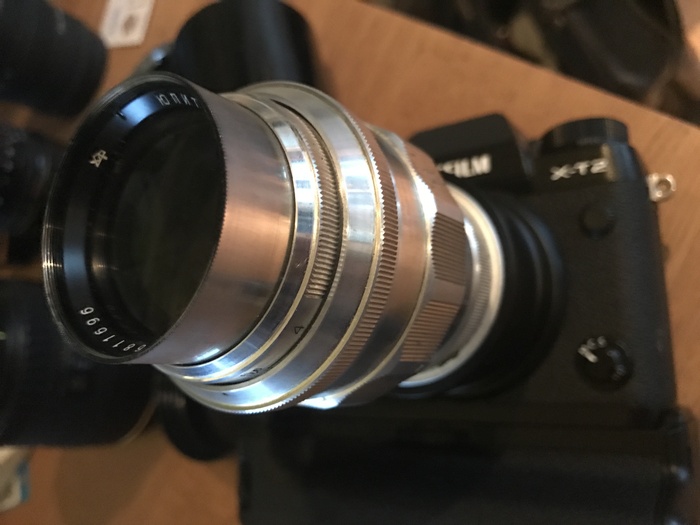 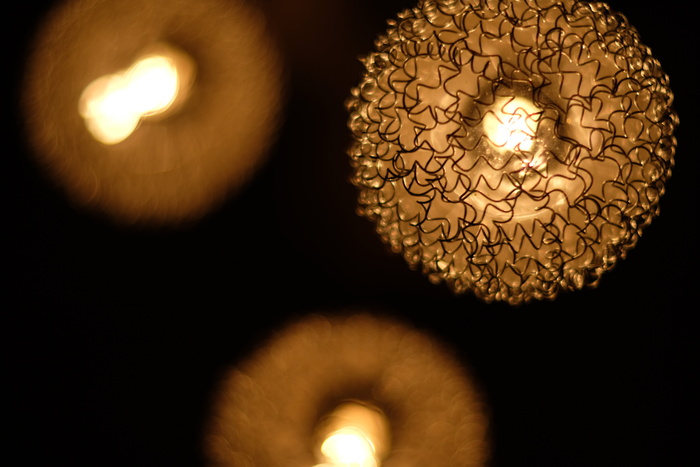