Meg Bitton, a photographer renowned for her portraits of children, is receiving backlash online for posting images of youngsters — some allegedly aged 11 — wearing revealing outfits, smoking, and in t-shirts supporting cannabis. In an age of children growing up and being sexualized too fast, how far is too far?

Bitton is widely regarded as a respected children's photographer, with tens of thousands of followers across various social media pages. Over the last few days, though, a number of photographs have been circulating the Internet for all the wrong reasons. Many are deeming that some of her recent work is highly inappropriate, largely due to the overtly sexual nature, despite her subjects being children.

In one, two young girls are seen pressing themselves against each other, while one has her hand on some money that is tucked into the other's shorts. In a second, Bitton has positioned her child subject in the front seat of a van, wearing barely-there underwear and smoking on a cigarette. Another sees a child so young that she’s likely not even in double digits, bearing a top promoting the legalization of marijuana.

It’s an increasing trend, treating children like adults. Earlier this year, "Lil Tay" gained notoriety online and was giving TV interviews for simply behaving outrageously on Instagram at the age of nine. Meanwhile, celebrities like the Kardashians parade their offspring around in outfits tailored by high-end fashion houses. But these images feel incredibly distasteful and a step too far. Bitton’s subjects are likely old enough to be consciously aware of many of the themes portrayed in the photos. However, positioning them as the subjects within them is in poor taste. It risks putting incredible pressure on these children to be or behave a certain way before they’ve had a chance to figure out who they are as people or the consequences of such behavior. It blurs the lines of how it is or isn't acceptable to behave in front of a minor.  And it certainly calls into question the legality of such images; many online are calling it gross at best and pedophilic at worst.

Setting aside the sexual aspect of such images, there is nothing realistic about these photos. They aren’t artistic, documentary style images that capture the livelihood of innocent children. They depict something unrealistic and forced. When was the last time you witnessed 11-year-olds in such pants, gallivanting in the streets, and leaning close to each other in a provocative manner? Never, I hope.

She claims she is simply depicting a normal child’s evolution into adulthood. Thankfully, the Internet disagrees. Sexualizing children is never justified.

At the time of writing, her Instagram is set to private.

Opinion / October 8, 2019
Ever Wanted to Start a Photography Youtube Channel?

It seems you don’t understand. It’s a legal definition, sex labor under 18 is human trafficking. It just is.

It seems from my answer that I understand. And even show you one logical problem in legislation.

Modeling is not a sex act as described in 18 U.S.C § 1591. Nor do these photos come close to child pornography.

You crack me up, trying to misconstrue things, sweetie. I see you have a fixation with logic, but the concept I was trying to present to you is pretty simple, no deep logic involved. Do I need to repeat it for you?

There was also an image of hers in this thread (thankfully was removed) of a topless little girl blindfolded on a bed with a hand over her mouth and another of a little girl with a flogger in a mask but, that is totally innocent too, right Alexander?? Not everything is so black and white.

"There was also an image"... Where? I see no reasons just to believe your words without any proofs from your side, especially knowing that you just came here to comment on one sole post.

Alexander Petrenko You don't have to take my word for it. I don't save that garbage and I certainly would not re share. Someone on this thread had posted one of the actual pics here a couple days ago and it was rightfully removed. You can however, confirm others have as well online. It is mentioned a few times in the comments section of the Petapixel article online and on FB. I was a part of Megs personal FB group, and saw the images there (which is why I removed myself), so they are really hers. But again, you are free to do your own research

Oh, its also mentioned again here in part 2 of this article https://www.jodieotte.com/business-of-photography/exploitation-lies-phot...

Also, if your a part of the LLF group on FB, it's been talked about there too. 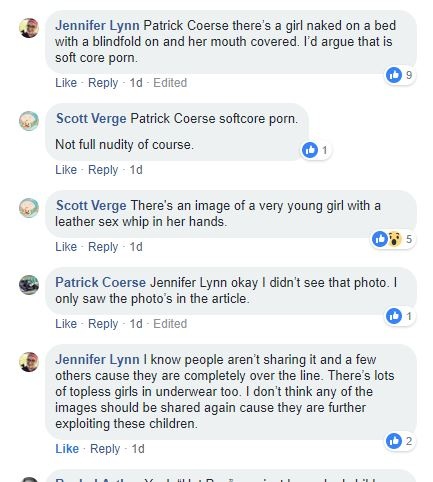 Parents need to be reported to CPS!!!

Or NPS. Depends on which camera they use.

PS: Probably you have no idea what CPS means for a photographer...

There is a much larger problem here and it is huge in my opinion. Meg Bitten has thousands of followers - thousands. She has lots of child models whose parents were and are completely on board with her using them as subjects in these photos. Is the problem perhaps larger than just the photographer? What does this say about our world? After all Bitten can not exist as a photographer without her consumers and it looks like they are flocking. None of these parents are being forced to offer their children for use in her images. What is that saying?

I mentioned the parental involvement in the sense that these youngsters cannot sign a model release, it hast to be signed by a parent or guardian. I consider this complicity in the exploitation of minors. My guess is that these parents are hoping that their youngsters are "discovered" and will reap the benefits of their new found income.

She's nothing but a bottom of the barrel 1 trick pony and snake oil salesman with blind cult of followers that are just as disgusting as her. I'm glad this is hitting critical mass.

Like you have a damn clue about who Meg these images. All your doing is making yourself look foolish.

Gross. Children cannot consent. Period. No adult has the right to put them at risk.

At risk of what ?

The permanence of the internet. Facial recognition. Ridicule. Bullying. Normalizing ideas and situations for which children are not yet equipped to process in healthy ways.

I think you're confusing experimentation in an age appropriate and safe setting to posting images on the internet where you surrender control of the child's privacy to the worst person who owns a computer.

Risk of being subjected to realities of this world.

Risk of their images being traded on the dark web by pedophiles, which Meg acknowledges and finds funny?

You are aware that child pornography does not have to involve "touching" or as you classify it, pedophilia.

To say "what is the harm done to the children" then makes the entire issue of child pornography one that is only defined as actual physical contact in the image. Perhaps simple is how you see things, but many of us don't.

The greater issue is how these images were created and why. Yes, the girls may have been consented by their parents and only see it as a "dress up" photo session. But these are not photojournalism images, that are depicting reality as it may exist for some girls, and for you to downplay the sexual suggestiveness only shows a disregard for how the sexualization of young girls is never harmful if "no child is touched."

The world is not as simple as your views.