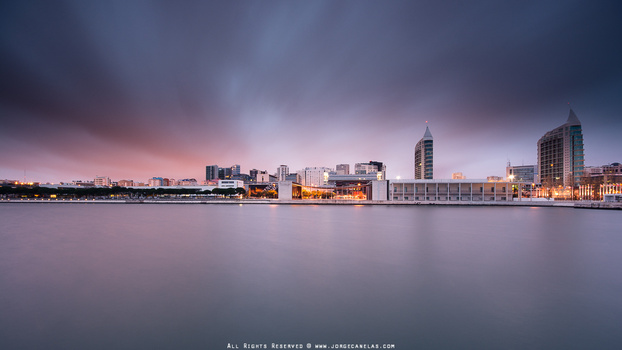 This is Nation Park ( Parque das Nações ) , this photo was taken yesterday @ Sunrise in a very Storm day, rainig a lot, but I had a "break" for 10 minutes and I had time to do this picture, I lef you some "History" regarding this location .
A leisure, commercial, and residential area since the 1998 World Exposition it covers an extensive area in northeastern Lisbon next to the Tagus estuary, formerly used for mainly industrial purposes.

The area underwent a tremendous transformation in the 1990s when it was chosen as the location for the World Exhibition. After the exhibition, the area got its current name (although it is not uncommon for the Portuguese to still refer to it as "Expo"), and more transformations occurred such as the new Vasco da Gama shopping mall, the Lisbon's International Fair complex, hotels and many new office and residential buildings. Many attractions built for the Expo '98 remained and keep drawing visitors, such as the Oceanarium, one of the world's biggest aquariums.

Taking advantage of its geographical position, Parque das Nações also have a brand new Marina, Marina Parque das Nações featuring 600 berths and modern infrastructures, a river pier for cruises or historical vessels and an exclusive pontoon prepared to receive nautical and on land events, and a spot for bird watching as it is sited in the Tagus Estuary, one of the largest and diverse estuaries of Europe.

An estimated 21,000 people currently live in the Parque das Nações, which was shared between the Lisbon and Loures municipalities until November 2012. After a movement of citizens requesting the Lisbon's half to annex the one belonging to Loures, thereby integrating the entire area within the Lisbon municipality, the area is now inside Lisbon and it's the city's most northeastern parish.