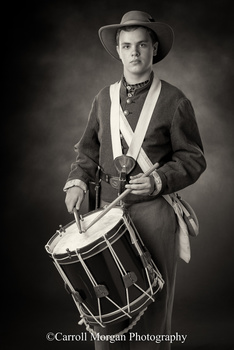 Private Noah Crawford, Civil War Reenactor in sepia.
“I am a member of the 19th Virginia Infantry, Company B (“The Albemarle Rifles”), which is part of the 3rd Regiment, ANV (Army of Northern Virginia), re-enacting unit.

At Gettysburg, the 19th was part of Garnett’s Brigade of Pickett’s Division, and participated in the famous “Pickett’s Charge.” The regiment lost about half its strength in the doomed assault as well as its battle flag, which was captured at “the Stone Wall” by the 19th Massachusetts. Three days before Appomattox, the remnants of the 19th Virginia were surrounded and surrendered at the Battle of Saylor’s Creek. Though a total of 1,600 men served in the regiment at some point during the war, only 29 men and 1 officer were present to receive paroles when the Army of Northern Virginia surrendered at Appomattox Court House."