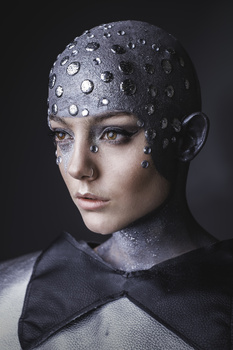 Nicole got in touch with me to do a shoot inspired by an outfit she saw on TV, RuPaul's drag race I believe the show is called. The silver bald cap and makeup happened organically with no particular plan. MU was by my wife Maria, with the costume made by seamstress Dovile Strydom.

Nicole has since been featured in Rolling Stone magazine & appears globally on billboards for Apple's "Shot on iPhone 6" ad campaign - I like to be reminded that I had absolutely nothing to do with this success :(