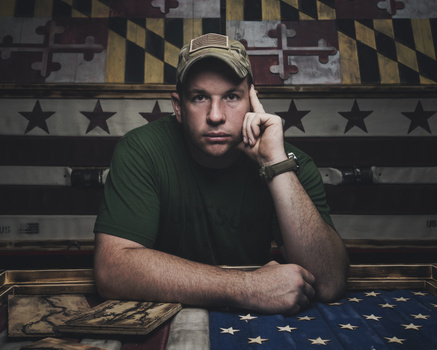 My friend is a fellow firefighter who also makes reclaimed firehose flags, distressed wood flags, lichtenberg figures and various other items. I shot this editorial style portrait for him to use in some advertising he plans to do in the future, mostly via social media. I wanted something that would put him as the focus (something useable as a profile picture) while simultaneously showcasing some of his work.

The shot itself was done inside an old firehouse. The American flag was placed on a folding table with some of his smaller lichtenberg pieces while the DC and MD flags were propped up on a table immediately behind him. The MD flags were leaned back slightly so that they would catch a bit more light. I have some bits shots of the set up as well.

As for lighting I used 2 PCB Einsteins. One was boomed camera center about 2 ft away and about 1 foot above the camera. It was gridded to control the beam and keep it focused on him and a diffusion sock was used as well to soften the light a little. The second light was boomed out 2 ft above the flags and just off center camera light. This was shot a few stops lower mostly to add just a touch of light to the shadows and to help highlight the texture in the flags.

Image was retouched by me in Photoshop CC.