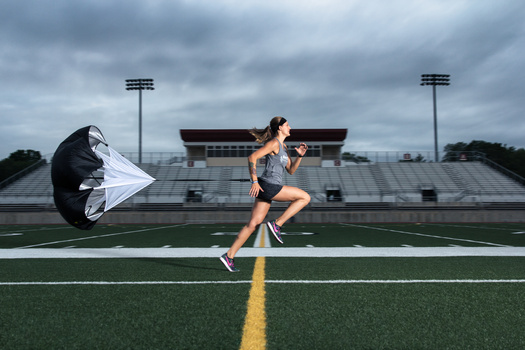 This is one of my favorite images from a photo shoot I did recently with a couple of friends. We had this shoot planned for several weeks. I had hoped for a bright, sunny, golden evening but instead what we got was an overcast sky on the brink of rain. We decided to make the most of it and I'm glad we did.

Lauren is a personal trainer and she wanted an image that highlighted the speed training she offers her clients by doing some shots with the parachute. I loved the idea.

This shot was from later in the shoot. The conditions were perfect but I knew it wouldn't last long at all as it was quickly getting dark.

I wanted a shallow depth of field and some motion in the image. I knew it would be a challenge but I composed this shot and then asked Lauren to run across this spot. I panned my camera as she ran by hoping I could press the shutter at the very moment she crossed the line so that the image was composed perfectly. This image was our very first attempt and it turned out great. No cropping or straightening needed. We actually tried several more to be sure we got the shot but our first attempt was the best.

To light this image I used a 48” octabox at camera right. It was angled at about 60 degrees inward. The one unique thing I did with this shot was to position the light a little lower and feathered the light slightly upward.

Typically, I would position my light higher and angle the light down but that usually results in a more distinct hot spot on the ground. There is nothing wrong with this but for this shot I didn’t want that. I wanted a nicely, more evenly lit subject and ground. Angling the light up, and positioning it farther away, was fairly effective at avoiding an overly harsh hot spot on the ground, but, ultimately, you can’t escape the physics of light. The ground was still a little brighter to the right. A graduated filter was sufficient at completely evening out the ground.