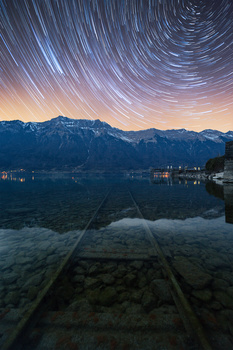 I had this picture in my mind with star trails around Polaris and those rails leading right into the scenery. I shot the foreground during blue hour because there were lots of light sources around me like street lamps or bicycles passing by so by shooting the foreground during night it would be very difficult to get a clean shot without any distractions in it. Furthermore I was able to capture more detail by capturing the foreground with some ambient light. There was a street lamp about 10 meters behind me casting a shadow of my tripod which covered almost the lower half of my image. So I was glad I already shot the foreground during blue hour when the lamp was not switched on. When the stars became visible the sky was still covered with lots of clouds. So I decided to wait in my car for the clouds to disappear. The camera was running the whole time in case the clouds would suddenly disappear. From time to time I stepped outside to check the sky and I constantly checked the weather report as well. After around 4 hours of waiting there were only some clouds left on the horizon so I decided to let the camera run for another hour and hoped the clouds would stay away. You can clearly see the orange stripe just above the mountains which are clouds illuminated by light pollution from another city.