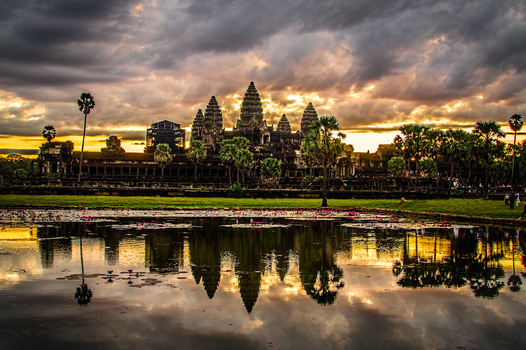 Angkor Wat (Wat temple) is the central feature of the Angkor UNESCO World Heritage Site containing the magnificent remains of the Khmer civilization. Angkor Wat's rising series of five towers culminates in an impressive central tower that symbolizes mythical Mount Meru. Thousands of feet of wall space are covered with intricate carving depicting scenes from Hindu mythology. The most important are the Carved Bas reliefs of the Hindu narratives. They tell a story about gods fighting demons in order to reclaim order which can only be achieved by recovering the elixir of life known as amrita. The gods and demons must work together to release it and then battle to attain it.

Log in or register to post comments
More from J B
J B
The Mobros at The Royal American in Charleston S.C
0
J B
Vernazza Italy
0
J B
The Dark Hedges, Ireland
0
J B
Stonehenge, U.K.
0
J B
San Sebastian Spain
0
J B
Church on Spilt Blood Saint-Peterburg Russia
0
J B
Ha Long Bay Vietnam
0
J B
Siem Reap Cambodia
0
J B
Angkor Wat
0
J B
Eiffel from Notre Dame
0
Related Photos & Videos