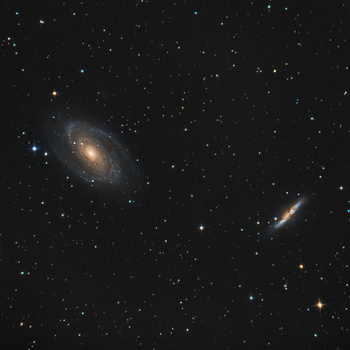 A photo of M81 (or Bode Galaxy, on the left) and M82 (or Cigar Galaxy, on the right). There are two galaxies located about 12 million light years from Earth. It is estimated that the size of M81 is slightly lower than our Galaxy containing a number close to 250 billion stars. The interaction between the two galaxies led to the formation of hydrogen gas filaments, which were partially depleted on M82, and increased its star formation activity. Processing of 150 calibrated shots, obtained with Nikon D5100, SkyWatcher 150 / 750PDS and eq5 motorized equatorial mount.

Love your astro shots. I also have a D5100, as well as a D600, and just recently just got into untracked shooting with standard optics and stacking in Deep Sky Stacker. My stuff so far is pretty crude. :-) I want to get a portable tracker like the Skywatcher Star Adventurer or the iOptron SkyGuider Pro units, but I've read that both of them have misaligned polar scopes. Trackers like yours are great but are big and heavy. I'd really like to get one of the portable units with a properly aligned polar scope. Keep up the great work! :-)