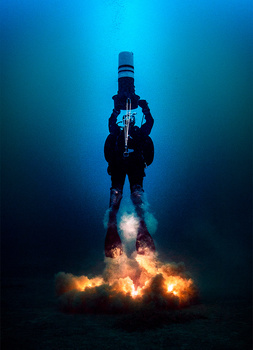 The image ignition. It is my idea realised on lake Nove Kosariska near Bratislava. The lake is artificial, created by excavation of gravel. It is 40m deep. Usually there is very nice visibility through whole year. The bottom looks like moon surface with very fine silt easily disturbed by movement. So I had an idea. To use it to work for me. I have Divers Propulsion Vehicle (DPV) or underwater scooter, and I wanted to use it on this photo. The idea was to create photo where the sediment from bottom will create for me the illusion of smoke and flames from rocket engine. We tested it several times. The diver on photo has to train for several dives to make a perfect pose. We created lots of test photos, I told her after every each dive what to change and how the scooter and body should work together to achieve the perfect position and the right disturbance of silt from bottom. The key was to leave scooter turned on for a while just few centimetres above bottom and after the sediment rise move the scooter up over the head and straighten the body. Then I will get the best effect and body position. The next big thing was to lighten the sediment. So I can get the illusion of flames. I used 3 very strong underwater video lights. I placed them in exact position. Two on sides and one pointing directly up. Diver has to land on them and turn on the scooter. After each try we have to move further to clear water. It was created deep, in 27m so we have to plan the dive as well. We usually had 30 minutes which means just 3-5 possible tries for each dive. I had 2 more support divers to take my camera and take lights to new place. Then I placed the lights take back the camera and after the diver was ready on place we can start again. Usually 7-10 minutes just to setup scene and then 1 minute to take photos from which just one was the right one. We did approximately 5 dives to achieve the photo I was happy with. We have to plan our dives to be exact on special sun location, and it must be taken in correct orientation to sun to achieve all important details and have the right balance the ambient light and the light from underwater lights. After all I was happy we did it, because at first, it looks almost unreachable.